Any way to have a single option poll with just one option to choose from?

Maybe an odd request, but I’m interested in creating an “opt in” poll that just has one option, but the poll is throwing an error. Is there any way, even a workaround, that can work? 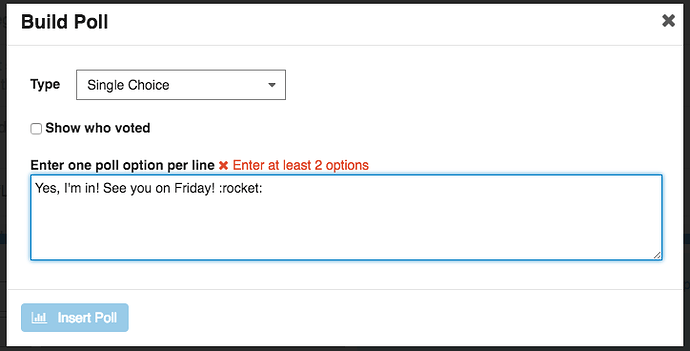 Put in a fake second option, delete it once it is in the composer and see what happens?

good idea but I tried that. Just tried again right here but it complains when I save the post.

Install: Follow the plugin installation guide. Features [image] [image] With this release comes a few enhancements. You can disable the plugin in its entirety from the Admin > Settings area (strike through still gets processed, but the checkboxes won’t render and won’t be clickable) You can keep checking/unchecking boxes on the same post without having…

But AFAICT, it won’t.

Maybe make a “no” option and then use CSS to display: none it?

Then there will likely be a “100%” showing, so it feels like this is getting into new plugin territory to me.

But you can’t un-like to say you won’t, which I think is probably also a problem with a poll.

Another solution is a wiki, maybe.

@tobiaseigen if you want two options, instead of one, then a poll already works.

Thanks, all! Really appreciate all the suggestions.

In the end, I decided to just bag the poll in this case. Interestingly, I got a handful of likes already to the topic without even asking for it, so people seem enthusiastic and are showing it.

I do think that down the road it might be of value to allow one option to choose from, but it’s not a high priority for me. Perhaps someone else wants to make it possible at some stage. The 100% showing issue seems to be the only potential snag, beyond the UX tweaks that would be needed.

Then there will likely be a “100%” showing, so it feels like this is getting into new plugin territory to me.

should only one poll option be possible @sam @eviltrout? I guess that could be OK?

Yeah I agree for this specific use case it makes sense.

Ok @eviltrout I assume this restriction is fairly trivial to relax, so you can assign it?

The original problem is solvable like any other RSVP where you want to know numbers. It’s usually worth knowing who else would have liked to be there.

Edit: I get it Now. Showing the tally would be useful.

Edit again: I guess the single poll option makes it easier to automate because there is only one result.

It is simple to allow only 1 option for polls. We do need to add a clear vote button however.

Generally this is not an issue with other polls, because the options cover the spectrum of answers. With only one option, you cannot un-vote currently.

Is a clear my vote button something we should show on every poll?

No, just ignore that for now, if you set up a single option poll, undo of vote is not possible. That’s just how it is.

I just merged a PR that allows for single-option polls