Can't run the launcher to install Discourse on CentOS 7

I followed this guide. (I’m on CentOS 7.): http://www.howtoinstalldiscourse.com/how-to-install-discourse-on-centos/
When I try and run the command
/var/docker/launcher start app
I get this error:

Welcome to my world. I had the same issue when trying to do a local setup. I forgot how I got passed this one, but in my case (I was doing an Ubuntu install) I ultimately gave up and downloaded an ISO with Docker and Discourse pre-installed for a local test than got a Digtialocean droplet to run a real test on. The guys here are pretty helpful so hopefully someone can get you going where I failed, but let me know if you need that image

I hope so. And I hope soon. I have to go in a few minutes here, and I was going to let it run whilst I’m gone.

Can you walk me through it? Like how to install it properly? (Thanks in advance.) 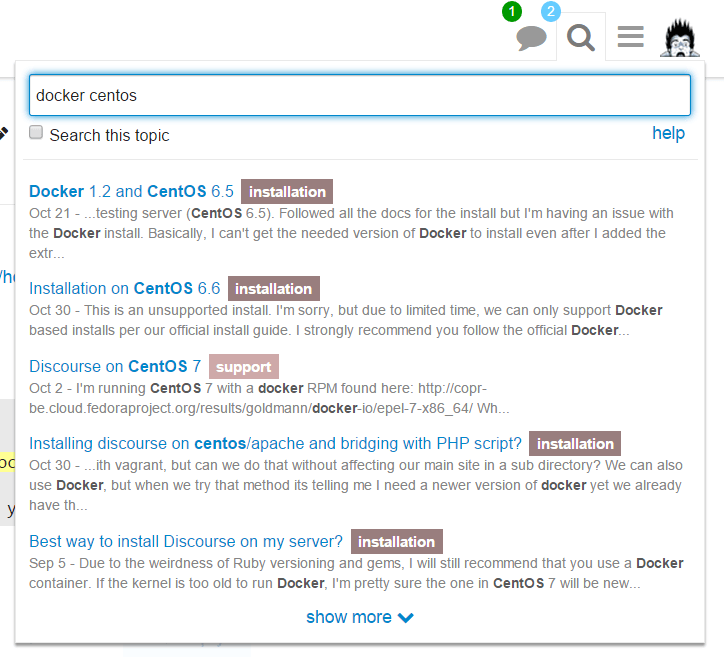 I know. But I have Centos 7, and I can’t find a tutorial that works without an error. ;p.

Ok, so now I’m getting this error.

All I did was yum install docker
(I’m on Centos 7)
Can you just send a link to a tutorial?

I don’t have one… my recommendation is to drop CentOS and use Ubuntu Server, following our standard install guide. It’s all the same Linux underneath anyway.

Here is how you install Docker (logged in as root) in our guide:

Either your platform is not easily detectable, is not supported by this
installer script (yet - PRs welcome! [hack/install.sh]), or does not yet have
a package for Docker. Please visit the following URL for more detailed
installation instructions:

y u no work launcher

And I can’t. My other dev uses it. Probably gonna buy the $5/mo here. If I just run Discourse on that, (with all of it’s requirements) and Ubuntu, will it work smoothly? Pricing on DigitalOcean - Cloud virtual machine & storage pricing

No, 1GB RAM is required for a live site. 512mb is OK for single user testing only.

I just bought another VPS.
It’s from OVH.
It has Ubuntu 14.04
It has all of the requirements. Followed this: http://www.howtoinstalldiscourse.com/how-to-install-discourse-on-ubuntu/ tutorial.

AND I GOT THE SAME DAMN ERROR.

Do you have Skype or something? If your able to install it for me, that would be great, because I don’t want to waste any more money on VPS’s. I also don’t know how to remove the old Docker/Discourse.

Please for the love of God stop using those third party guides that are not official.

Alternately sign up for the $99 install on our buy page.

I already tried your guide. I got the docker -d error on the wget docker command.

Try posting on https://forums.docker.com/ and mentioning @SvenDowideit, Docker is meant to be trivial to install everywhere, if the official documentation is somehow broken at Redirecting… this needs to be fixed ASAP.

Docker provides instructions for how to install Docker on CentOS7: https://docs.docker.com/installation/centos/

To be clear, the root issue here is super low cost hosting with partial virtualization which uses an old Linux kernel on the host that is incompatible with any filesystem Docker supports – realistically (and sadly) only aufs at this point.

Over time old kernel versions should fall away and at least one bleeding edge Union file system will make it into Linux proper.