Comments and replies are shown double

Here’s an example, it’s about the way comments and replies are presented.
On the picture below, you can see that when someone replies to a comment, a button “Replies” appears. But then also, the comments are doubled below in another section of the thread. 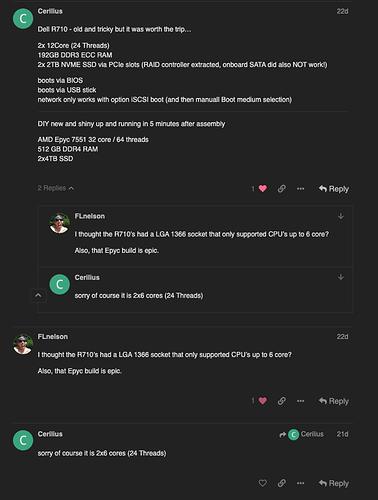 Can the additional (doubled) comments be removed and just keep the replies?
With this simply change, the forum would be way more user-friendly and the conversations would be flowing. Sure there is a solution for it, but we can not find it.

We did find the " Removal of full quotes from direct replies" but that doesn’t solve our problem.
Thanks a lot for the support

That’s a pretty interesting line of thinking, I actually like this idea. When the replies are shown directly beneath the post, hide them in the rest of the post stream.

Possible caveat:
It will only show replies, not replies to replies.

Since post C is also a reply, it would only be shown in the reply section such as post B and not in the comments.

That won’t work, this could possibly be a thousand posts.

I agree it could be a thousand of posts, but as long as its a reply on a specific post that would be ok, and if you don’t want to read those replies, you can close them all with replies button. But I agree there are 2 possibilities and 2 preferences, just wondering if it is possible or not, if it is an option somewhere .

just wondering if it is possible or not, if it is an option somewhere .

It’s not. Discourse presents all posts in order of their being written. When you click the “replies” button you are effectively asking that the posts be displayed twice, so they are displayed twice. Discourse just doesn’t do threading. It’s designed to make you read all of the comments, in order.

Perhaps Richard can think of a way to change that, but it’s a tall order.

It’s not. Discourse presents all posts in order of their being written. When you click the “replies” button you are effectively asking that the posts be displayed twice, so they are displayed twice. Discourse just doesn’t do threading. It’s designed to make you read all of the comments, in order.

To be honest in that case I don’t really see the utility of the “replies” button.

It’s to let you see what the replies are and indicate that there are replies, just like where the reply is, there is a link to the post that it’s a reply to.

I had a community that struggled with this duplicated replies issue, which took me quite a while to understand just what they were talking about. Eventually they got used to it, or so it seems.

It is definitely a feature that people coming from other forums find confusing.

And if you do want to hide the replies button, you can do it with CSS. It might be a good idea since people find it confusing. You might be able to come up with some words to use instead of “replies”, like “show the replies that are shown further down below”, but figure out how to say that in 2 or 3 words.

The most obvious case for the embedded replies is when there are lots of posts in-between the original post and a reply, it’s essentially a short-cut to far-flung replies.