On reddit, when you want to to capture suggestions and wanna minimize bias they provide “Contest Mode”:

Different from reddit, we would do this at category level, randomizing topic sorting in a category and hiding votes.

After the contest is over, the admin can revert the order to votes.

What would this be for? It sounds very confusing and I don’t understand the use case? 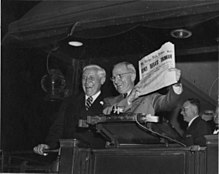 By providing information about voting intentions, opinion polls can sometimes influence the behavior of electors, and in his book The Broken Compass, Peter Hitchens asserts that opinion polls are actually a device for influencing public opinion. The various theories about how this happens can be split into two groups: bandwagon/underdog effects, and strategic ("tactical") voting. A bandwagon effect occurs when the poll prompts voters to back the candidate shown to be winning in the poll. The ide...

When discourse-voting is used for a time-limited event, like “submit your new product idea this week” or something like that, bandwagoning can be pretty hard.

Basically it means to hide most of the data (like votes, replies) from users during a contest so that each user can reply or vote as a neutral person. Otherwise there’s a chance that the people will start to participate in that competition and act according to other people’s activity rather than doing what their mind says.

What would this be for? It sounds very confusing and I don’t understand the use case?

Yea, the Reddit example was probably the best example: If you have a subthread to eliminate biased behavior, bump manipulation, etc.

this would only apply to polls, not topics, yes?

Well, the use case a friend of mine described was using the voting plugin, where each topic in the voting is a long and complex proposal.

Everyone can submit a proposal (by creating a topic in the category with the plugin enabled) and vote for a month.

Having “contest mode”, during this month, would help with the bandwagon effect.

After one month, everything is reverted to normal, and the winners and votes are public, as usual.

PS: If this was not clear by the category, this is a proposal for a feature inside the voting plugin.

Is it now possible to revert everything to normal after a specified time or manually?

The feature discussed here was never implemented, this is just an idea for now.

Sorry to reincarnate this topic, but does anyone have any leads for something like this?

We run monthly competitions with entries (user topics) that users can vote on and would love to randomize the entries per-user in case some users don’t vote on all the topics / remove bias.

The issue with the voting as it stands now is that topics that are spammed with comments rise to the top and may get more attention/biased voting.

Example is here where we want users to vote on users topics for their favorite: Fire vs Ice - Real Time VFX