Creating a banner that only 1 group can see, while the other groups don't

I wrote about this in the Versatile Banner Plugin Topic but I realized it might work better as it’s own post, so here it is:

Thanks for the awesome tool.

I’m so close to creating what I need. I don’t know if anyone has any ideas, or if this could be implemented into versatile banner.

This is the banner I created

If you are already a member you can close this message

However, that’s still a flawed solution.

Another issue is that the “Learn more” button link is a private link for members in “Trial Mode” since paying members don’t have access to the group where that link takes the user.

Does anyone know of any work arounds I can do to make the banner only appear to members of the trial group?

I’d love to find a solution with versatile banners, since it looks great, but I’m open to other ideas!

My CSS is improving, though still rudimentary

, but I think you could do something like this as long as the Trial group was set to be their primary group:

So the first bit hides it from everyone, and the second then shows it to members with the ‘trial’ group as their primary.

thank you so much! I’ll experiment with it

unfortunately I do have another primary group set-up for some users. Do you think primary group is the only way? is there no way to just make so as long as someone belongs to “trial group”

If it must be primary, that might be a sacrifice I might have to make since this is a genius solution

@JammyDodger I totally forgot the fact that I need users without accounts to also see the banner.

I totally forgot the fact that I need users without accounts to also see the banner.

It seems that anon is a class you can use there as well.

So you could add something like this to the bottom:

Do you think primary group is the only way? is there no way to just make so as long as someone belongs to “trial group”

I think I have seen a way to insert a class, though its not something I’m fluent in.

I’ll see if I can find the topic I’m thinking of, and check I’ve understood it properly.

that’s be incredible, your CSS trick worked incredibly well! the only missing piece would be to achieve it without primary-group, but just as long as someone belongs to that group

This component should allow you to expose non-primary groups as body tag classes: 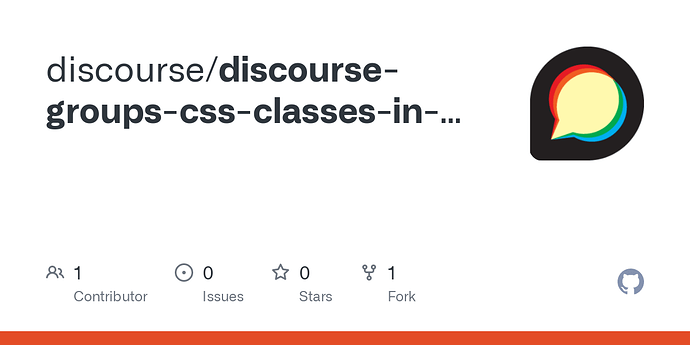 Contribute to discourse/discourse-groups-css-classes-in-body development by creating an account on GitHub.

This will only work if the users of the trial group have permission to at least see that the group exists.

thanks a lot I’ll try that out, that might be the solution I need! thanks @tshenry and @JammyDodger for the incredible help!