(And off topic, further to this post by @simon , I can’t seem to add a data-explorer tag to this post?)

(And off topic, further to this post by @simon , I can’t seem to add a data-explorer tag to this post?)

I think the approach I suggested in that topic needs to be improved. One problem with it is that only TL3 and above users can tag posts on Meta. That means that the majority of the site’s users wouldn’t be able to follow my instructions. The other issue is that we’ll end up with both unanswered topics and answered topics having the data-explorer tag. That won’t help much with searching for queries.

Sorry for the late answer. I got caught up in the question about how to organize Data Explorer queries on the site. Using the data-explorer tag seems like the ideal solution, but topics that contain a Data Explorer query will need to be tagged by a user with TL3 status.

I think that something like the following query will give you the information you’re looking for:

The LIMIT 100 statement in the last line of the query could be adjusted or removed if you want more results to be returned.

Interestingly, the topic with by far the most recorded read time on Meta is DiscourseConnect - Official Single-Sign-On for Discourse (sso). It’s currently at 126048 minutes.

Is that formula correct?

Ah, that could explain the issue.

I’m guessing total_msecs_viewed is the wrong column to use here?

You can use the average time that the users take to read the topic.
In that case, you can just change the SUM function to AVG, it would look like this:

Thanks for the suggestion @michebs but I’m afraid that one is way off the mark too.

But that would mean, on average, a person takes 438 minutes to read that top topic? That seems unlikely. This may sound silly, but did you have enough 0s in 60,000?

Edit: Or maybe the AVG includes all the re-readings of a topic too? So once through would be 61 minutes, but actually users spend on average 438 minutes in there.

Though now I’m quite interested to know how the Estimated Read Time is worked out for the Summary, as ideally you’d want those to match. Even shrinking those by a factor of ten would only ballpark it.

I’m quite interested to know how the Estimated Read Time is worked out for the Summary, as ideally you’d want those to match

I had a little search, and found this "There are 84 replies with an estimated read time of 0 minutes." - #9 by nbianca.

I struggle with deciphering these things, but it seems it’s uses a word count x time figure (plus a minimum time to cover posts with no words, like images).

There was also this one which gave a hint as to what the final value may be called: (though its old, so may have changed?)

Not massively helpful, I’m sure, but thought I’d share just in case.

I hope you get the answers you’re looking for.

I’ve had another look at this, and it seems (in its simplest form) to be topic.word_count multiplied by the ‘read time word count’ admin setting (default 500 word/min). So I think this query would produce the top X ‘longest to read’ topics:

Though there’s also the alternative ‘4 second minimum’ too: (amount of posts x 4)/60. Which is there to account for photo topics with no word count. So it works out both, and displays whichever is larger. But I haven’t quite worked out how to add that in yet.

Unfortunately, I haven’t got a large enough site to test it out on properly. It seemed to work on a small test sample, but it may need tweaking.

Edit: I added in a ‘limit’ parameter to make it closer to the OP spec.

By George, I think he’s got it!

@JammyDodger I ran your query, here are a few screen grabs for reference. 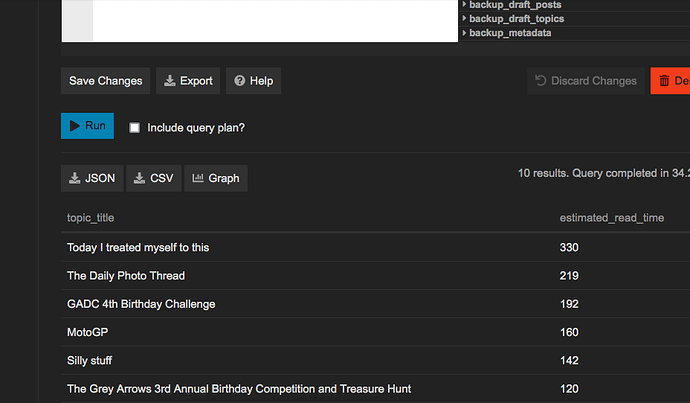 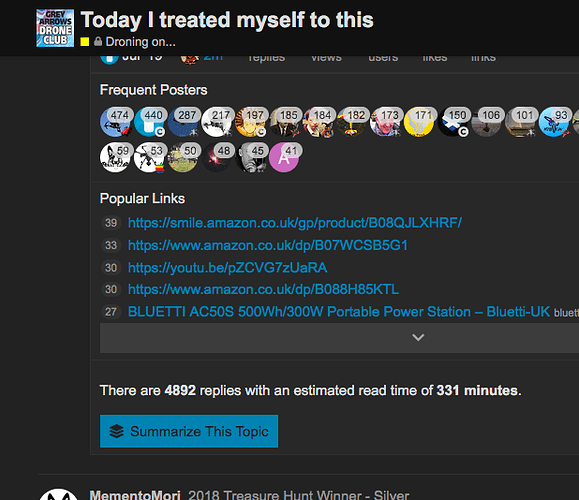 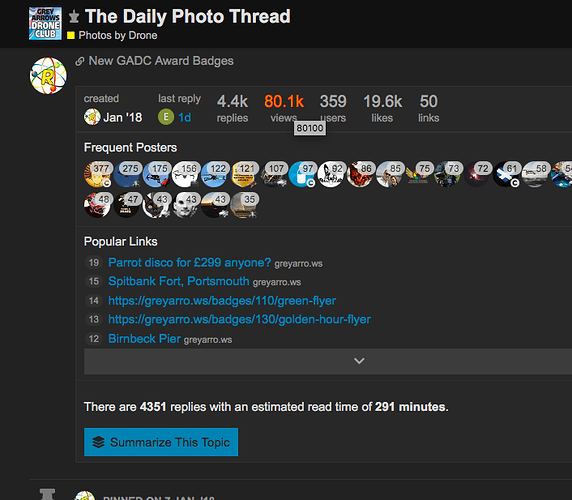 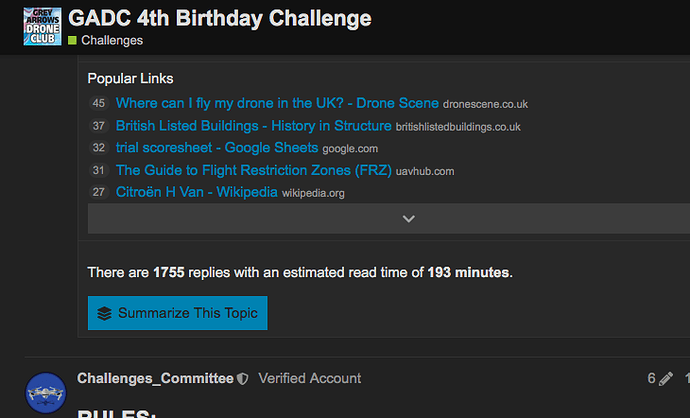 There are a couple of numbers that don’t quite match, but it’s really close!

Seem like I definitely need to work out how to add the photo one in.

I’ve not given up yet.

I’ve had another go.

I’m not 100% on this one, as I don’t have a large enough sample to test it against, but it’s picked up my test topics.