But for anyone else wanting the swish new functionality, you can update the theme component from its customise page: 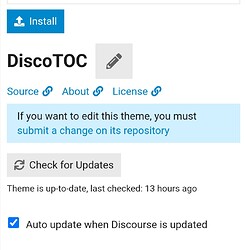 Hmmm, just thought of a scenario where a user doesn’t want to have a TOC in their topic, is there a way to revert that?

I like the tag element of it, so you could have a specific tag for TOC, and then remove it again if one is not desired?

I love the idea of automation, almost everytime and everywhere.

I haven’t updated DiscoTOC yet, but if it can take away option to insert TOC from toolbar when TOC comes from category it would be really nice touch. Like cherry top of the cake

Or, do opposite thing what @albert_vu asked — there would be an option insert something like !toc if you understand what I’m meaning.

For ordinary users it could be confusing, though.

I can live with that but TOC is quite unneeded when there is somethng like only one or two headers. Because when there is a TOC a long post must be scrolled to bottom to find out… what is it in discourse-lingo… well, possibility to scroll dates. But that is quite rare edge case I reckon.

What is the purpose of the anchor icon setting?
I could not find it anywhere. Was it removed in REFACTOR: General component overhaul (#19) · discourse/DiscoTOC@20366c6 · GitHub ?

Awesome component! However I’ve found a bug in how it parses and renders TOC’s which contain escaped and certain characters.

For example it doesn’t render these headers correctly

does it support generating the toc across the whole topic (not limited to the 1st post), like if I have a in-progress article that keeps updating with in one topic(by replying),will it work?

No, it only supports headings from the first post of a topic. (Additionally, as soon as another post is in view, the TOC disappears.)

I think this was mentioned previously, if I understand it right:

I have posts that have extra DIVs in their bodies. For example, On Storytelling - Public - Podcaster Community The DIV which triggers the TOC generation is inside a DIV… and TOC notices that. But other headings, inside DIVs, don’t seem to get noticed by TOC. [Screen Shot 2022-02-02 at 09.45.01] …not the best screenshot. That’s an H2 in an arbitrary/just-for-styling DIV which does not appear in the TOC. …not shown is the <div that triggers the TOC, which is inside the DIV with the crazy att…

We target the immediate child headings to exclude headings in quotes or oneboxes and other elements in the Table of Contents. Otherwise, we’d have to exclude them individually, which can be tedious.

So as far as I can tell basically there is no solution.

Is there a way to make the TOC ignore a header?

If you don’t care about the semantic, you could create a data-h2 attribute or something like this on a span that mimics/extends the h2 style.

You can try my fix XD

As a non-latin language speaker, this theme component was not working well on my forum until I made some changes in javascripts/discourse/initializers/disco-toc-main.js

I used a huge random number instead of a title slug to make the link; it works fine in non-latin texts.

As you can see, it’s harder to get two titles confused than to win the lottery XD. 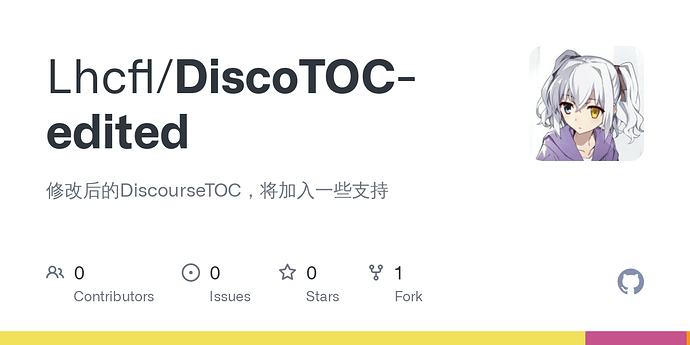 修改后的DiscourseTOC，将加入一些支持. Contribute to Lhcfl/DiscoTOC-edited development by creating an account on GitHub.

Since Disco TOC is one of the theme components in the default list, I’m assuming this is an appropriate place to make a feature request. It currently only works for the OP. I’d like to be able to add a TOC to a reply. Why? When we do a webinar, we’ll announce it to the community with a post. After the webinar, we follow up with a reply in the same topic that contains the link to the recording and answers to all the questions that were asked during the webinar. We do this partly as a way to cov…

But the TOC is not visible in this case. How can it be fixed?

It also happens to me that the TOC doesn’t work if the number of headings is less than three.

I would second this feature request. I can see that this might result in long TOCs, but at least one could add an “expand all” button or Link?

And I’d really appreciate it if the option “expand all” would be developed soon.