Hi to all, how can I install Discourse on my local ubuntu pc for test purposes many thanks.

This guide covers installation instructions in development environment, for a production guide see: How to install Discourse in production So you want to set up Discourse on Ubuntu to hack on and develop with? We’ll assume that you don’t have Ruby/Rails/Postgre/Redis installed on your Ubuntu system. Let’s begin! Although this guide assumes that you are using Ubuntu, but the set-up instructions will work fine for any Debian based distribution. (If you want to install Discourse for…

I have started to installing i got to this command ‘bundle exec rake autospec’
taking long time ready 20 mins since this command given is that normal ?

Ok after 29 mins i got this screen and not doing anything else , what shall i do next thanks. 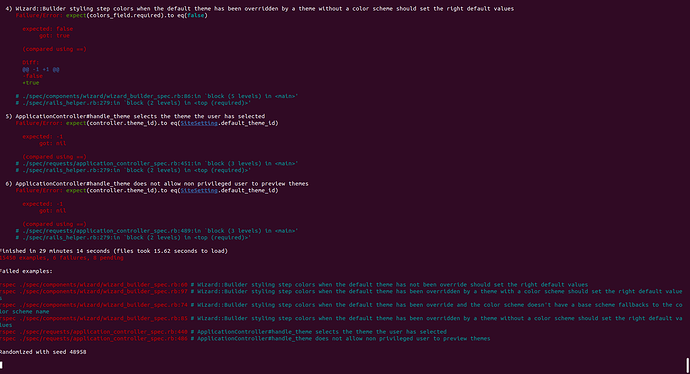 This is not mandatory, it’s just running the unit test bundled with Discourse.

Ok after 29 mins i got this screen and not doing anything else , what shall i do next thanks.

Looks like a few tests failed in your case, I would not be too concerned.

Move on and run the server.

Very strange when i started the local server this what said

then i have give that command then i get this error

Very strange when i started the local server this what said

Not strange at all, this is a super modern feature. You need to run back-end server and ember front end server simultaneously in this mode.

then i have give that command then i get this error

Looks like you need to update node to a more modern version.

Thanks All up and running now