So… all the staff have roman statue avatars. I like the idea… It sets the staff apart much more than just using flair. Did you use an app for this? Was this just an idea that just popped up or was there any discussion/brainstorming around the decision?

It was an idea that was surfaced while discussing how to get everyone’s images onto our staff list page. As a fully-distributed company, getting consistent headshots is… tricky, so we went with stylised busts of everyone. We hired an illustrator to draw the pictures based on selfies. We’re all using them as avatars on meta temporarily just to show them off; most people will probably switch away at the end of the year.

Yes we will definitely switch back Jan 1st, this is just a special celebratory thing at the end of 2017 to demark passing the 20-person mark at the company!

Just to commemerate for the future, here’s a screenshot of how it was 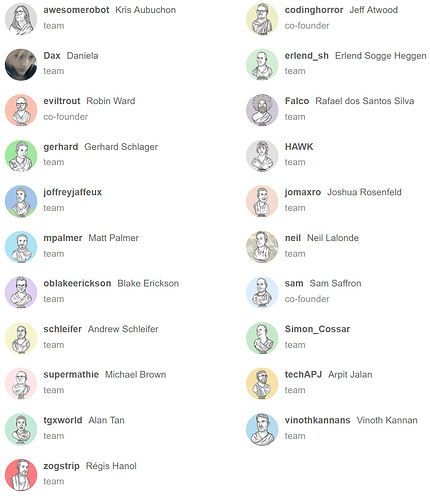 Also, FTR, @Dax has been hired very recently and the artist hasn’t had the time to draw her picture yet.

Does Dax get to choose of she wears a Toga or a Stola?