At the moment I’m getting message
"no response from daemon: shim error; docker.runc not installed on system".
I tried a possible solution for that to no avail

Earlier today I installed telnet (which I guess updated yum?) to troubleshoot an email issue. Right now, I’m kinda hosed. I’m on Centos 7 I believe. Initially docker would not start, stated a problem with the network bridge. Removed and installed docker from yum to get that working again.

Here’s my docker.info at present: 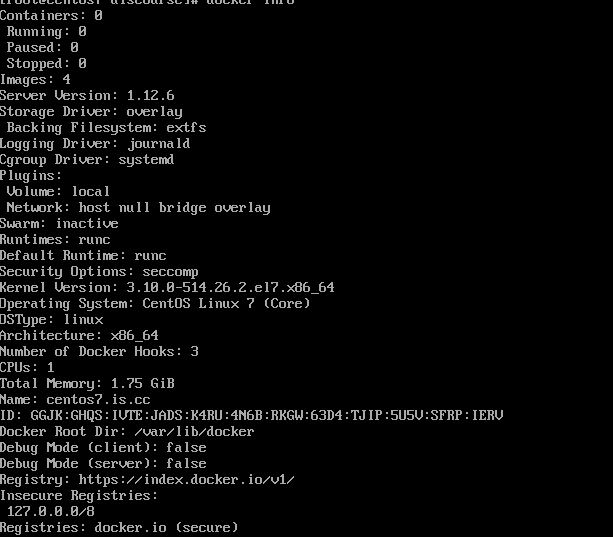 Containers = 0 kinda concerns me, although I did make a backup of my docker directory before messing around. I did run docker rm app at one point (After the error about docker-runc occured)… maybe not such a good idea.

Attempt to rebuild results in same error message regarding docker-runc

Thanks Rafael, I don’t fully understand but will follow the instructions for installing Docker CE

Ok I’ve installed Docker-CE from Yun (After fully removing docker components per the guide you linked).
Docker fails to start

Doing some digging to see what might cause this.

Ugh, I can’t figure out why docker-CE won’t start on this server. It installed without issue.
I even deleted /var/lib/docker reinstalled docker, no change.

For some reason, Docker doesn’t seem to play well with CentOS. Most of us here use Ubuntu, so don’t have solutions off the top of our heads. If you’re stuck and just want someone to fix it, I’ll figure out something. You can place an order here: Fix Your Broken Site – Literate Computing, LLC . I’ll just fix what you’ve got rather than re-installing the OS as described there, though if you’d be willing to switch to Ubuntu, I could switch you over for the same price if Discourse is all that’s running there.

For some reason, Docker doesn’t seem to play well with CentOS

That’s what I’m finding. I think my host (Interserver) might have only offered Centos at the time so I went with it. They have ubuntu now, spinning an ubuntu box here as I type.

As long as you’ve got a recent backup, you should be good to go. Actually, you could even just rsync /var/discourse to the new server and rebuild.

I have back up from yesterday on S3. But rsync would probably be better so I have all the content until things went south.

If systemd says “disabled”, you have multiple options

Let’s do this in a CentOS Vagrant VM (actually, it is icinga-vagrant/icinga2x with a stopped httpd)

This also works for me with setenforce 1 as the Docker package installs an SELinux policy.

So this somehow seems to be related to the missing enable/start step on CentOS. No need for a migration run to Ubuntu imho.

Thanks. So removed an installed docker-ce again per the guide above, ran “systemctl enable docker.service” but it still fails to start when I try to start it from systemctrl

I’m getting a little more information this time under journalctrl… "Failed at step EXEC spawning usr/bin/docker-current: no such file or directory.

I’d appreciate copy pasted logs, so everyone can copy them into Google too. Screenshots are really hard to re-type.

Please run docker -v to show the current version. To me it seems you still have the old system’s docker installed side-by-side (the linked setup docs tell you how to remove that beforehand).

I’d appreciate copy pasted logs, so everyone can copy them into Google too. Screenshots are really hard to re-type.

Hmmm. It seems that docker is actually a script which performs a lookup for possible paths. But only on RHEL/CentOS 7 where this comes from the RHEL repositories.

I don’t have /usr/bin/docker-current here.

Systemd starts dockerd here, you can see that from the service file in /lib/systemd/system/docker.service:

Do you have any other occurrences of a Systemd service file for docker, e.g. in /etc/systemd?

Anyhow, I’d suggest to start “fresh”. Purge anything which has docker in its name from the system

and go for installing it using this guide again.

This appears to be the key. I did go though and remove as many docker-xxx packages as I could think of earlier, and it made no difference.

This time, docker installed and started after I ran the find lines.
Discourse is updating it’s base now… We’ll she

I was (still am) pondering moving to ubuntu purely because my exisitng setup on centos seems to be very fragile. Anytime I try to update discourse, I end up with a broken container, or a docker that won’t start.

I was (still am) pondering moving to ubuntu purely because my exisitng setup on centos seems to be very fragile. Anytime I try to update discourse, I end up with a broken container, or a docker that won’t start.

If I’m reading this thread correctly, I’m pretty sure you’d have spent much less time if you’d moved to Ubuntu.

If I’m reading this thread correctly, I’m pretty sure you’d have spent much less time if you’d moved to Ubuntu

Although I would had to move all my data across and I’m not sure how involved that would be.

I was doing both really. Alternating between working on ubuntu and this centos install. Hit a snag with docker under ubuntu on the same hosting. Went through signup process with another host, docker and discourse was simple, but email with sendgrid is not co-operating for some reason

Thanks everyone for your help.

Some mail service I dealt with lately restricted access by IP so I had to provide the discourse server address to the mail service.

If I’m reading this thread correctly, I’m pretty sure you’d have spent much less time if you’d moved to Ubuntu.

I’m a friend of solving immediate issues, they give you some experience with debugging things, and also the obligatory “yes, I solved it” feeling.

I see that in the monitoring community a lot. Problem X is there, doesn’t work. Another user jumps in and suggests to replace it with project Y. Keeping a question with a discussion and a possible solution helps many others who find the topic years after with Google. I do see my knowledge input as investment into the future, not to answer that again and again.

Still, if many community members choose Ubuntu LTS, go for it. You are now in the first steps where such a decision can be made easily. At NETWAYS, we’re also going the Ubuntu route these days, and my Discourse instance runs on 14.04 at the moment. dist-upgrade to 16.04 is planned, 18.04 will be out this year too.

The good thing about the container image is that you don’t have to care about Ruby, gem, etc. version dependencies. In terms of security aspects in such an AIO package, I do have the feeling that the Discourse team acts responsible with announcing and forcing users to upgrade on possible CVEs and security bugs.

Some mail service I dealt with lately restricted access by IP so I had to provide the discourse server address to the mail service.

True, and sendgrid is one that offers this. I wasn’t seeing any requests hit sendgrid (It will show attempts from IPs not on the approved list in the dashboard), yet was able to telnet to the smtp server, so it wasn’t a firewall issue either.

In the end, started over with a separate account sendgrid account, a fresh API key and it’s happy now.