Our users are intermittently but frequently seeing “That post was edited by another user and your changes can no longer be saved.” when editing a post. After clicking OK and submitting again it goes through. Running 2.8.0.beta2.

Searching I see some changes related to concurrent editing a wiki post, but this is not a wiki, these are normal posts.

3 Likes
Edit Conflict: That post was edited by another user and your changes can no longer be saved
Slowhand (Slowhand) June 13, 2021, 5:46pm #2

I was just starting a thread about this myself. Our users are having the same issue while editing their own posts. They get a message about an “Edit Conflict”

I experienced this myself on a Wiki post. I started an initial post, then later edited it, and when I went in to edit it again, the second edit was gone. I also had the “Edit Conflict” at the bottom. (So far, I was the only one editing this particular post, so there was no user conflict)

This next screenshot is when I tried to enter a third article into a wiki post, but the second article had disappeared. 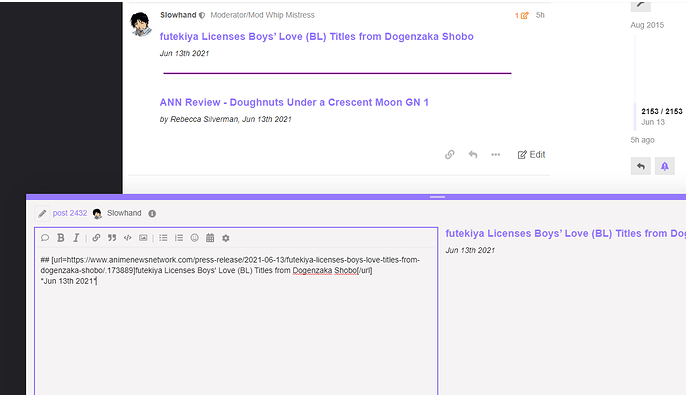 EDIT: users now telling me that they sometimes get an “overwrite” prompt, but if they click OK to that, all previous edits disappear

I believe this error message may trigger when another user is replying to your post and you try to edit it. If so, that should be considered a bug.

I was the only one in the thread when it happened to me. There was no one else replying or even looking at it.

Other users tell me this is happening in their Private Messages as well, if they try to go and edit their reponse.

Ahh. So much for that theory then!

Hello,
I believe this is happening when the system download content remotely or do some process in the background. It takes a few minutes and after then you can edit the post.

Thanks for the response, this was first reported to me on Wednesday, but it’s taken me until today to get some screenshots.
Will this be some sort of daily occurrence then?

My users can edit their posts immediately, they just need to click the “override edit” button and it works.

I don’t know what reason but after it finish you can check it by click on the right corner orange pencil. On our forum the reason is usually Download Images. For example it downloads gifs or when oneboxing a link and download the index photo…

Any idea what causes the previously edited parts of the posts to disappear?

Just to add, we now have several people editing the wiki posts and we’re losing articles. I guess I’m going to need to make some sort of announcement about this.

Is there some sort of timeline that lets us know when this will happen? Having to go and look at all these wiki posts to make sure something didn’t get deleted accidentally is going to be time-consuming.

It could be that my recent fixes introduced this problem. I’m investigating this.

This topic is a duplicate of Edit Conflict: That post was edited by another user and your changes can no longer be saved

Please track that topic for the solution.

This topic was automatically closed after 18 hours. New replies are no longer allowed.