Hi Robert, I’ve updated to the latest and rebuilt my server. Here are the logs I get on the 404 page:

What’s the URL in your browser? it should be:

Could you try that URL?

I’m wondering if your javascript cache is the issue here. Could you try and delete all local data from your browser and try the whole thing again?

When I paste that in, it redirects me to /u/username/follow/following instead.
Then when I go to Followers, the 404 page appears. It used to work perfectly before the past several days.

As for caching, I tried a different browser in incognito and it resulted the same.

When I paste that in, it redirects me to /u/username/follow/following instead.

That’s correct behaviour, apologies. Red herring (slightly). But it should change to /followers when you hit ‘followers’. Can you confirm that?

ie at the point you get the 404, what is in the address bar?

Interesting, I discovered another bug. On mobile, the network tab is broken - the right dropdown is blank and cant be tapped to filter Following or Followers, 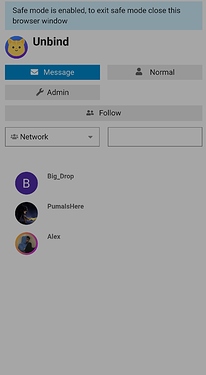 However, when the link is entered directly (site.com/u/follow/following) rather than going through the navigation, it works. 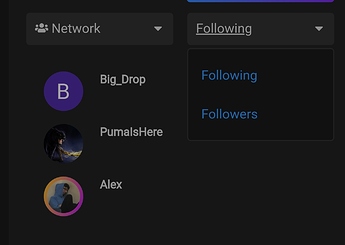 When you hover over the Followers link button, what URL do you see in the tooltip/status popup (on Firefox this is bottom left)?

OK at least that is correct … I’ll get back to this when I have some time to spare. Thanks for the info.

Thanks for the help Robert

Before knowing this Plugin existed, earlier today, I actually requested for a somewhat similar feature here.

Revisiting this old issue… I think this feature would make sense as an administrative tool, not as a site-wide feature. Some possible (non-social) use cases All of these are based on actual experiences I had. The unconfirmed spammer: [image] So I’ve seen this kind of spammer before, they do this one post, then a few days later come back and do a post with some SEO link. BUT I can’t be 100% sure this isn’t a legitimate user. So I would like to subscribe to his posts so I would be immediately n…

… but with a slightly different use case, very much based on admin experiences only.

I would like to see how Stealth mode looks, if it ever gets implemented, and I might even favor a “admin-only” option in this plugin, so that it would be only active for Moderators, and ordinary users would have no sign that it is installed.

For some sites, this “social” kind of “follow” just doesn’t make sense, but the feature can still make sense for other reasons.

favor a “admin-only” option in this plugin, so that it would be only active for Moderators, and ordinary users would have no sign that it is installed

Hey Robert! Any update on this? Thanks

Not yet but should have an update by end of week I hope.

Alex, the second bug should now be fixed:

Unfortunately this was hard to track down as was ‘silently’ failing.

As for your first issue, which looks individual to you, I’ll add some error trapping so we can investigate further, I will PM.

Thank you Robert, I appreciate your help a lot!

We’d love this too! Was this ever built?

Hi @angus! Awesome Plugin! Was wondering if there is a way to not have Babble chat trigger Follow notifications?

image766×200 15.2 KB
How can i disable that but still recieve notifications if the reply to me, mention me, quote me or link my post to a topic?

How can i disable that but still receive notifications if the reply to me, mention me, quote me or link my post to a topic?

That’s the default behavior. You don’t need to follow them or use the plugin for that to happen.