I was Installing the Discourse Dependencies and packages to my system, but I didn’t know that this will require about 7gigs of my hdd. I’m not sure if the installation is successful because in the process I was getting messages about that my computer is running out of space.

My computer has only 1gig free now and I’m not sure If I can continue with the installation locally.

How can I proceed with this installation? 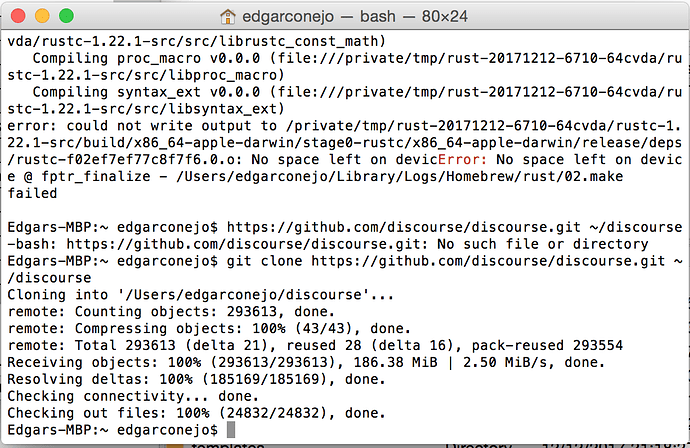 My recommendation would be to use our docker dev based setup from here onwards.

Does that work for you?

A post was split to a new topic: I had issues with docker dev in the past

Hi Edgar, have you had any luck here? Is anything blocking you?

Hi Sam, yeah my computer is blocking me to continue, I’m running Yosemite 10.10.5 and Docker doesn’t support that version anymore. I will make the upgrade of my OS later today and I will let you know if I have any problems. Thank you!

Hello, I’m having problems to install the Bootstrap Discourse, none of the gems (source ~/.bashrc and bundle install) seems to work, what I’m doing wrong? Attached screenshot of where I’m stuck, thank you! 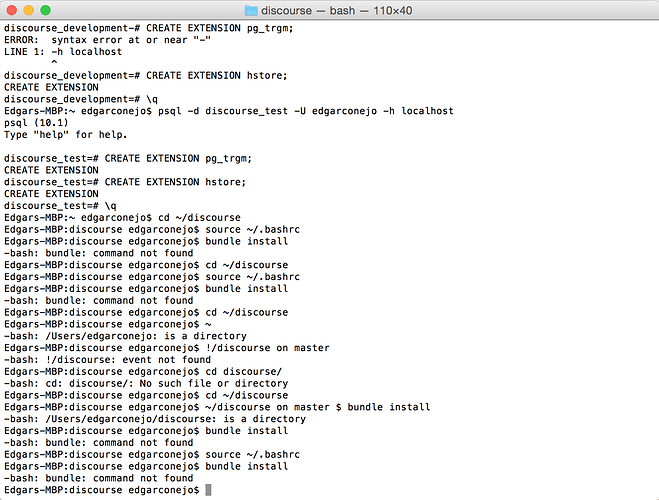 Is this what you did?

Hi Jay, I’m not using Docker to install Discourse for Development, I’m using Terminal and I’m not really sure about what you just mentioned. I’m following the steps and when installing the Bootstrap Discourse doesn’t look that is doing anything, please see screenshot. Thank you 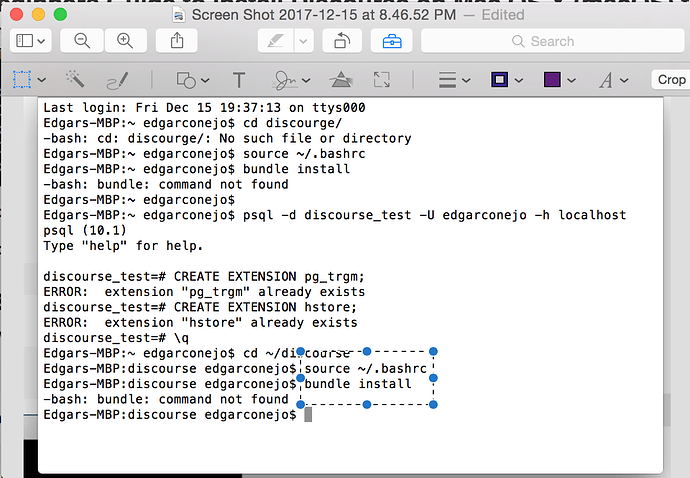 I strongly recommend docker, cause it becomes as simple as running a single command

As @sam said, if you just type the commands that I showed you above, you’ll be all set.

Also, do you see where you typed “cd discourge” and not “cd discourse” and you didn’t notice that you typed it wrong and just kept going? If you are not paying enough attention to notice that, or don’t understand what “No such file or directory” means, then you really don’t have much of a chance.

Why do you want a development environment?

@pfaffman he needs a dev setup as a designer so he can contribute css changes to core, it is an edge case but not a huge one imo

Seems like a great use for Docker development to me!

Not to me, though. “You must be a full blown dev to build a simple CSS theme” is madness, in my book

But I guess it is what it is… this is a project of sheer cliff-face wall barriers to new contributors and has been for a long time. I guess the good news is that people who don’t freeze to death on Kilimanjaro go on to become amazing mountain climbers?

Installing discourse with docker dev is a 15 minute job, I do not think it is fair to call this mountain climbing

Depends on your perspective. If all you know is basic HTML and CSS it is a huge mountain.

Also, if you want someone to do something, urging them to do it, walking them through the steps, pointing them to how-to guides is fruitless. What you should be asking yourself is why aren’t they already doing what I want them to?

And that’s a much more interesting conversation about barriers to entry.

The specific instructions are:

That is it, all done. The big barrier here is that @EdgarC had low disk space followed by running an old version of Mac OS (Docker supports El Capitan which was released at September 30, 2015)

I completely concede that if you insist on being able to do this on old Macs it can be fairly tricky, but Windows 10 or, less than 2 year old mac it should be fairly straight forward.

On Windows PC’s (I don’t know about Macs), you have to turn on virtualization in the BIOS.

On Windows are able to have a single script you can run to get it going on WSL, I know @vinothkannans was interested on showing this off.

This could be down to

hey @notriddle, are you using Windows 10? then you don’t have to worry about virtualization anymore. Discourse development in Windows is very simple now.

Beginners Guide to Install Discourse on Windows 10 for Development

I did not continue using Docker because they do not support my current iOS version and as per Sam’s advice, it’s better for me to have Discourse installed locally.

I still have problems on the Bootstrap step, what could it be? 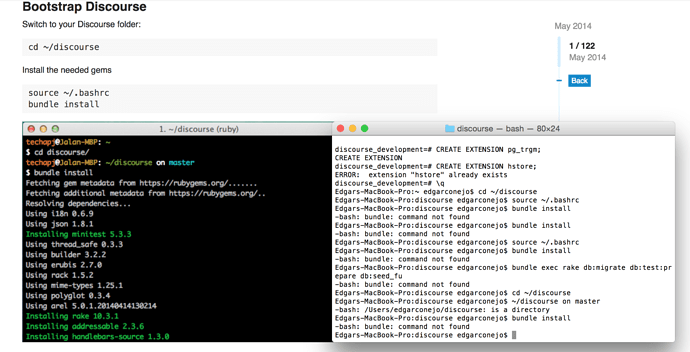