Help: Kcptun on server and No Space for Discourse now

I’m from China, and as the VPN was stoped by the government. So I build up the shadowsocks and Kcptun service on my server to help me surf the blocked websited.

But a few months passed I found my server space all occupied, don’t know why.

I tried to clean up enough space for my Discourse, but found it quite hard.

Can any one help me?

What’s inside /var/discourse/shared? You stopped the story half way through! 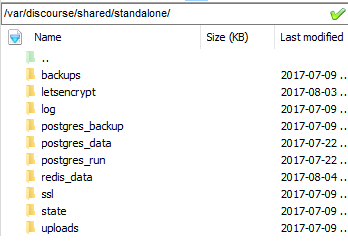 Well, I don’t think there being sth wrong with the folder /shared, I think it must be cache or other files which was caused by Kcptun. You can see the docker images, and the images are not very big.

While at the same time, I don’t quite know how to clear the system disk. Could you please give me some advice?

Hi, I found it so big in the backup folder

What are these backup packages? Why are the owners belong to kcptun, does that mean I can delete one or two of them?

Those look like uncompressed versions of the regular backup. The “owner” can be misleading on files things that are viewable inside and outside of the docker image. The system just looks up the name associated userid for the files. The user name will be different inside the docker image and outside.

You should delete all of them. If the compression step fails due to disk space, the uncompressed file remains. It’s a bug that I reported in the past couple weeks.

You probably want not to include attachments in the backups, which makes backups smaller.