A minor UI issue that is slightly bothering…

Anonymous users automatically show up in the “Pending Users” queue after being created, like so:

Is there a way to make it so anons don’t appear here? There’s no reason to approve anons and their accounts already work. It just seems excessive and untidy.

Yes this is an edge condition with anon accounts when new account approval is enabled @sam we should fix.

Is there some sort of hacky way I can fix this for now?

Reviving this old topic to indicate I’m having the same issue with (near) latest (v1.7.0.beta7 +27) on an invite-only forum with anonymous posting enabled.

When a registered and approved user creates a post in anonymous mode :

Yeah we have never tested that, but conceptually approval should flow through. If your master account is approved the anon shadow should be as well. 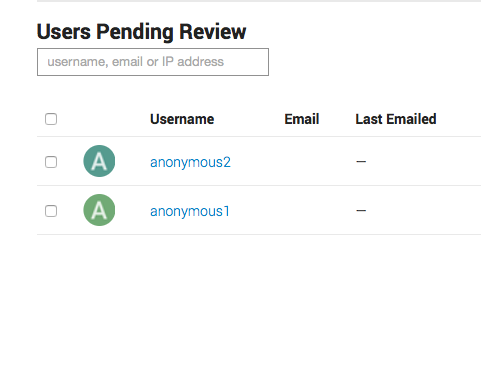 This seems to still be an issue.
Anonymous users are showing up in the review queue for me.
But as Alex says, the posts are showing up as if they are approved users, so it’s mostly a cosmetic issue for now.

Don’t know if it’s related, but I think it might be:

We’re getting emails saying that there are 0 users waiting for approval. When we go to the queue, the anonymous users are there.

I really think this is a #bug and not a “feature, pr-welcome”