I would like to ask is it good to run a small Discourse instance on ArubaCloud’s Small VPS? Their features:

Try it and let us know!

Hello there, that pretty much means I should give a try?

Sure, but also I would like to ask, by following features I gave. Will Discourse run flawlessly (if small instance, 2-3 posts/day & ~100 users.). Thanks.

That’s what I meant by “Looks good.” It looks pretty close to the minimum recommended Digital Ocean droplet: 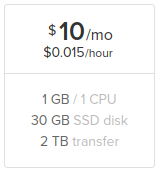 So 10GB less won’t do too much difference, I hope.

It’s a little tight, but for a small forum shouldn’t be a problem. You may need to

more often, but it should be fine.

Ok, thanks for the help.
P.S: if not bothering what actually cleanup does? Deletes old topics? Or clears half of the community? Everything? Thanks.

Ok thanks for the help, perfect!

I’ve opened an account to test it. Any recommendation? Anything particular to test?
I’ve installed latest version of docker without any issue at the moment.

Hey, that’s awesome. Can you please give a link to your instance. And create like 2 topics with like 2 sentences on each topic. Thanks!

Been running Aruba for some time and it works great, from technical perspective. Search for “aruba” here to find some details.

Note that they have swap partition by default.

That’s awesome! If not a problem, can you provide a link to your community?

I tried a small instance on Azure, similar CPU and RAM. Discourse’s setup didn’t like less than 2GB of RAM and went ahead to create a swap file. It didn’t happen when I tried the next size up which has 2CPU and 2GB.

I can say Discourse runs like a speed demon on 2 CPU and 2 GB RAM on my small, light forum similar to yours. The smaller size VM should not give you a problem except maybe during installation.

Also using 2 CPU when rebuilding Discourse just takes forever… Like 15-20min or more. So if you are just playing around and trying out plugins, I suggest you go with a fast CPU setup. More expensive yea, but you’re likely to use it only for a week or two to get the setup down.

Then just downsize it back to small. Remember, everytime you change plugins, it is a rebuild. The waiting can be frustrating.