I wanted to do a post (that I try to keep up to date) with notes about my current dev environment.

This was a setup I WAS using, I no longer really use it I develop on Linux native. This setup though is reasonable if you are on a Windows machine.

A desktop shortcut to my linux VM

I use this shortcut to access my VM - target:

It adds a bit of

in that I have nice padding on my terminal and connect my mobax windows manager to the session so I can run stuff like git gui if I want.

A shortcut to puma

I use a custom shortcut to launch puma:

This shortcut is pinned to my taskbar and allows me to easily launch puma when needed and easily find it. 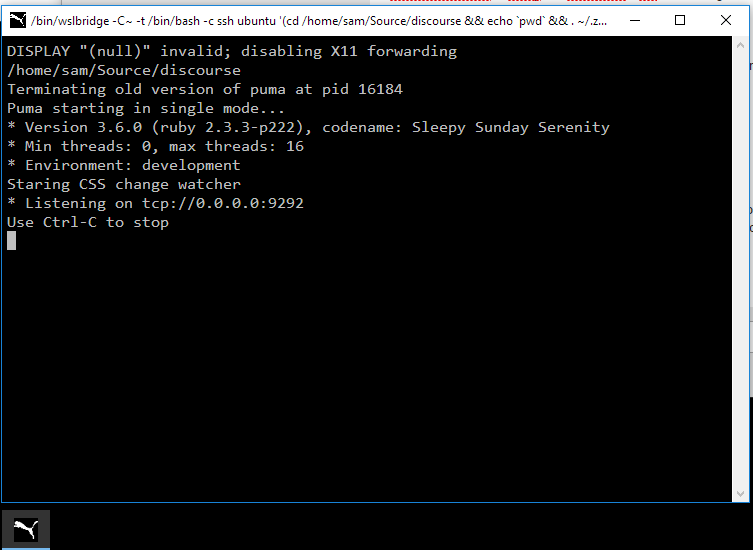 I prefer running Chrome in Windows to running it in X Windows, I prefer the rendering Windows provides and it just works a bit faster in this setup.

I have it configured so ubuntu always resolves to my VM ip, I handle that by providing VMWare a static lease for the VM per this article.

It basically means I edit:

Once that is done and my c:\Windows\System32\Drivers\etc\hosts file is edited to reflect, I can access my dev env using ubuntu instead of shuffling IPs. The IP is stable on reboot so this just works once setup. 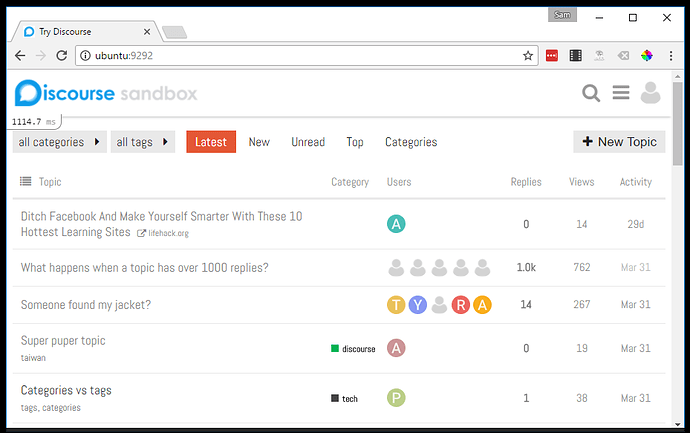 Seamless SSH from WSL to VM

I generated an RSA key in my WSL instance and use ssh-copy-id to stage the public key to the Linux VM.

This means I do not enter passwords when I ssh into the VM using the above shortcuts, this is critical to this workflow.

Better errors is the awesome gem that makes debugging in dev so much easier. Unfortunately, out of the box, it is super strict about who is allowed access.

to allow my Windows machine access to http://ubuntu:9292/__better_errors by adding this to my .zshrc:

Feel free to use less of a sledgehammer, but completely losing out on better errors would be a huge shame.

This means that as soon as I save a spec, autospec runs it using the power of

Thanks, @sam. Does anyone run a native Ubuntu dev environment? (Or maybe it’s so easy that it’s not worth documenting.)

@techAPJ does and @tgxworld but it is far less fiddly.

So you want to set up Discourse on Ubuntu to hack on and develop with? We’ll assume that you don’t have Ruby/Rails/Postgre/Redis installed on your Ubuntu system. Let’s begin! Although this guide assumes that you are using Ubuntu, but the set-up instructions will work fine for any Debian based distribution. (If you want to install Discourse for production use, see our install guide) Install Discourse Dependencies As regular user run this script in terminal, to setup Rails development environ…

I notice that your dev environment has the content of try. Is that something mere mortals can get, for starting out with a pre-populated test space?

I would love to have a test database out there that anyone could download, unfortunately try would need a bit of scrubbing (emails / ips) if you feel like taking on such a project let me know

If @elijah does not want to take on the project, I’d be happy to once I finish my current project.

Yeah, I think I could do that.

Any progress on this?

I’ve got code that reads the database dump and creates a new dump.sql with almost entirely new content, and generates a whole set new placeholder images.

But the restore didn’t like my dump.sql and I need to track down where I screwed it up.

In the restore progress window in the browser everything leading up to that looks like:

Which is making me think, not a syntax error. That’s the first CREATE TABLE statement in the file. I understand that during restores there’s supposed to be some CREATE SCHEMA / RENAME SCHEMA magic that goes on (eg Manually restoring a Discourse backup for development ), but I don’t see that in the Docker log, the less verbose on screen restore log, or inside the dump.sql file.

I thought that might be the problem, so I manually put in

Is this process sound? It’s how I set things up:

And then restore them between runs:

Then I have to go into the web browser and create my admin account, enable restores, and try to restore the backup.

But that should reset everything past initial docker install, right?

This looks backwards to me, are you restoring older over newer?

Yes. Is taking a backup from an old system and putting it on a newer one not supported?

No that is not supported.

Uh no, that’s migrating forward. It’s taking a backup from current and restoring it onto old that’s bad.

Is this the recommended setup for windows?

Also, are you able to debug in the VM? Set breakpoints and such?

Recommended is a funny word

This is the setup I still use and still love. I have a Win 10 desktop with 3 4k monitors and while coding I dedicate 2 to my VM.

I find Vim + i3wm to be a killer excellent combo. Debugging wise I am a puts debugger. Combined with bin/rake autospec which works on plugins and has Vim integration where I auto focus on the running spec, I have a lethal and highly effective combo.

I would not say my setup is for everyone though, but … if you go down this path a lot of gold awaits at the end of the rainbow.