I forked GitHub - waynegraham/discourse-import-bbpress: bbPress importer for Discourse which offered support for only bbPress as a standalone. The bbPress standalone has been deprecated for some time now so Wayne’s plugin couldn’t help me. My updated version works with bbPress installed as a plugin for Wordpress.

You can find my plugin here: GitHub - dkobia/discourse-import-bbpress-plugin: bbPress (plugin) importer for Discourse

Wow, I don’t follow support much so I completely missed this. You should ask to have this moved to the Plugins category.

Thank you so much! This is absolutely critical for my community to move over to Discourse.

Also, you should get in touch with @michaeld, because:

I never spotted this one either. Going to play around with it!

@dkobia: Great plugin - it has probably saved me a ton of time. However, I’m having some issues.

I have the database with the old forum posts on my localhost. Using the plugin I’ve got all the content into discourse, running locally. So my next thought was to use the backup function in the admin panel to transfer the content from localhost to my digitalocean docker production server. However, when I try to restore a backup I get lots of different errors (“hstore not found”, “TABLE already exists etc.”).

Have you or anyone else tested if a bbpress converted database can be successfully backed up?

As an alternative, I tried just exporting the entire database using pgAdmin, and then importing it using pg_restore on the command line in the docker app. Which seems to work, but the app just shows an empty white page afterwards. So something is very broken, but I can’t quite figure out what. Frustrating.

Any tips are appreciated

Are your forums on the exact same version?

@michaeld: The local and production forums might be off by 0.0.1 or so.

However, I’ve tried creating a backup locally and then importing the same backup locally in the very same forum, which fails with the same errors I mentioned - so even that doesn’t work.

I have just installed discourse using docker (impressed!), and I have an old BBpress forum that I would like to try to import.

I am very new to this, and reading through the instructions here: 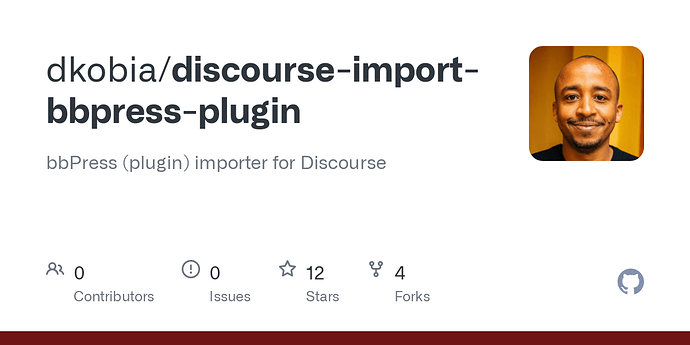 bbPress (plugin) importer for Discourse. Contribute to dkobia/discourse-import-bbpress-plugin development by creating an account on GitHub.

I have a simple question - how should I ‘Head over to the discourse directory’ given that it is running in a docker container? SSH?

How do I then run ‘rake import:bbpress’?

Sorry for basic questions, this is my first experience of both Discourse and Docker.

Okay, sorry for the n00b question above.

Migrating to Discourse from another Forum software developers

This guide serves as a high level overview of the migration process. For specifics on the wide range of forum softwares to import, including Vanilla, phpBB3, SMF2, bbPress, and vBulletin, review our dedicated tutorials. Not all scripts have tutorials, but an exhaustive list of available imports is available under the script/import_scripts folder on GitHub. So you want to migrate your existing forum to Discourse? That’s great! Let’s get started! 1. Set Up a Development Environment W…

…and now I’m wondering how to go about running the BBPress script.

"After reviewing and modifying, to run the bbPress import script you will do:

In my case this will be from inside the Docker container. If I can get it to run, am I correct in thinking that the database lives outside the container and that any content I manage to import will persist if I destry and rebuild the container?

Also, can I run mailcatcher from inside the container? I would like to avoid spamming my users as I tinker with the import process.

Any hints or tips gratefully received! Anybody looking for some paid consulting work?

Does it work with bbpress as wordpress plugin?

I would really like to hear some success, and even better, horror stories about bbpress import as I might have to take up this task at some point and am curious to see what sort of trouble people have bumped into.

I posted on how to import bbpress into discourse