Is Discourse allowed to use apple emojis?

I was on the Cloudflare discourse page and I noticed that there was an Apple emoji. I’m on Windows 11 so I was a little bit shocked. Turns out it’s actually an official discourse delivered asset that’s even in their official GitHub repo.

So, does anyone know if this is legally allowed? Or does discourse have a license? I thought I read somewhere that they need a license. I’m only curious because I’m working on a personal project, and I think it’d be cool if I used the (images) of Apple emojis. I would’ve asked as an issue in the repo, but there wasn’t a place to ask.

If discourse DID have to get a license, is anyone still allowed to use the images that discourse uses, or do we have to get our own separate license for a separate thing we want to use them for?

I was curious anyway and did some fast googling. Interesting, because seems like nobody knows and Apple has reacted sometimes and sometimes not.

Quite many sources are mixing copyrigh and licenses, those are two different thigs. But I couldn’t find what is policy of Apple (that wasn’t too big suprise, quite normal situation).

But I did find this from The Verge, but is like 4 years old and doesn’t answer either. 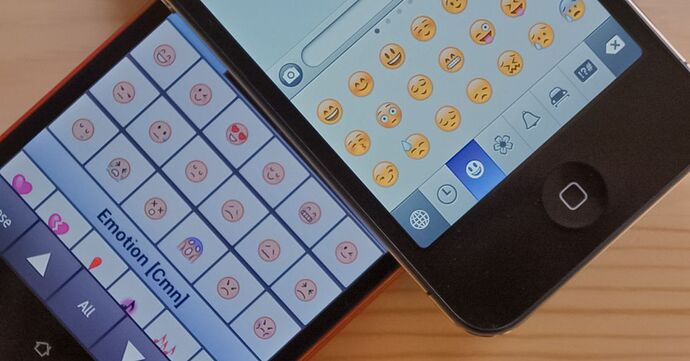 WhatsApp and Slack have changed their emoji already

Well, quite soon big guys here will answer to you.

I did come across this page Legal - Contact Us - Apple. I’ll send them an email for some clarification and post an update if I get a response.

It is not difficult to understand.
“Apps are NO LONGER ALLOWED TO USE APPLE EMOJI in non-keyboard based situations. Means if your app displays apple emoji anywhere without a user having it typed in, it’s illegal.”

So … basically it is not illegal when they are published by users in posts (whether they are topics, replies/comments or personal messages) or even in the chat. The problem could be in reactions. Since the keyboard is not used to enter them, only selected. I don’t remember, though, if apple emojis are used with reactions.

EDIT:
Anyway i’m using the iphone and when i put the “smiley” emoji, with the composer … it’s not the apple emoji. The Apple emoji is the one I publish with the Apple keyboard. So what’s the problem here? We just have to see if reactions plugin use the Apple emoji but i really think is the same of the composer, so i don’t think why should be a problem.