Is it possible to add older versions of Google Emoji?

Some of my users are complaining about the new Android 7.0 emoji

mostly because we have made some… customizations to some of them so the customized 6.0.1 emoji are no longer uniform with 7.0.

I know there must be bigger things in life, surely, however this is currently the only issue I have on my plate and would like to at least look into it.

I could probably include 6.0.1 emoji from an older version of discourse, what would be the most reasonable way to get around to it?

i worked around this by importing only the most important ones and renaming them which ended up being quite hilarious already by itself.

Yeah, your only option would be to upload custom emojis with the same names.

I feel you my friend, Android emoji are my favorite too, and some redesign on the 7 version made me sad

Sorry to revive such an old and silly topic, but I’m furious.

I read that Google is about to get rid of the ingenious and masterfully crafted blob emoji and replacing them with an inferior, cluttered and less expressive set, far too reminiscent of the similar, badly scaling mess used by Apple or MS.

While this is a matter of taste, I truly believe that they are giving up on what I found to be least invasive and distracting set of emoji currently used, and can only hope the replacing emoji is even half decent.

However, if/when it turns out that the new set scales down to 12, not to mention 10 points just as badly as competition, I would really appreciate the possibility to somehow easily remedy the situation.

I would be perfectly OK even with reverting the core set of emoji (preferably from 6.0, although I’m bit of a fence walker when it comes to poop and sunglasses

) with the new set simply bringing in only totally new emoji that didn’t exist before.

As I said earlier, since this is probably one of the least of Discourse team’s concerns, probably the easiest way to work around this for an Admin would be to have a library of png’s named by their reserved word, such as european_post_office.png and dragging & dropping them in the custom emoji upload tool, what I believe is ten at a time?

I tried to poke around the repo to figure out where the files reside but they are apparently pulled from somewhere else during build?

edit: In addition I just came to think that blobs would probably work great in monochrome so a bit of imagemagickery would likely produce great results…

Yes we could probably do this:

We could also fallback to the new set automatically if a new emoji is not available for android-old.

Adding a note about it in the emoji work post.

appreciated, but I wouldn’t go that far

and can only hope the replacing emoji is even half decent.

“Only hope” is right imo - the replacements are a return back to gradient hell.

I know this is already seriously off-topic but…

and can only hope the replacing emoji is even half decent.

“Only hope” is right imo - the replacements are a return back to gradient hell.

Updated with latest version, and while some of the new ones are tolerable in comparison to Windows or Apple emoji, I must admit I can’t wait to be able to get rid of them.

They are somehow really creepy and the ones you would expect to see most use are actually the most terrifying.

Some of those are so hectic and exaggerated they feel like a piss-take on emoji in general, such as rotfl, and the regular smiley is exactly the smirk HAL9000 would have on it’s face all the time.

While I admit having fallen from the graphic design wagon quite some time ago, I’m seriously having trouble understanding rationale, technological or social, behind, for example gratuitous use of gradients, but my guess is that this has something to do with the fact that people use larger fonts nowadays due to mobile and therefore emoji have less reason to scale down sensibly?

For our forum I have combined some emoji (such as dizzy and thinking, turtle and thinking etc…) and while working on them I really struggled with the amount of work required to fit everything in without ending up with a total mess, and this was with the old, simple blobs, so I do appreaciate the effort their team has put on these new ones, but to what end?

They are somehow really creepy and the ones you would expect to see most use are actually the most terrifying.

Have… have … have you looked at your own avatar recently?

You should now be able to choose “Google Blob” (and Facebook Messenger) in your admin settings: 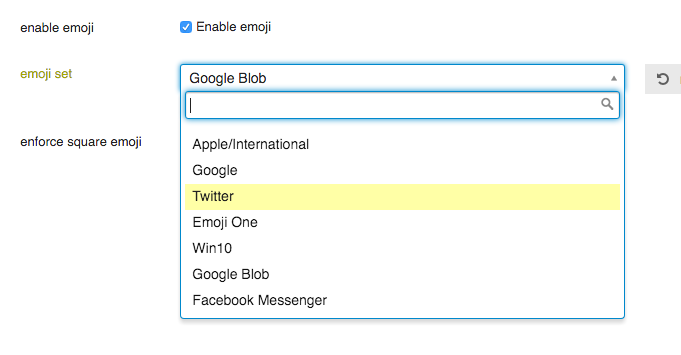 Please let me know how it goes if you try it.

This is not a great name, I suggest Google Classic please.

Will be done in https://github.com/discourse/discourse/pull/4957

If you were already using “Google Blob” you might have to rebuild html of posts: rake posts:rebake

Thank you very much, you can’t believe how relieved me and my users are.

You are absolutely welcome