I just noted that a few admin/moderator actions are not audited.
As an example Lock/Unlock user to Trust Level isn’t, but probably should be.

While we’re on the subject…

Blocks by the system user don’t have any context: 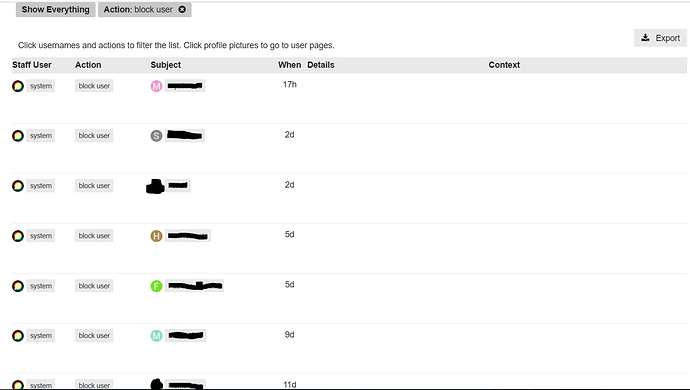 Delete post has no context (self-deleted in these cases): 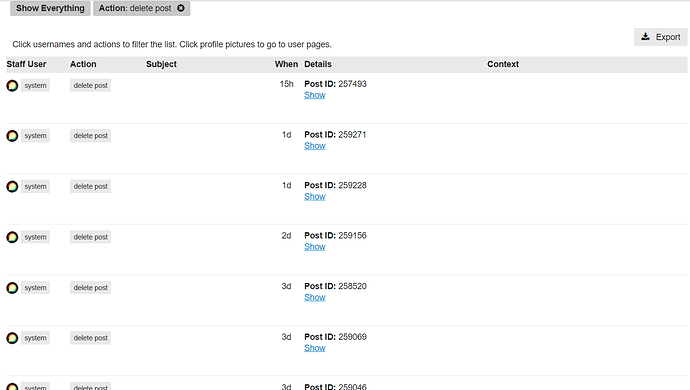 Adding context should be a priority, @neil can you add to your list.

Yeah we should definitely try to include context whenever we add something in those logs. Added to my list.

I handled all the things mentioned in this topic.

Blocks by the system user don’t have any context:

Were you able to handle this too?

Yes the context will include something like “blocked by staff” and “too many flags”, from the reason for the block.

While we’re at it, I’ll take the liberty of bumping this:

I’ve heard from multiple customers who were puzzled by how the system user was quietly taking action on certain posts and users. What’s usually happening here is that our friendly anti-spam measures are simply taking out the

But to anyone unbeknownst to this, automated deletions look scary because there’s really nothing to indicate that this is intended behaviour. We can do a better job of clueing the user in to what’s happening by briefly explaining why @system took action by putting…

Can you confirm we are good here @neil and @erlend_sh?

I’m still seeing some system deletions with empty descriptions, which is quite confusing:

Those look like email staged users to me, so system is perhaps cleaning up old staged users, can you confirm @zogstrip?