What I’d love to see is facebook-like inline translation of posts, so users can choose their locale (ideally at signup) and then translate in line when they see something in another language that they want translated.

Something like this was built but doesn’t seem to be working/active.

Seems we have some very similar ideas on this, especially after the advent of tags. I wrote this in a separate topic but I might as well close that and repost it here for continuity.

Continuing the discussion from Early preview of the new tagging plugin:

I just had a thought. What if a (special) tag could be set as a site-wide filter, invisible as anything other than a setting. The setting being your standard language selection menu in a corner somewhere: 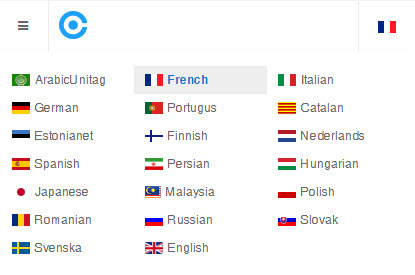 Imagine a website with two languages: English and French.

The site’s default language is English. As a result, by default, all new topics are tagged lang:en, and you can only see topics tagged lang:en. This isn’t a tag you can find and select from the taglist yourself.

If you change the site language to French however, two things happen:

Note: This is dependent on tags being possible to use in conjunction with categories as an added filter as opposed to the one-or-the-other situation we have right now.

That’s it. No need to make new categories for each new language, e.g. like on forum.topeleven.com. (provided category names can be translated).

I think this could be a very powerful complement to the existing work that came out of the “Multiple languages on single discourse site” debate.

… the only other feasible solution I can imagine would be if Discourse made it possible for multisite instances to communicate with one another, i.e. very much like how StackExchange works.

What if all languages were together on the same page, but the user could expand and collapse posts based on their language tag? So if a user selected ‘German’ they would see full posts that were in German or had been translated to German. All other posts would be displayed as titles.

There could also be a tag for posts that are in need of translation.

It would be nice to have the option to create translations through different methods. Machine translation of Persian and Arabic doesn’t seem to be very good

This sounds really ideal to me. It would be perfect for us, and would allow the between-langs translation. Is there any way this would get built?

@erlend_sh
As someone who was involved in that earlier debate, I am really excited to see this level of UX sophistication being applied to this concept.
I love the idea of language tags to identify the language of the post, but I think the default behavior of such a site should be multi-lingual. All posts are displayed for all users by default, and users could choose to mute out posts of one language or another. But it wouldn’t make sense to mute out a langauge in my context (montreal) because people want to be able to converse in both languages interchangably.
The question of a translation feature - automatic or contributed - i think is separate but related. The best UX for post translation i’ve seen is Facebook’s: a small ‘see translation’ link underneath a post that displays an automatic translation when clicked. I don’t know if that would make sense for a multi-lingual Discourse.

I love the idea of language tags to identify the language of the post, but I think the default behavior of such a site should be multi-lingual.

Sure, show-all could be the default. The important thing is either set-up is easily doable with the approach I and @resplin have described.

The question of a translation feature - automatic or contributed - i think is separate but related.

Functionally speaking, translation is a very different type of functionality from what we’re discussing here, so I would strongly suggest starting a linked topic for any further discussion about such features.

@erlend_sh
I would gladly be a tester for your efforts.
Which of these features are ready for testing?
Do you have an active fork on this?

I totally agree with you. This seems to be already partially done in a plugin that is not working now, as I mentioned above. Seems to me that is where we should be putting our energy.

I would gladly be a tester for your efforts. Which of these features are ready for testing?Do you have an active fork on this?

I’m not a developer

And I’m not in dire need of a multi-language forum either, I just gave some thought to how one could go about accomplishing it.

@resplin seems to have been willing to put money and resources into it once upon a time, but he’s not active on the forum at the moment.

@resplin Are you still interested in making discourse more suitable for multi-language communities? would the following be a viable option for you?

Create groups for each supported language.
Create duplicates of each category for every language you want to support. And make them visible/writable only for members of the respective language.
Explain to your users that if they join any of these groups, they will be able to see the categories in the respective language.
Users can choose which languages they want to see (even multiple at the same time) by joining the respective language groups.
Enable “Allow user locale” in the settings to allow users choose the UI language they prefer (regardless of which groups they are in)

The only downside of this solution that I can see is that only the default language categories will be visible to people who are not logged in. In order to see the other ones, they have to log in and join the language group.

If the downside is a dealbreaker, check out this, which could apparently be done as a simple plugin:

This feature may be useful in other scenarios too, but my use case is a multi-lingual site. A key challenge of a multi-lingual forum is how to best configure it to allow the use of different languages while not spamming users with posts in languages they don’t understand. At present, I think the best solution is to use language groups and show categories for each language only to members of the respective language group. Like this: But there is a significant problem with this approach: all co…

@tophee did any of this ever go anywhere? I see multiple threads but I still can’t find Discourse best practice for this issue?

What exactly do you mean by “this”?

“this”=best practice recommendations, plugins, etc for multilingual forums. I really don’t like the option of running multiple forums, but I have/will have content in 3 languages w/ very little crossover in audiences. I saw several different topics related to suggestions/improvements to handle multilingual requirements, but none of the threads ever seemed to a) result in actual feature development or b) consensus best practices. I was just hoping I missed something.

I think the reason you don’t see that is that there are still very few multi-lingual forums and those that exist will chose whatever works best for them.

What about the solution I posted above?

Any specific features you have in mind?

If you want to encourage interaction between language communities, you might want to consider not creating the same category in different languages but have everyone use the same category and use the translator plugin. If you don’t want to push people to interact across languages, my proposed solution above seems to be the way to go.

A feature that may indeed be useful for several of these scenarios are translatable categories. It has been requested before.

Another unresolved challenge with multi-lingual forums (or even mono-lingual ones allowing users to change their locale) is the customization of the discobot as described in this topic: What exactly are the effects of "allow user locale" - #33 by tophee

It would be nice to have the categories by language and when you write a message, a flag of language or something like that would appear. The problem with the Translator+++ is that you have to register for paid services.

you have to register for paid services.

In Azure, the first 2 million characters every month are free. And when your forum has become so big that you need more than 2 million chracters and your users appreciate the translation service, I would hope that you can get the money from them.

Note that post are only translated upon request, which means that the 2 million characters are only consumed when someone clicks the translate button. And I believe the translation is then stored locally so every post only needs to be translated once per language.

I know but I need to register my credit card and this pulls me back.

I don’t think I registered my credit card. Are you sure you need to do that for the free tier?

Because the free tier doesn’t even allow you to go over 2 million and pay for it. You will just be cut off. So there is no need for a credit card at all.

This is a good idea though. @tgxworld is there any way to be able to eg see a list of all posts in Portuguese?