XSS is still one of the most common web vulnerability – if someone else can run scripts on your site, it is not your site anymore.

Discourse mitigates XSS attacks with CSP, by allowing scripts only from trusted sources to load and execute. Discourse’s default policy employs a strict URL whitelist, and only allows sources that Discourse needs.

Currently, Discourse ships a CSP Level 2 policy with the following directives by default:

The default policy will be expanded in future updates to include more directives.

How to Turn on CSP?

Flip the content_security_policy site setting, and viola, CSP is on!

However, since CSP will start blocking any non-whitelisted script sources immediately, I recommend the following steps to make sure that CSP is not blocking your site’s customizations:

It is very common to have inline JavaScripts in themes:

Even though Discourse’s default CSP does not permit them, inline JavaScripts in themes / components are automatically extracted into an external file, so there are no changes required!

Here is an example of refactoring the above code:

If your site’s customizations depend on third-party JavaScripts, you may either

Admins can extend their site’s CSP by defining additional script sources to be whitelisted in the content_security_policy_script_src site setting. They can whitelist scripts individually with the full source path, or if the source is trusted, cover all scripts under the base URL:

You can extend script-src with all valid source definitions, including hash-sources, and 'unsafe-inline' if you must.

If your plugin integrates or depends on third-party JavaScripts, you may extend the default CSP in plugin.rb with the extend_content_security_policy API.

3. In Themes and Components

And this is what it will look like in the UI:

I can no longer access my site due to a bad CSP setting, what should I do?

You will need SSH access to your site, and open the Rails console with:

This will reset your CSP setup back to default, and you should be able to get back to your site.

I added a note about this to our public security.md file

As of this commit, we’ve turned off CSP violations reports by default because the vast majority of the reported violations are false positives.

To illustrate this, here is a screenshot of logs from a site running Discourse with CSP enabled and reporting enabled (filtered using “CSP Violation”):

All of the reported violations are not related to the site’s code:

In other words, there’s a lot of noise in CSP violation reports, so it’s not useful to log them at all times. They might be helpful while you are configuring CSP, but the reporting should be off during the normal operation of a site.

If your site uses an advertising service (like Google Ad Manager, Adsense, etc.) you probably will have to use a very permissive policy:

In the screenshot above, the policy allows any script from a https: source and any inline script. (In the future, this might be replaced by the strict-dynamic keyword, but as of this writing, strict-dynamic isn’t supported by Safari or Edge.)

8 posts were split to a new topic: Protocol-less CDN URLs are problematic

Please note that Safari doesn’t understand some parts of CSP, and this is normal:

You can safely ignore the CSP errors in Safari, you’ll see those on all sites, it just means Safari doesn’t understand worker-src and report-sample .

I guess we need to wait for Safari to be updated?

I’m having trouble configuring, which recommendation? 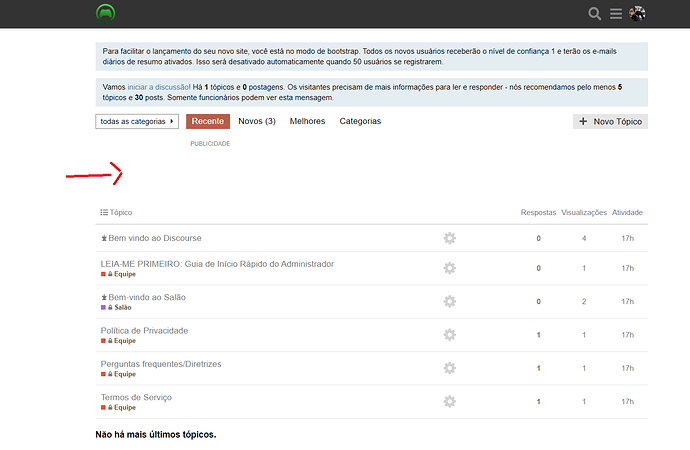 It depends on what URLs your ads are requesting. You can look at your browser’s console to see them.

See also the relevant section from the OP:

this solves the problem of the error

This is the one that I am using for more than a year now. (host nginx)

add_header Feature-Policy “geolocation ‘none’; midi ‘none’; notifications ‘self’; push ‘none’; sync-xhr ‘none’; microphone ‘none’; camera ‘none’; magnetometer ‘none’; gyroscope ‘none’; speaker ‘none’; vibrate ‘none’; fullscreen ‘none’; payment ‘none’;”;

Would it make sense to add the following to Content-Security-Policy header? This is what I am successfully using (added by host nginx, on top of discourse built-in CSP):

Given that the spec is still a draft, I don’t expect us to implement it at this time. The Mozilla website you listed even says:

The Feature-Policy header is still in an experimental state, and is subject to change at any time. Be wary of this when implementing Feature Policy on your website.

vibrate 'self' - likes on Android trigger a faint, brief vibration.

I just installed discourse 2.6.0.beta1 . Do i need to reconfigure this? Thank you

You do not, this is on by default. You only need to modify the config if you’re seeing external resources that are being blocked and you want them to run.

I use the following services in the forums:

Currently, I am using report CSP only while I try to resolve all open issues.

Here are my CSP settings: 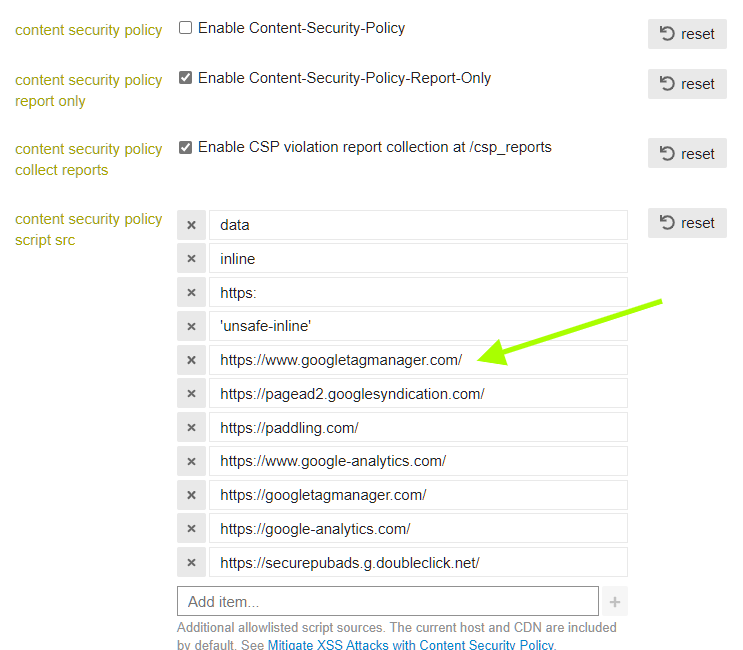 With the current settings, I am still receiving LOTS of CSP errors. Some seem like they can be ignored. However this one is boggling me as I have domain declared in the CSP settings.

There are lots and lots of false positives in CSP reporting. See my reply above for more details.

You don’t need most of the rules you have set in your screenshot, just https: and unsafe-inline are enough, they allow all scripts starting with https and all inline scripts. Try cleaning up your CSP sources setting and enabling CSP (without reporting), it should work.

Is it possible to add that directive somehow or should I just wait and not worry about it. Was just doing a hardening exercise and this was the only open item / recommendation by that online security tool. Gives me a lot of confidence in the platform actually, great job guys!

Is it possible to add that directive somehow or should I just wait and not worry about it.

IMO we won’t gain much from implementing frame-ancestors right now, unless we need to support whitelisting specific domains other than self.

I agree with this.

Chasing every possible vulnerability scanner “issue” can end up breaking things which are important, for a very little risk-benefit ratio.

There are a lot of “vulnerabilities in theory” which are rarely exploited or can only be exploited under a very specific scenario. These types of potential vulnerabilities have never been exploited on a Discourse site, to my knowledge; and I would advise against “fixing” things which are “in theory’” a vulnerability that have not resulted in a breach of any consequence.

That’s my 2 cents as a many decades long cybersecurity professional. I am happy to discuss the basics of cybersecurity risk management if anyone is interested.

We just landed support for CSP frame-ancestors directive. It’s disabled by default for now behind the content security policy frame ancestors site setting. You can add domains to the list using via /admin/customize/embedding as always.

This directive will be enabled by default in the next release cycle.