I’ve recently installed multisite on a 2GB RAM DO droplet with 6 sites. I think I should probably use a higher RAM option and yet since all forums will be really small for the start, was hoping I could start cheap.

Regardless, when I go to upgrade from the admin page of any of the forums, including the main/default forum, when I click on the blue upgrade button, the button turns to gray and says “Upgrading…” but then I don’t see anything appear in the black terminal box below, as I would normally see on my single-site installations. 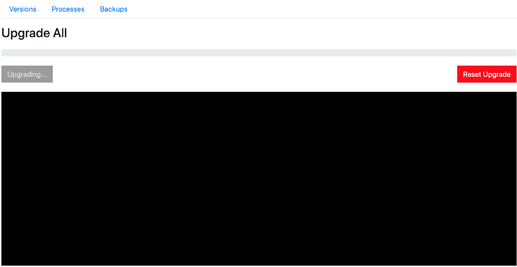 It has been at least 10-15 minutes now and I still don’t see anything and am unsure if it’s making any progress.

Edit: I reset the upgrade, waited a bit, refreshed the page, and tried to upgrade the Discourse Assign plugin and then info showed in the box that I didn’t have enough unicorn workers, I think from the previous upgrade. I clicked upgrade for that plugin and it worked, so I’m assuming the problem was that I just don’t have enough RAM, as per this How to avoid upstream timeouts? - #2 by mpalmer

You’ve said at least twice that you don’t have enough ram. I think you’re right. Have you considered increasing the amount I ram?

Ah, I know I’ve thought about not having enough RAM, but I’m pretty sure this was the first time that I posted about it—but maybe not.

After I found the problem here was the lack of memory, I thought about deleting the topic but thought maybe it’d be helpful to leave it up for people in case they encounter a similar bug.

While I had read about different RAM recommendations, ranging from:

I would not recommend that, no. I’d say 512mb ram minimum for each additional community.

I want to host hundreds of instances of Discourse

I don’t recommend going multisite with < 4GB of ram, but Multisite configuration with Docker .

I had not read much about the ramifications of not having enough RAM. I was seeing that the sites are slower but with this I saw that rebuilds/upgrades can fail because of not enough memory.

I was going to be OK with slower sites for now to save the $10/month, but failing upgrades annoy me enough, so I’ll bump up the memory.

If you leave the disk the same size you can scale it back down later (if ram isn’t the issue somehow).

Yeah that’s what I was planning to do. I noticed just upgrading the ram/CPU will give me the same price as upgrading with the larger disk as well, but would prefer the reversible ram/CPU option for now and if I find that it works or a higher level that works, then I may upgrade with the added disk space (if possible at the same price) or start a new droplet and recreate them there.

@pfaffman, I’m really grateful for your help, your words, and so much that you’ve done on Meta to make it easier for someone like me to install and manage—thank you.