My postgres isn't starting with my docker container

Caused by:
PG::ConnectionBad: connection to server on socket “/var/run/postgresql/.s.PGSQL.5432” failed: No such file or directory
Is the server running locally and accepting connections on that socket? 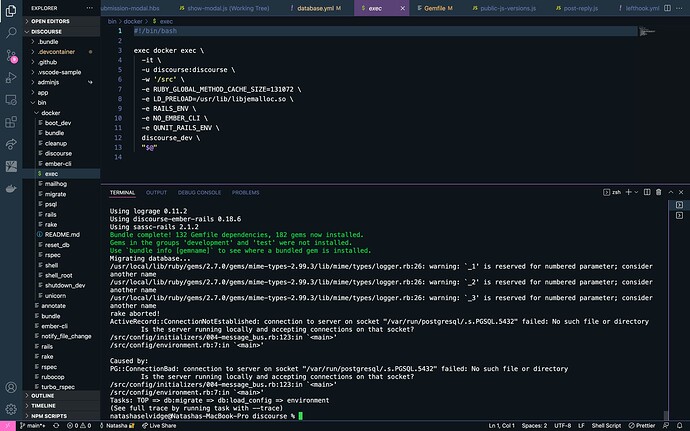 If you’re not following the standard install instructions then you’re mostly on your own, but I see a database.yml in one of your tabs, suggesting that the database is in a separate container, so you’ll want to crank that up first.

This is a development install right? Moving it to #dev.

Have you started the postgresql service on your OS?

/usr/local/lib/ruby/gems/2.7.0/gems/activerecord-6.1.4.1/lib/active_record/connection_adapters/postgresql_adapter.rb:83:in `rescue in new_client’: connection to server at “127.0.0.1”, port 5432 failed: Connection refused (ActiveRecord::ConnectionNotEstablished)
Is the server running on that host and accepting TCP/IP connections?

This is just my local install using docker, and it was working before

I guess I could try the standard install next.

No. If it’s development, you don’t want a standard install. I’m not sure what your issue is, though.