Name tagging with lots of matches

I was trying to tag a user known as Chris Cryne in a post. I typed @Chris and she wasn’t there so I assumed she wasn’t on Discourse. However, it turns out she is on there with her Sunday name of @Christine_Cryne.

Quick question - why didn’t she turn up in the drop down list when I typed @Chris. When I’ve just typed that here, it found a @Christopher. Is it because the number of entries on the drop down list is limited and we have loads of people whose name starts with Chris?

If so, is the number of items on the drop down list configuration (in which case I’ll raise a ticket). Even if it configurable, CAMRA has 180,000 members. Sure, they’re not all on Discourse but over time that drop down list could get rather long. Does it need another mechanism maybe with a “More” type structure.

In addition, we’re going to start getting a significant number of duplicates. One assumes that the user is going to have to choose a unique name on sign-up and they might go for @John_Smith2 - but how are people going to know who is who? Can some other metadata be displayed in the drop down list? CAMRA is arranged into branches so “@Rob_Nicholson (Macclesfield & East Cheshire)” would work well for me.

Is it because the number of entries on the drop down list is limited and we have loads of people whose name starts with Chris?

Yes, most likely. I think it makes sense to at least present some sort of visual cue in the drop down to denote there are “more” matches. 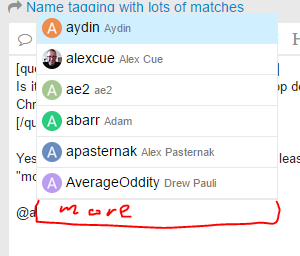 Even if it is not clickable, at least it would be clear that there are more users matched.

Where would that “more” link to? The users page with the search pre-filled?

Or maybe instead of “more” try out “showing X of Y” so there is a subtle hint there are more. (granted that may get confused with total number of users)

that is a non starter, it means we have to count all the users, imagine counting 50,012 users in a 1 million user table just cause you type @ a

Fair enough, I was simply trying to think of a phrase that may would better than “more” (not linked) or even creating “more” with a link that would take you away from the response you are trying to write.

Just “more” feels liks something people will attempt to click to “load more”, which I guess you could do. You could actually load 6 more, it would make for a fairly large autocomplete box, but the data is already there to be loaded (in a sense, as shown in the network tab of the call – it returns at max 20 results).

How about opening up a pop-up dialog that has a scroll bar that’s filled as you drag it down. Sure performance might be sluggish. It could also display that additional data to help isolate the user. In a traditional postback world with a grid control, one would use the page mechanism. Yes I know you don’t like paged results.

Aside - discovered you can type @surname and that finds Chris but wouldn’t have helped me here directly as my first assumption was she wasn’t on Discourse. Plus we have a lot of “Smiths”.

While I doubt this would help the use case @Rob_Nicholson has, specifically, a query that returns users that have been frequently contacted by a person could be used instead. It might not be a great UX for the first time you mention @.someone, but the second time @.someone would be the first person the system could come up with.

I agree we could do a better job here, @sam’s suggestion is a good one, but I am unclear what “more” goes to at the moment.

This came up on our instance recently. I recommended the approach of typing @Surname.

I think it may be worth looking to Facebook for some inspiration here:

One improvement could be to not have the pop-up exit until a name is selected or a click away from the pop up.

Then I could type @Sam Saff to complete @sam’s name.

It could even allow me to type @Sa Saff

This kind of discussion has occurred before, specifically for showing more:

@mention autocomplete: can we increase number of users and groups offered? scroll down? ux

We have 9 groups we use for mentioning and messaging staff, all with the same @namati_ prefix. Unfortunately only six show up when you start typing @namati_ in the composer. There also is nowhere else to go as a user to find the full, current list of groups that can be messaged or mentioned. So suggest upping the number of suggested groups to 10 or providing a means to scroll down or arrow down to pull up more matching results. [image]