The DSLreports.com site’s custom forum software has categories like this for customer support and it’s super useful.

You have this in the Current version or a plugin?

I would love to have this as well for a gaming forum I’m in the process of setting up. I want to have a section where low level players can ask high level players questions. Similar to this.

I came here to request the same thing or very similar.

My scenario is a board that is private with patients and doctors/health care professionals. The concept is a live Q&A session. The patients could submit questions (topics) to a queue (category), all members could see the questions and answers, but only the doctors could respond in the category. Ideally the topic creator could also reply to their own topic. This way doctors can see which topics have answers and other members could vote on the questions (topics) before the doctors come to answer, thus promoting the popular topics to the top. If the topic creator could reply in their own topic, then the patient and doctor could have a conversation, while allowing other members to read/see.

As you’ve described this, a Q&A platform is a better fit (no surprise, since you called it a Q&A!). Q&A platforms do this very well, and the result is a knowledge base that can be searched and used forever, and users tend to be much more careful about topic titles and contents, because they are intentionally going to become an archive.

We’ve been thinking about using Discourse as a support forum solution for our product. We need a similar feature where TL0 (new) users should be able to post a topic into a “Private Support” category. This category should be visible to all users but topics posted into the category should only be visible to the original poster and “staff” (or some other blessed group).

Without this feature I don’t think we can use Discourse as a product support solution. Sometimes people want to request support but don’t want to do so in a public way. They could just send us an email but then that makes it difficult for a group of people who can respond to know what other support staff have said.

Group private messages could also solve this problem but:

Sure, and as you can see that’s been discussed before. It’s a different use case though, it’s a bit more like private messaging than Q&A.

Sure, and as you can see that’s been discussed before. It’s a different use case though, it’s a bit more like private messaging than Q&A.

Yeah, a Q&A platform might be a better fit for our use case. It is just annoying to have two different systems for Q&A/Support and general User-to-User discussions. Nicer when one system can fit both models reasonably well and I think with only minor changes to Category permissions Discourse would do the trick.

I have a use case for this. I’m running a gaming forum (for a guild) and we’d like to have the ability to accept applications to join the guild.

I’ve been digging around the permission code in the discourse backend but it’s still a touch tricky to get my head around. If anyone could give me some pointers that would definitely make things easier.

Edit: After playing around with this idea for a few hours, while I’d like to see it there appear to be a few serious roadblocks that make this concept pretty tricky to pull off as a plugin so I’m hesitant to continue unless this would be something that would be merged into discourse as a whole:

While I’ve managed to get most of it working by just hacking the discourse code (I haven’t gotten it filtering the topics in the protected category) I don’t want to continue since deploying this code isn’t really something I could easily do.

If this is low hanging fruit, go for it.

But if it’s already tricky and the support ticket use case us under serious exploration, I am not sure the category permission paradigm is the best place to start.

It may be worth exploring enhancements to the private messaging feature to enable these workflows.

The flexibility to add (or remove) additional recipients on either end was always something helpful for us when using any system for support tickets.

A few more thoughts here, but I could say more if that’s really the goal.

Would really love to see this too. The simplified permissions model is usually a boon but for this one case.

We could kill off several other tools/services overnight if this were implemented, particularly if users had the ability to create threads in a particular category and only see the threads they’ve created.

I would like to see better group mentions and PMs.

Together I think this would cover the sentiment behind the original request.

Allow for a search filter to:GROUP_NAME to see all PMs sent to a particular group in the full screen UI

Could also later explore things like a tabs on your own messages page for messages to groups you belong to: 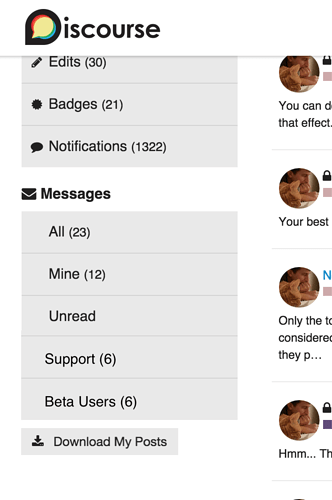 and/or the group page itself: 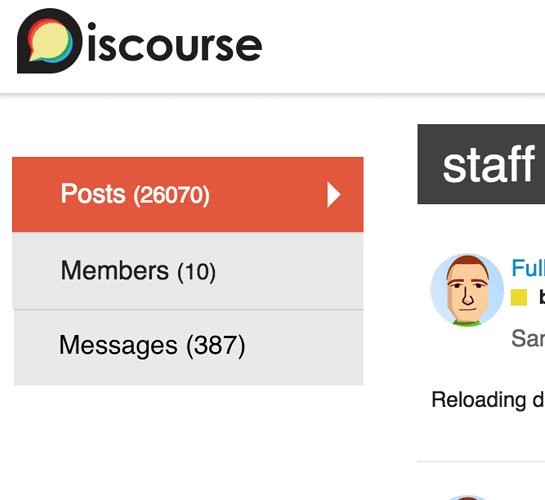 That PM thing would be great. On Imgur Community it can be hard to find my personal conversations in the sea of flag-initiated PMs. It could also help address the problem with admins being deluged with their copy of outgoing Welcome messages.

Following up on this one, is it still planned? Or easily achieved? We’re approaching the point where the products I mentioned are up for renewal, if Discourse is going to offer a ‘create and see’ permission then now would be a great time to know

“Create and See” works fine today, you simply create messages to a group. If you emails team@discourse it create a message that our team can read and reply to. It even stages a user for the person who sent the email.

How do we streamline that process for the original purpose though?

If we want users to create new threads for support, are we asking them to manually enter the group they want assistance from?