A user on our site from the other side of the country pinged me last week on Slack because they were confused about a handful of things: 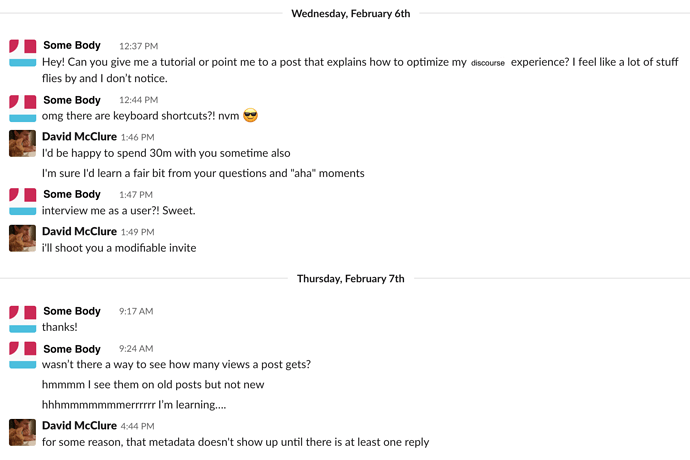 We hopped on a Zoom a few days later and I watched his screen while he navigated around the site, speaking aloud about what he was looking for, and occasionally asking some questions.

We also made a little time just to chat about what kinds of things he was hoping to do on the site and why. One thing he’s looking to do is encourage folks to post more on our internal Discourse prior to drafting blog posts for external publishing. There are a handful of different places for people to blog (personal blogs, a more informal engineering blog for the company, and a more polished blog that marketing gets their hands on).

Aside from that, he’s just a user on the site who tries to stay on top of what discussions are going on, to stay informed and to point others to conversations they may be interested in. He’s an engineer and he still writes code, but he’s also one or two levels up in the people management side of things, so he’s got a lot of information coming at him from various sources and is always looking for ways to improve how to manage that and help others do the same.

Some of his recent posts have been sharing tips with folks about how to search Google Sites more effectively and how to choose some calendar settings that make invites friendlier for folks receiving them (e.g. turn on “Guests can Modify this event”)

Some things I observed

Happy to split out separate topics for any of these where there’s interest, but I just wanted to start by sharing these together here, with the same shared context:

We’ve had some good growth in monthly active users recently, I think reaching the upper bound given the size of our organization, but many of them do not use it on a daily basis yet.

Here’s a snapshot of usage over the past year:

And here’s what the stats for this user look like (Note: I’ve significantly lowered trust level boundaries on our site because there’s a lot of trust already built into our system):

This was just one person, but I think he represents an important slice of our current users. I’m planning to do this with others in our organization occasionally to understand where we can make small tweaks to help (and to offer them some opportunity to speak directly about how they can best take advantage of the existing tools).

But perhaps these observations will also offer some insights into what things we might do in general to help improve the experience for users at this point in their adoption.

Why is he posting topics that never get replies? I view that as a failed discussion, or perhaps a blog entry with comments disabled?

In this case, it did get a reply. It just took a while, and during that time, he was looking for the view counter within the topic and confused about why it wasn’t there.

And while most topics are discussions, some topic are really more internal announcements than discussions. Posting them on Discourse rather than just on email makes it much easier to find them later (via search) and to share them in other places (like Slack, where far more people are idling at any given moment).

It also allows folks to ask clarifying questions, air their complaints or add some additional helpful tips or references. Some announcements spark those responses, but not all do.

(topic map)
I explained it only shows up after there’s at least one reply
Aside: Is there a way to customize that behavior? I’d now prefer to just have it always show up.

I can see how that could be confusing. Unfortunately not too easy to customize at the moment - the logic is buried in the middle of a function

I think Discourse was right to say no to threads within topics, I personally don’t have a problem with using the term “thread” and “topic” interchangeably on our forum

Personally I agree - a topic is a singular thread of conversation (singular, not plural). Using established language makes it easier to introduce people to new systems, so I don’t think there’s anything wrong with using the terms interchangeably in discussion. However, in UI/documentation, I think it’s good to pick one.

We only do this on a user’s own profile. Not sure of the history here but it might make things more ‘discoverable’ if we expand by default everywhere

Thanks! These are really good insights. I am regularly reminded of how different my experience of Discourse is vs. first time users. To me, the software is intuitive. But, I forget that is a learned intuition. What Discourse feels like when it is brand new is quite different depending on the person’s age and experience.

For instance, I have had a number of people express a sense of horror or discomfort when they drag and drop a file into the input tab and see the long, ugly URL string. It isn’t until I pointed out to them, ‘hey, it won’t look like that when you post, look over here (to the right), that’s how it will actually appear’ that they are relieved that everything is working properly.

For me, if there are ways to hide the advanced, ‘coder’ level uses of Discourse so that the average, everyday ways of using the software was more prominent and obvious, I think that will help people.

For instance, for the “watching” notification:
“You will be notified of every new reply” raises questions: how will I be notified? Where?
“A count of new replies will be shown” Where? When? How can I view that?

I think these UI screen-sharing experiences with newer members are really eye opening.

For me, if there are ways to hide the advanced, ‘coder’ level uses of Discourse so that the average, everyday ways of using the software was more prominent and obvious, I think that will help people.

Yes, to this. For a general audience, I’ve considered biting the bullet and coding a mini-Discourse with the same approach to trust levels and threading, but with all of the markup support removed. No making text bold or italic, no headers, no tables, no image syntax, and support for images and links would be slimmed down to “attachments” and a regex for linkifying URLs. That way you don’t even need a preview pane.

No, to this. The proper way to do it would be mostly eliminating icon-only buttons (the chain and flag are particularly bad for usability) and making buttons less flat (which can easily be done in a theme).

Personally I agree - a topic is a singular thread of conversation

Notice the person in question is a programmer:

Thread is BS programmer talk. It’s bad jargon for the sake of jargon, not to be propagated. Wouldn’t be… uh… “performant” so it isn’t … recommendant.

I don’t mind it in the context of email systems, though, which have a ton of legacy around them.

but with all of the markup support removed

Trivially easy, just use CSS to hide the editor toolbar (or almost all buttons on it), then make the editor full width which is already supported. At that point … people are typing plain text in a box.