I am a fairly active but fairly new member of a forum that is pretty old, and migrated from ipBoard in 2018. As someone who is generally more interested in the old forum than the new one(it was for a different but similar topic that I was more invested in), I have done a lot of reading on the so-called ‘old forum’, and I’ve noticed a lot of things that are potential bugs, glitches, or that just plain don’t add up, and I was wondering if anyone might have an explanation.

I couldn’t get any screenshots for this, and I can’t seem to actually find the posts anymore, but there are some posts from 2013 to 2014 that for some reason have edits. This can’t have been done by the person who posted it(none of them have been active since about 2016 at the lastest), and it seems strange that any mods would be editing random posts from 7 years ago(they barely even edit any posts now). I’m not really sure what to make of this, honestly.

As seen above, there are a few examples of dates not lining up, such as posts made before the supposed account creation date, posts made after a person last posted, and other such oddities. It’s worth noting that this isn’t some universal thing caused by the transfer. Most dates seem to be accurate, which only makes the inaccurate ones weirder.

This one has it all. Spaces several rows long, even though Discourse normally compresses it down to one 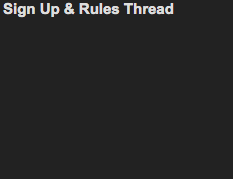 Symbols I can’t seem to recreate

And even being locked by seemingly no one

I’m sure there’s more, but this topic also happens to be about as fun to read as the US tax policy, and about as long, so that’s all for now.

If anyone has any idea what is going on, I’m curious. There were also a few other things that were either very minor, or that I could just blame on technical limitations of the transfer(lost posts, altered usernames, etc.), or on human error. Still, I feel like these are more than enough to warrent explanation. Wouldn’t you?

Ok. I found a screenshot of these old edits

Not really. Migrations are harder than i think. And I’ve done dozens of them. And whatever it is that went wrong went wrong only to they one forum that one day. There isn’t much to talk about. And if whoever was responsible for running the migration and noticing if it was right or not didn’t notice when the migration was done there isn’t much you can do about it now.