It should be possible to open the New Topic (and preferably even the Reply editor) pane in a new tab/window.

This annoys me every time I use a Discourse. I was hoping the feeling will go away, but even after years of using several different Discourses this still bothers me a lot. It feels like working on a Netbook (you know, those tiny notebooks that were popular a few years ago).

What makes the problem worse (for me) is that I can’t seem to remember this problem before I start drafting a new topic. So what usually happens is:

For a system that obviously has put some thought into feeling natural, this process feels very unnatural to me.

I realize that the “Quote” workflow as it is might not work well together with this, but that’s a small price to pay, and could probably be easily solved by storing the Quote (just like the draft is currently stored) and adding a “Paste quote” to the editor.

As a small screen user myself, I’m not feeling the pain like you do. My current computer is essentially a high-RAM Chromebook. Sure sometimes the window feels small, in which case I’ll edit outside of the browser instead of in the reply window. This is really easy in Firefox, with the It’s All Text add-on.

I understand Chrome is not so easy to modify like that. So…

You might find it easier to make the original tab’s edit window full size and open a new tab for browsing around instead, because then you don’t need to worry about the abandon post thing.

This is maxtreme advanced user type scenario. I think we’d work on better draft handling, making drafts easier to get to from a list in the UI, etc, before this.

I don’t think this is too advanced. When you write a new topic, you will look around other similar topics and collect information that is already there, don’t you? And when you do that, don’t you put your input (be it Notepad, Word, Evernote, GitHub issue, whatever) on the other screen? I pretty much always do that. That way I don’t loose track of where to continue my text after looking something up.

But I agree about the “before this” - if there was a list of drafts and you could call up any draft in any window, it would be trivial to open a draft in a new window as well.

You can move around to other pages while editing your draft. 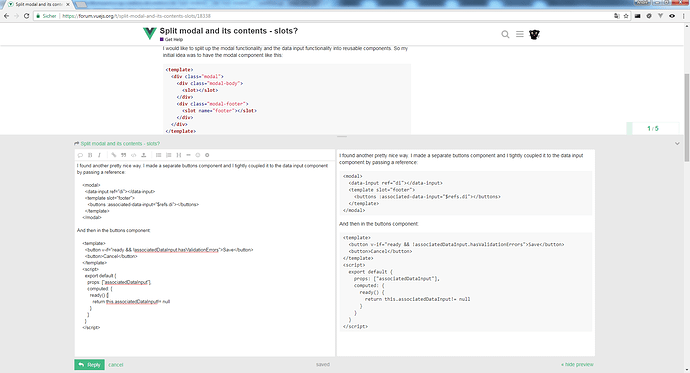 I am composing an answer to this thread which I’m pasting together from a combination of code snippets from previous posts. I can barely even see which post I am copying from, while my other screen is sitting around feeling useless.

You can resize or completely minimize the editor if you want more reading space.

But I’m comparing what I’m writing with the original post… that would be much easier if I could see both at the same time.

Resizing the editor makes the text move which in turn makes my eyes lose the position I was reading.

In this specific example why not simply open a second web browser instance to your site?

why not simply open a second web browser instance to your site?

I do this every day, many times a day - works for me.

The only confusing point is partial “drafts” / edits different windows and making sure you continue editing the right one.