Posts are hidden after a single flag

Again I highly recommend your admins look into sensitivity. There isn’t much more to say until they have tried that out.

It seems so, I am surprised this was altered and had no reason to know/believe it would be. That it happened with the update made me suspect it was to do with that, because the system we had was working great (and hopefully will again), and I cannot see the settings, which I hope you may consider giving mods a view of in the dashboard please?

And hopefully the issues I described above will be useful to anyone debating setting their threshold at 1 flag, especially if they had previously been higher.

On our forum there is this possibility when flagging (top option) which notifies the person being flagged via a message directly from the flagger. Which can be sent before reaching the threshold where the system message kicks in and their post is greyed out or hidden. This would explain how users know they are being flagged.

That’s… not a flag at all, in any way whatsoever. It’s just a PM like any PM you would send.

Seems like your issue is that the flag sensitivity settings have been manually adjusted by the staff on that particular instance, @ubik.

Seems like your issue is that the flag sensitivity settings have been manually adjusted by the staff on that particular instance, @ubik.

It seems not, the forum admin didn’t mention doing this when I raised it with them. We communicate, and this doesn’t seem to have a known cause.

I ran some tests to try and define this better:

Posts flagged by TL3 Regular users with 100% down to 62% (I did not test for below that) weighting for Agreed flags, are causing the posts to be hidden immediately by one flag, when those flags are cast for “Off-Topic” and “Inappropriate.”

And a factually incorrect PM is sent to the user whose post was flagged that “Multiple community members flagged this post before it was hidden.”

But flags for “Something Else” seem to act as before, they notify review queue (as it now is) with red icon. But do not hide post/send PM.

These are the types of flag: 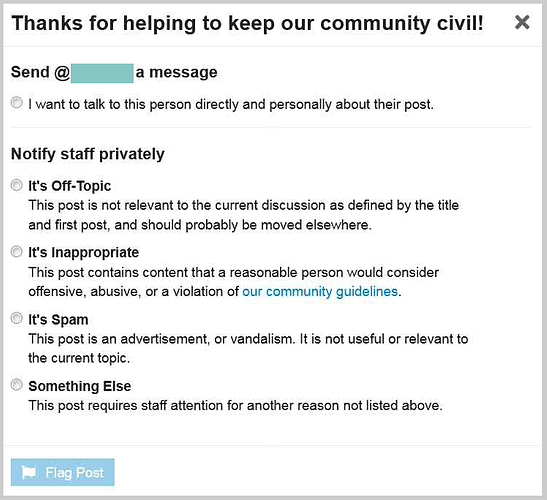 This happens even if the user whose post was flagged is TL3, and I wish to emphasise having read around this is not to do with “Spam” flags nor is any abuse or other untoward behaviour occurring.

TL3 members used to be able to chose a flag and it would not automatically hide the post; now, only “Something Else” flags are acting in this manner.

This is to let members know in the signup PM, and also in the Lounge, how to use their member-moderation abilities to help keep their community civilised.

There may technically be no immediate “problem this will solve” but as moderators are the main people interacting with members over what happens when they flag, and often, working hard to motivate them to do so, some idea of what to expect before a problem lands in our laps would be helpful, please.

So to recap, two out of three of the non-“Spam” flagging options are now acting in a new way, a bit like the “one flag hides” for TL4, described elsewhere, and I think this may be the root of the questions about this.

Posts flagged by TL3 Regular users with 100% down to 62% (I did not test for below that) weighting for Agreed flags, are causing the posts to be hidden immediately by one flag, when those flags are cast for “Off-Topic” and “Inappropriate.”

This might be true on your forum that accuracy 62-100 is enough, but there are other factors that determine if a post will be hidden. Again I implore you to read this post which those factors.

is it intended that the “Something Else” flag is as different to the others as “Spam” is (insofar as “Spam” immediately hides a TL0 post when cast by a TL3 user)?

I’m having trouble parsing your question here, but “Something Else” flags have never been able to auto hide posts, nor is this now true with the review queue. The flag types that can result in posts being hidden automatically are “Off Topic”, “Inappropriate” and “Spam”. Previously if you were TL4 they would be hidden in one flag. Now, it depends on the score that is calculated.

Will admins adjusting sensitivity in the admin control panels described here end the red icon that is shown to all Staff (mods, admins) on the hamburger when they first log-in?

No, sensitivity affects how strong an action is (ie, how many people performing it is required to do something like auto hide.) It does not affect the count in the red circle, which is affected by review default visiblity only.

if the intent is for one flag to hide posts with weighting and Trust Level factored in, any chance the default PM can be edited please, so it does not incorrectly state multiple people flagged the post?

This is a good suggestion and I’ve updated the text to be more clear:

changed 1 files with 2 additions and 2 deletions.

can Discourse please give some idea of how weighting works, in non-TL3 accounts?

Perhaps you can explain how I could improve this post as it lists all the factors involved in scoring posts and I think it’s quite clear.

P.S. That topic was appropriate, just some users had some “fun” time.

Any comments on the above @eviltrout? Perhaps a “show me how this was arrived at” button would be helpful on the flags to teach people the specifics. That way we don’t have to clutter the UI with a lot of extraneous info, but for those that want to “dive deep” they can click to learn why.

Some information will be helpful, but still…
Today was another tl2 flag on topic, and topic was hidden again. We must have a moderator on duty to keep one topic from disappearing. And user already received 5 system notifications and in a panic.
This is definitely strange behavior.

I plan to add this, hopefully this week.

I have a pull request for my first stab at explaining more about reviewables:

FEATURE: Adds a pop up that shows a more detailed score for reviewables 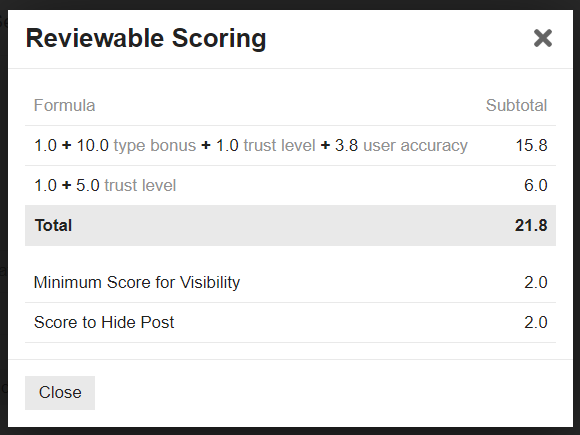 Totally don’t understand how I can deal with flags spam. User with high disagreement ratio still can flag any posts, and without ways to restrict him from this I found “User Flagging Ratio” section in admin interface useless. I can lock user on tl0, but this affects not only flag ability.

This is definitely becoming an issue - there are high-trust users who flag items they disagree with or otherwise would be denied by moderators, with agree-ratios of -70% or more. We combat this by having the sensitivities set accordingly, but I almost wonder if there isn’t a point that a user’s flags should be outright ignored if their ratio drops too low?

I guess the problem there is, how do you ever get that user out of “flag-purgatory” if they end up in that state?

I almost wonder if there isn’t a point that a user’s flags should be outright ignored if their ratio drops too low?

Probably that has to happen.

how do you ever get that user out of “flag-purgatory”

I see your point, because a moderator is no longer indicating status on the flags because they don’t see them

One idea I have is for the person in flag purgatory to have that purgatory “decay” over time, so those flags eventually get escalated again, then the process can repeat depending on how those flags are rated? What do you think @eviltrout

Hi, I am trying to configure the settings for when to hide a post, but even after reading the info inte the linked howto ‘User Reputation and Flag Priorities’ I am not sure exactly what I choose when I set the different levels of sensitivity. I am currently zooming in on the hide post sensitivity settng.

I would also like to mention that a lot of pages still refer to the 3 flags limit system, so cleaning that up would help new admins like myself. This is an example, What are Flags and how do they work?

One idea I have is for the person in flag purgatory to have that purgatory “decay” over time, so those flags eventually get escalated again, then the process can repeat depending on how those flags are rated? What do you think @eviltrout

Interesting. The “flag ratio” has a timeframe right now, so if we base the purgatory on that alone it would automatically expire. That might be good enough.

Once I get the score modal perhaps we can work with @orenwolf to come up with a new formula to handle this based on real data. I plan to merge it Tomorrow.

Can you clarify the math used for the different settings, Low, Medium and High?

The easiest way to see the math is to wait until the PR mentioned above is linked.

Does Disabled mean that a flag will never cause a message to be hidden?

Would it be possible to add an override so you can opt to use the old system if you desire to?

Can you explain why you’d want to do this?

Can you explain why you’d want to do this?

It would be nice to be able to give the users back the old easy to understand system, we run without high level trust users, so it used to be 3 flags and you are out, no exceptons, worked fine, no one complained.

The easiest way to see the math is to wait until the PR mentioned above is linked.

Ok, what I want to have is a general lookup table for the different terms, so I can calculate the actual outcome on my forum. I guess I can revese engineeer that from looking at posts that got hidden once the system is out, but that will still mean new admins, like myself will have to expose a setting to the users to see the effects of it, and then understand why by looking at the hidden posts.

If, like it looks like, there is a simple system for the weight possible from the different terms in an addition, and a threshhold level for each settings level, it would be nice go get it from you.

so it used to be 3 flags and you are out, no exceptons, worked fine, no one complained.

I would be open to the possibility of a setting to remove the various weights and have the scores for each flag be 1. However I highly recommend you upgrade to the latest Discourse and use the new (?) icon feature first to look at some values.

Try it out for a bit and come back with some feedback based on the scores it’s showing you.

I can confirm the the (?) feature is now in discourse tests-passed, and I’d love some feedback.

We just had a TL2 user flag several posts in a thread as off-topic and they were immediately hidden before I had a chance to review the flags. This resulted in the OP getting a bunch of emails which were unwarranted. The scoring shows 1.0 + 2.0 trust level + 3.0 user accuracy, for a total of 6.6. But the score needed to hide post was only 3.9. That’s a huge differential, and I suspect setting the ‘hide post sensitivity’ to low wouldn’t have made a difference. I think only TL3 users or above should be able to auto-hide a post.