Prevent someone from using private messages

Sometimes you have a valuable user who can get nasty in private. It would be useful in this case to simply prevent this user from using private messages entirely. This could be a temporary measure to keep them on track (applied to a specific user), or a permanent feature—for example, it could be applied to a group so that adding a user to the ‘public-only’ group would “grant” them ‘private mute’.

Why not demote them (temporarily) and raise?:

That is what I was thinking. I know they are a “valuable user” but if they are nasty in messages wouldn’t that behaviour also be reflected in public topics?

Although it’s a good idea @merefield, the TL combo would also affect other people.

wouldn’t that behaviour also be reflected in public topics?

I wish the situation were simple, but it’s not.

Sorry, my message isn’t about the actual proposed feature, but the case you’re mentioning.

Are the nasty messages flagged by the recipient(s)? If they are, why not apply a standard moderation procedure? I.e, give a warning and let they know that the’ll be suspended if they continue to post these messages?

Did not work. User was already suspended once. Will be suspended more. We’re looking for a general case, reusable feature.

User was already suspended once. Will be suspended more.

That doesn’t really sound like a “valuable user.” The last time the user was suspended, was he/she warned of possibly being banned? The threat of banning them may make a slight bit of difference. If not, that person is not going to change their ways.

I’d say @hellekin has noted down a feature that shows a valid need that has been experienced in the community they manage. While it may seem that the problem it solves can be solved in another way, this is still a valid feature request. If we want to discuss possible ways to resolve the perceived issue, a new topic may be helpful so we can stick to discussing the proposed feature.

Let us also note that, if we want to create said topic about discussing other solutions to the perceived problem, we should keep in mind and possibly wait for hellekin to ask for the solution.

What might work would maybe be a theme component that hides the message button.

Now is that you want to prevent/mute there pm/dm to all users or just ppl there annoying?

@osioke does the profile option mute user also prevent them from sending a pm/dm to the “muter”?

@osioke does the profile option mute user also prevent them from sending a pm/dm to the “muter”?

PM’ing and DM’ing should still work, but the notification will not be sent, the description of muting explains this. 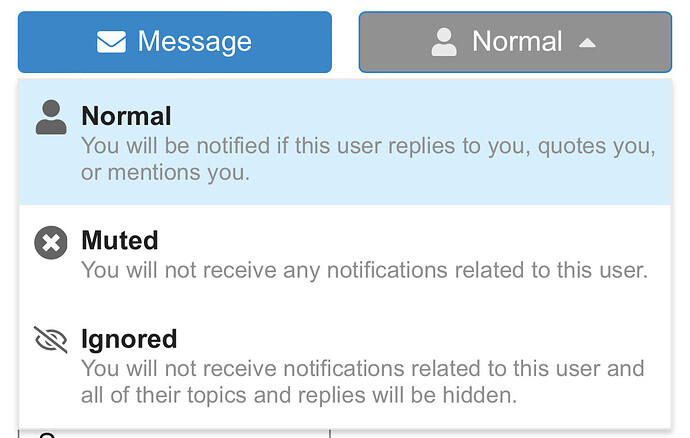 Also, no need to mention me directly for the question so others can chip in if they have some thoughts and not wait for me to answer.

Did not work. User was already suspended once. Will be suspended more.

The forum I co-administer also had a user like this. Super knowledgeable, helpful person, but with some ugly social bad habits that would occasionally rear up. They would get flagged occasionally in public, but their PMs were worse—they didn’t apply the same level of self-filtering and caution as in public. After several warnings and multiple suspensions, we ended up needing to ban them permanently. So I sympathize with the desire to block PMing for particular users. That said, in the case I’m talking about, I don’t think such a feature would have ultimately prevented this user from getting banned, due to their occasional sufficiently problematic behavior in public. But I can imagine there being users for whom a no-PMs policy would be effective and keep them sustainably engaged in a more harmonious community.

Ideally, the user could be muted by default, and individual users could choose to lift this limitation for themselves. Admins would have to manually mute the user though. Does it make sense? I mean, would that be doable within the existing mute-ation framework?

Good question, I am not sure though. Let me leave this question to the more technical folks in the house

After consulting with @Dax, I have realised that technically it should be possible with the muting feature, but it would mean a lot of manual work of muting for each new user.

That said, that could create an issue waiting to explode, but it seems you are aware of this and accept it, so

Why not demote them (temporarily) and raise?:

This is also what I would do:

I think when you manually set a trust level it doesn’t promote, but might be wrong.

Also, because they are flagged you could utlise this, and make pms available at TL3 and TL4

@osioke It might be more achievable to just create

this for tl2, tl1 and tl0? Then if you have a tl0 user who has had 3 flags in the time period they don’t get promoted to PM privileges – essentially removing the manual work.

it would mean a lot of manual work of muting for each new user.

I do not understand why new users would be affected.

If you alter a user setting globally via the rails console the new setting will be applied for all existing users but not for the new ones. You could run the commands for example once a month to add the user to the muted list or you will have to do it manually for each new user.

So that means the ‘mute’ flag would be replicated for this user to all users. It sounds a bit tedious, especially if we want to lift this flag at some point, or if another user should be prevented from messaging others globally—while retaining their other capabilities (a precision for others misreading the actual need).

It sounds a bit tedious, especially if we want to lift this flag at some point

Exactly! That’s why I said it would or could be an issue.

I think when you manually set a trust level it doesn’t promote, but might be wrong.

You just lock them there, e.g.: