Problems with the new-user webhook

Continuing the discussion from Discourse Webhooks and Zapier:

I want to get notified for every new user which is created in our forum.

The setup is below, and my forum is configured as follows:

When I setup the webhook with just “User Event”, no ping was sent.

When “Post Event” was checked, I did get a webhook with data about the new user (recipient) and the sender of the welcome email.

How else can I troubleshoot new user creation’s webhook sending? 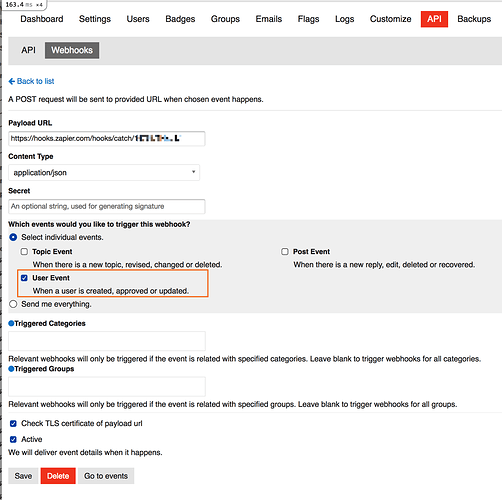 Any ideas here for troubleshooting @tgxworld?

When I setup the webhook with just “User Event”, no ping was sent.

Can I clarify if you tested the “ping” action or do you mean that user events are never sent?

I realised I probably posted on the wrong post before - on the user creation / update is it possibly to get the email address added into the payload? As was surprised to see this is missing. Also I have noticed that it only seems to be sending out users that have updated their profile rather than new ones registered. For example I sent an invite to an email, registered via the invite of which auto approves the user but is not showing up in the list having been sent only the ones that I have u…

Have not revisited it since

Correct… I should have said “no webhook was sent”

I can use the ping feature, and zapier sees the ping just fine. I did see an event sent for the welcome message.

I didn’t see a new user webhook on either of the new users I tried.

I guess there’s a bug here:

A user self registering did not send a webhook.

Are you sure this isn’t because of your SSO?

The user I tested with signed up with a username & password. I don’t think think so.

we don’t use traditional SSO

I feel like this is a bug @tgxworld – why would the new user webhook not fire?

updated my test environment and built some new webhooks into zapier and seems to work well thank you for that!

As i believe it was something that fantasticfears was working on as part of the original webhooks pull request that was open - is it possible to get the email address included as part of the payload.

4 Likes
Should the email address of a new user be included in the webhook?
watchmanmonitor (Allen - Watchman Monitoring) March 16, 2017, 1:49pm #13

Confirmed, I updated to latest this morning, and about 20 minutes later, had a new user register. The webhook fired & my zap worked great.

EDIT moved the feature request to a new thread

I just tested with the SAML plugin, and with a normal user/pass account.

The best part here is that the webhook is sent at user registration, even before they confirm their address (or forget to…)

Now I can proactively track down people who try to get in, but never finish.