Publish to Discourse and scheduling

So we have a problem when posts are created or published by other plugins, the value specified for ‘publish to discourse’ is always ignored.

Discussing the issue with one author of such a plugin the response was:

In some cases we aren’t able to accommodate for plugins that don’t trigger filters/actions in a global manner.

Is this a possibility? Raised this on github a while back with @benword and thought it was worth checking before I reopen the issue.

The plugin uses the transition_post_status filter so it should be fine. Maybe something in the publish_post_to_discourse function needs to be updated.

Could you provide us with which plugins aren’t working for you so that I can try to reproduce?

The big one at the moment is CoSchedule:

The only marketing suite that helps you organize all of your marketing in one place.

It’s tied to a subscription service, so if you can’t figure out what they’re doing from the code let me know, I might be able to give you access to a site where it’s implemented.

Did you need anything from us to look at this one @benword?

I’m able to use wp-discourse with the WordPress scheduled post functionality, so if a plugin is causing a conflict it would be helpful to reach out to that plugin author (especially since you’re paying for a subscription from them).

I’m having this same issue.
Posts that are scheduled (using native WordPress) don’t publish to Discourse automatically. I have to go back once they are published and hit the Update button in order to publish. Any ideas what I could try @benword? 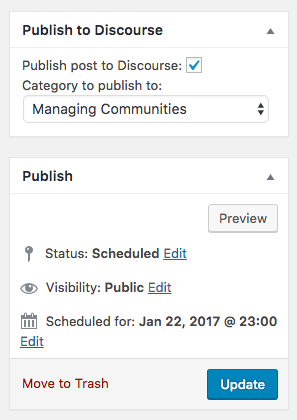 In my development environment scheduled posts are published without any problem. Are there any plugins on your site that deal with scheduling posts?

Edit: I’ve tried this on a live site as well. It’s working, but I noticed a strange behaviour when the ‘Auto Publish’ setting is not enabled. For some reason when a scheduled post is saved the ‘Publish Post to Discourse’ meta-box value is not updated. This means that if a post is scheduled and then later updated, it will loose the ‘Publish post to Discourse’ value. I’ll sort this out right away.

Thanks for reporting that!

Thanks Simon, I appreciate the quick response!

Will this mean that I need to reinstall the plugin?
(Unfortunately I can’t do that as it overwrites vital functionality every time.)

Will this mean that I need to reinstall the plugin?

Yes, you would need to update it to get these changes. If the problem you are having is the one I fixed, then you are probably seeing behaviour something like this:

If, at this point, you don’t update the post again, it will be published to Discourse with the values that you initially set. If you do update the post before it’s scheduled to be published, you’ll need to recheck the ‘Publish post to Discourse’ checkbox and also make sure that the correct publish category is selected before you click ‘Update.’ Those values will again appear to revert to your default ones - the correct values are saved to the database, but they aren’t being used to populate the meta-boxes for scheduled posts, so they’re being overwritten when a scheduled post is updated.

Thanks for the clarification.

That isn’t quite the issue that I’m experiencing.

Which plugins are you using?

Is this self-hosted or are you using a WordPress host? If so, which?

Which plugins are you using?

As in, all the plugins? Or for this particular issue (in which case the answer is the official WP-Discourse plugin)?

Discourse is hosted by Discourse, WP is with WPEngine

WP is with WPEngine

Do you have WP Engine Alternate Cron enabled?

I suspect not, as I just found this [below] in the support docs and I’ve never requested it. Are you suggesting I do?

This is not enabled on your server by default, so you will have to request to have it enabled via Support.

No, I was just curious if anything is affecting how scheduled posts are published on you site.

A number of plugins alter aspects of automated publishing. The old Editorial plugin and Coschedule are good examples of this.

You’ve prompted me to deactivate a few plugins that I don’t think we need – I was overdue for a clean up.

I appreciate the help - thanks to you both.

Actually, while going through the above process I found both these, which may have an impact.

Thoughts on disabling these? I’m not sure that they’re necessary.

Using those two plugins makes sense, but it’s also quite likely the cause of the problem. There’s a small change that can be made to the wp-discourse plugin that should make it compatible with the Missed Schedule plugin.