I have downloaded the app so that I can be notified of certain websites.
The notifications aren’t shown to the user as push notifications. So there is no point in needing the app.

As per the app description, push notifications are only received for hosted sites:

Are you using an iOS or Android device?

I am using IOS
20char

Unfortunately there’s not much we can do here. If you were on Android, installing the site as a PWA would work. iOS does not support push notifications from PWAs like Android does. You could talk to the site owner about using something like Pushover notifcations, but that plugin would need to be installed on each site.

I think it is a great thing that discourse has done the step to publish an app for both iOS and Android to make multiple platforms easily available for the user. The only thing that’s a real issue is that push notifications do not work properly.
For iOS: Sometimes I can see a little number on the app icon, notifying me about new notifications in the app, sometimes this icon only appears after I have recently opened the app. Sometimes inside the app on the communities overview, I can see a number next to the corresponding community, sometimes this number does not show up even when there are notifications shown when I open the discourse form. And sometimes, in rare cases, I even get real push notifications known from all other apps; usually after closing the app and a new post was created a few seconds (maybe like 30 seconds? I heard, the new iOS version kills processes after about that time) after closing the app.
The notifications for Android users seem to be similarily unreliable.

I tried Pushover to send notifications from my discourse instance. What is bugging me here is:

This is not the way to go in my opinion.

To be honest, I don’t know how discourse currently implements push notifications for their Android and iOS apps, but I have been searching around the web for solutions and found a chat app called rocket.chat. It seems they have managed the issue of distributed services which cannot send notifications to a general purpose apps: Rocket.Chat Documentation - Push Notifications
Their approach is quite similar to Pushover: The self hosted service (in this case the rocket chat server) configures API keys and sends the notifications to a web service, the so called push gateway. That gateway is the registered sender of push notifications for this app and forwards the messages to the iOS and Google push notification services so that they are shown in the app (so the rocket chat app).

I would love to see such an implementation for discourse as users nowadays rely on push notifications quite a lot (email does not seem to be comfortable enough for most of the users). 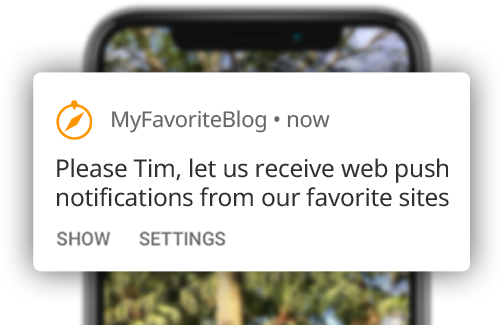 I would love to see such an implementation for discourse

That was previously discussed and it’s not something we plan on offering.

No, we have no plans to offer Google Play / Apple App Store paid notifications as a service. Also no to your point one, the app is a wrapper around the website that gives “native” notifications and multi-site aggregation services. It is what it is.

Thanks for pointing out the discussion, Rafael. That’s really bad news though. Although it is over two years old and might not have been up to date anymore.
May I ask for the reasons this feature won’t be implemented? It would be an outstanding feature for a forum software I assume.

We will not be doing this. If it is a requirement for you I suggest finding other free software that better meets your needs.

May I ask for the reasons this feature won’t be implemented?

I can provide this. Fundamentally cause this is Apple’s job not our job. They are the ones who suck here, Android have supported this for years.

Why should thousands of self hosted Discourse instances send us private user information? If this thing is opt in what could we charge for this? At best pittance. This introduces a legal liability for both Discourse on various self hosted instances out there.

This is not going to be happening, some third party can create a service for you. The APIs are all 100% open.