I’ve been looking into staged users and want to be clear that staged users won’t be getting any extraneous or weird emails from discourse. Please reassure me!

Staged users (see screenshot below) appear to have email preferences set just like new users. This includes the Activity summary which by default would be delivered weekly and mentions and messages. Am I right in assuming that because staged users are staged and inactive that they won’t be getting emails? 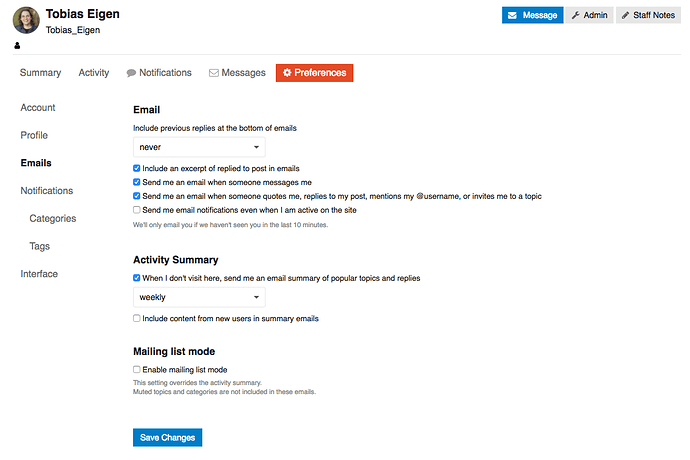 Staged users can only answer via email and claim a real account if they register an account using the same exact email, that is it. @zogstrip am I missing anything here?

So they get emails when they are sent personal messages and that’s it?

One more thing to watch/check:

Emails forwarded in stage the user for the original sender if you have that feature on.

It seems very agressive to allow a user to forward an email and create a staged user for someone who has no affiliation with the site.

I like staged users for direct inbound emails of unregistered users.

Would prefer to allow forwarded emails but have a setting to not require staged users for the sender of the original email. Simiple use case - forwarding emails I get from other email lists into Discourse.

Thanks for the input, Steve - much appreciated. I think I am beginning to understand how it all fits together and I like it!

According to the admin settings, it is possible to limit by trust level who gets to reply to staged users.

Also, it is possible to set up the incoming mail to post to a category (I think) or to personal messages with a group. I prefer to do the latter, which limits the risk somewhat because I can work with my team on how to deal with these messages.

That said, I am still a bit sad that the emails staged users get doesn’t ‘look more like an email’ so these people we do reply to don’t mistake our messages for linkedin style spam, but still has some vestiges of discourse styling - but @codinghorror has indicated that changing this is more effort than it is worth.

Yeah, that’s pretty it. If they receive any other kind of email from Discourse, then it’s a

cool beans - thanks! I’ll keep you posted on my experience with this as I roll it out.