Is it possible to reparent a post in a topic?

You should consider asking plugin specific questions in the plugin topic as those are usually not officially supported.

But yes you can select posts using the wrench command and move them. 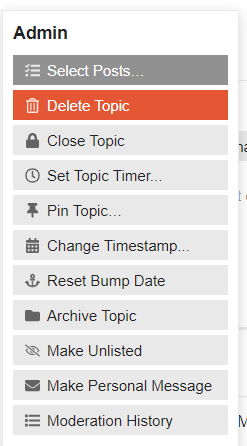 Unfortunately, that is not directly possible with the user interface. The method described by @merefield allows to move a post to a different topic. There are only options that take a bit more effort:

Use the method described by @merefield to move the comment to a new topic, and then move it back to the topic it came from. That will delete its reply-to information, effectively transforming the comment (reply to a post) into an answer (reply to the topic / to the very first post).

Make into a comment by deleting and re-creating it

You would, as an admin user:

Alternatively, you can use the “Impersonate” feature to post directly under the user’s account. In both cases, there is no way in the user interface to change the timestamp to that of the original comment.

Thanks, but @tanius is right, I’d like to reparent in the same topic.