so i rebuild my testing droplet 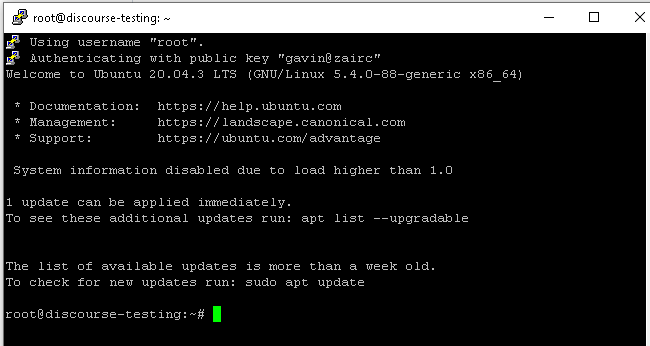 I followed the official install to the t

it failed to install.

Not always necessary, but it’s to pick up updates to: discourse/discourse_docker: A Docker image for Discourse (github.com)?

Are you sure it isn’t done automatically as part of the rebuild? I’ve added it to my to-do list to be on the safe side, but it would be a shame to do even a little extra work unnecessarily.

it failed to install.

Can you please provide the full logs of that failure? I want to track down the issue so we can fix it.

No, not the running site logs, but the rebuild logs where the failure happens.

which files you need ?

They are not files but what goes to the standard output during a rebuild. The stuff that is printed to the terminal while you are doing the rebuild that fails.

One of the first questions I asked here was about that: Installation text location I’m in the habit now of copying and pasting it into OneNote.

If you do a rebuild it does a pull, but a bootstrap does not.

Thanks. Could you explain that in detail?

The reason I ask is that we don’t use “rebuild” on initial installation (which I think is what you mean by bootstrapping). We do use “rebuild” subsequently, but “git pull” is automatically done then. I can’t work when git pull is necessary in that set of three commands.

Is it ever necessary to type git pull either on initial installation or subsequent rebuild?

You don’t need to do a git pull on the initial installation because you have just cloned the repo. The git pull is needed to pull in an updated version of Discourse.

And if it’s an initial installation and you’re using discourse-setup then it does the rebuild (which does do a git pull, but it’s unlikely to do anything unless a commit was pushed while you were running discourse-setup.

Are we agreed then that in the set of three commands in the instructions, the git pull command is never necessary? This is the bit I mean:

Alternatively, you can ssh into your server and rebuild using:

My money is on the additional git pull is unnecessary, because of the code here:

which seems to check the local version, updates and restarts the launcher if out of date (and a bunch of other things).

Therefore only this should be necessary on subsequent rebuilds:

without the redundant git pull.

(NB: always good to dive into the source code so you can be more sure).
(NB#2: have deleted my post above which just added to the confusion).

Thanks. I was sure I’d convinced myself of the same thing somehow (from the forum rather than the code) so searched and found:

Hmm I think we should drop it at this point, two lines is more better than three.

And PS it looks like it’s pretty much “always” worked this way:

re-exec self if we are out of date

I like how on the internet time immemorial has become c. AD 2015

I would add it is not immediately intuitive this stunt would be possible:

Basically the script checks to see if it is “itself” out of date, updates itself (and all associated files), then dispatches itself again.

That’s a really useful pattern to use elsewhere too … great stuff!