I am in the early planning stages for a chat plugin that fulfills the goals mentioned here. When the initial version of the plugin is created I will create a new topic, however this topic is a good place to think about how this plugin will work.

At this stage I’m thinking the plugin will have the following features.

In terms of where the channels would be accessed in the UI this depends on things like ‘1’ and ‘4’. One potential way to do this would be to put a button in the topic list header. Like the other buttons in the topic list header it would be context dependent, e.g. it would toggle the chat for the discovery context you’re currently looking at, e.g. All Categories, ‘Feature’ category, ‘community-management’ tag etc.

Clicking that button would turn the topic list for that context into a chat stream with a compose at the bottom.

I’m not quite sure how channels with users or groups of users would work yet. One thing that has to be figured out in this respect is how 'user/group channels would be distinct from the existing ‘user/group messages’. One way to do this would be to just have a chat that corresponds to each private message topic, however you run into a similar kind of issue I referred to above in the context of a chat channel for every topic, namely it’s not clear how the ‘chat’ and ‘topic’ post streams should interrelate. Should all chat messages also appear on the ‘topic’ version of the private message? I think it would be best to keep ‘private messages’ and ‘private channels’ separate.

The other question regarding private channels is where they would appear in the UI. The ‘default’ would be as a separate view in the user profile, next to messages.

These are all just preliminary ideas. Would be keen to hear others’ thoughts on how ‘community chat’ might be implemented.

meta.discourse.org is the most natural place to test the prototype of such a chat (as we did with Babble), and the sub-community most amenable to chat in Meta is the #lounge (which I think should be expanded to include user types like serial contributors, but that’s a different topic). And all we need for that is one chatroom. I hope we can agree that this is the MVP.

Will gladly talk through these other designs on the side though!

In terms of chat ‘Channels’ one thought I have is that having an entirely separate hierarchy may be a bit confusing. I’m thinking it would be best to tie the chat channels into the existing Discourse hierarchy in some way.

Agreed. Linking to tags could get hairy though so I think “all categories” and “individual categories” would be best for starters. DropBox’s Zulip chat app has an interesting concept of “threaded group conversations”, and it’s not the scary kind of threading that we Discoursians despise: 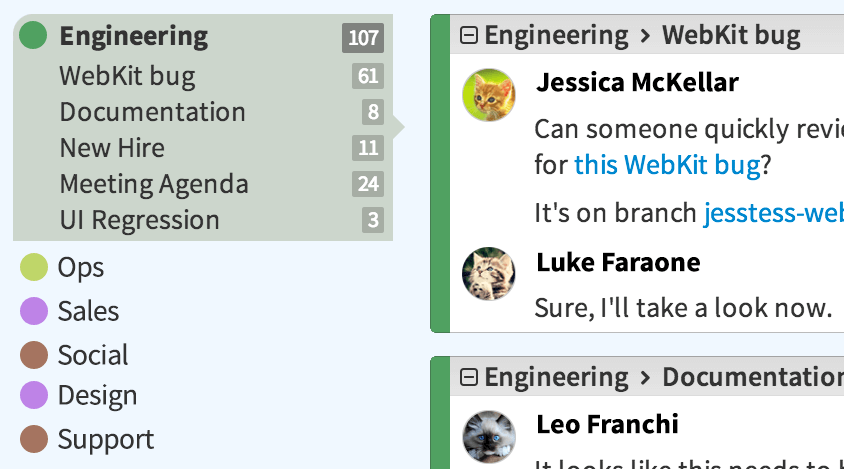 I don’t have a perfect solution in mind yet, but I definitely think this is a solvable problem. That being said, figuring out ways to incorporate tag/topic-specific discussions is “next-gen” territory as far as I’m concerned.

I’m not quite sure how channels with users or groups of users would work yet.
(…)
I think it would be best to keep ‘private messages’ and ‘private channels’ separate.

I think Facebook Messages is a great example of a chat/pm hybrid. 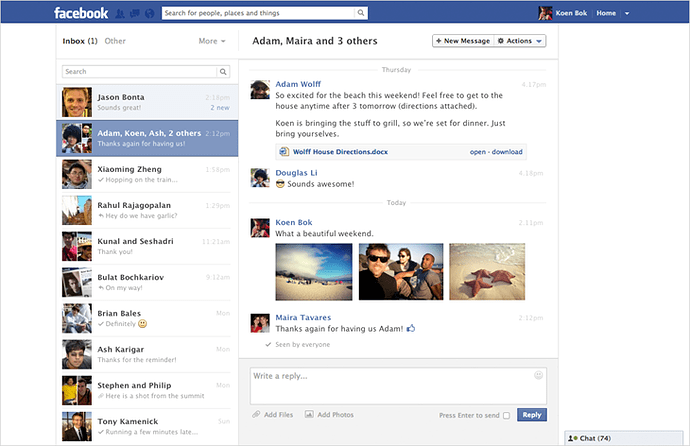 It’s always the same conversation, but in different gears. And when a user is posting a series of uninterrupted replies, maybe we could automatically merge them together.

Discourse PMs are already super powerful; they’re basically what I always wanted Google Wave to be. I’m not keen on adding a competing conversation stream into the mix. All we need is a few more “live” features built into PMs, like presence info and opt-in quick-reply.

Right, so the mvp would include the following:

I think Facebook Messages is a great example of a chat/pm hybrid.

I agree. I basically copied Facebook Messages’ approach for quick messages, however I focused on the message menu and pop-up chat-boxes. For this plugin we could start with the full page part of Facebook Messages and perhaps add the menu and pop-up chat-boxes later. In terms of the MVP I’m thinking that we should not include any private chat work.

I’ve gotten a bit of a start on this, which is up on the full-page-chat branch on the babble repo.

Here is a screenshot: (it’s not that pretty yet 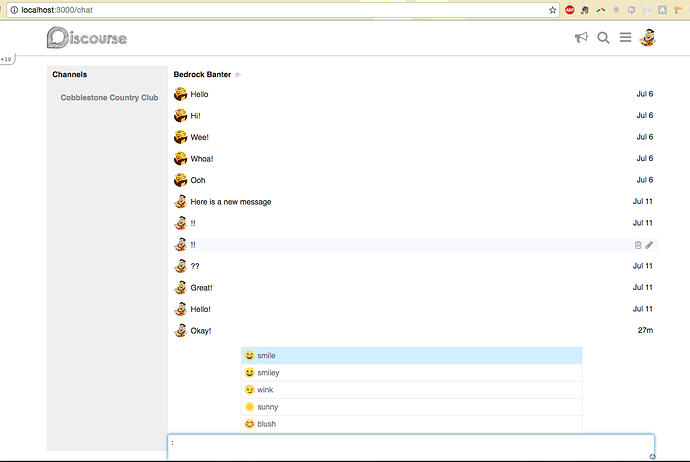 In response to the MVP prompts:

Sweet! Sorry for being absent here. I was in DC, then my dad was in NYC so I was showing him around etcetera etcetera… Will get cracking on working-in with you presently.

I’d like to test a chat on my community. People ask me about it every day!

Sorry for the delay on this folks; Angus and I are both working on other sweet Discourse things at the moment, but we’ll get back on this train soon!

@gdpelican I just pushed a new Babble branch full-page-chat-discovery to demonstrate how I’m thinking on how the frontend should work.

I think that, rather than having a completely separate view, the chat stream should exist as a sub-route of Discovery, taking advantage of the Discovery navigation, rather than using ‘channels’ per se.

I’ve also added some updates to Admin Chats to allow the selection of categories to create new chat topics in.

As you can see, this has required a few changes, which is why I’ve pushed this to a branch so we can discuss.

Here are some of the salient differences:

Concerning your remaining todos, ‘6’ and ‘7’ should be covered if we go with my suggested approach. I’ll start tackling ‘5’ (as it will be the same regardless of what approach we take) on the weekend.

Let’s finish off this structural question and your to dos first, then we can see if anything needs to be done with rate limiting and other limits. We can probably just copy these from Quick Messages.

Really excited about this. Do you think having the chat live on the bottom right of the screen where there is a lot of space would be possible?

Sweet! I have this on my list for tomorrow.

This is awesome work, thanks! Some thoughts: 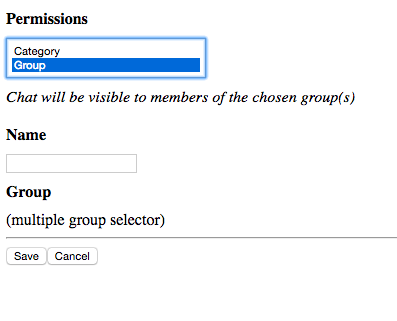 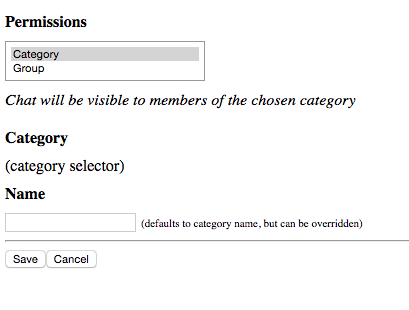 Cool. So there’d be one type of ‘create chat’, then within the view for the new chat you could set the permissions, name and groups?

Does this mean that topics won’t appear in the topics list anymore for admins?

Not by default. But there are a few ways we can exclude both I believe. I will look at this shortly.

I’m updating the chat UI itself at the moment.

Any updates coming soon? Is it safe to implement on my site yet?

Not yet. Both Angus and I have been contracted for other Discourse work over the past bit, so this hasn’t surfaced yet.

We are meeting up tomorrow for a hack day on this, so hoping to have a solid update then.

Looking forward to this guys

@angus and I had a nice time yesterday hacking on this thing; we’re getting close to a first stopping point, after which we’ll encourage folks to install it and play around a little. Here’s a gif of the existing functionality:

Having a chat in full page mode

If you really want to be on the bleeding edge, you can follow along with the following clone url:

But I couldn’t recommend throwing this onto a live instance just yet.

I approve this message

I would add that we have a basic plan for the rollout of all the features previously discussed in this thread, and even some not yet discussed, such as import from Slack.

We’ll be releasing the MVP soon.

Another interesting example of this can be found in we-hate-distractions.com which takes a topic-centric approach to group chat.

Just putting it out there for inspiration.