Three years ago we published a blog post about how Discourse and the long-form forum paradigm can co-exist with the short-form chat paradigm:

Most modern businesses and organisations today are using some kind of team chat application. The usual suspects are Slack, Microsoft Teams, Discord, Mattermost, Rocket Chat, and Matrix, to name a few.

This kind of tooling mashup works, but it has some flaws. You end up with:

One of the most upvoted HN stories of this year was a post about forums being superior to chat:

Hot take after a year or so of trying to build a developer community. If you can pick only one, use forum software rather than synchronous chat software for community building around a developer platform.

Community builders shouldn’t have to pick between the two as if they’re mutually exclusive. It’s a false duality. Ephemeral vs permanent, short-form vs long-form; these are merely different modes of communication with subtle differences in utility. They still serve the exact same purpose of communicating with people.

Get two people in a chat room together and you’ve got yourself the beginnings of a healthy community. As long as there’s some chatter on a regular basis, the room will come off as lively and inviting to other prospective participants. This is a great onboarding strategy in the early days of a community, but there is a hard limit on how far it can scale. Doing things that don’t scale can be a winning strategy for startups and burgeoning communities alike; the key is knowing when you’ve outgrown your initial growth strategy.

The bigger the community, the more you need the standard (and only) Discourse interface to date. But at the low end of users and for Day-0 upstarts, the biggest hurdle isn’t to keep the party orderly but rather just to get the party started. And we know for a fact that chat does better at these small sizes.

In other words, chat solves the “Somebody say something!” problem: 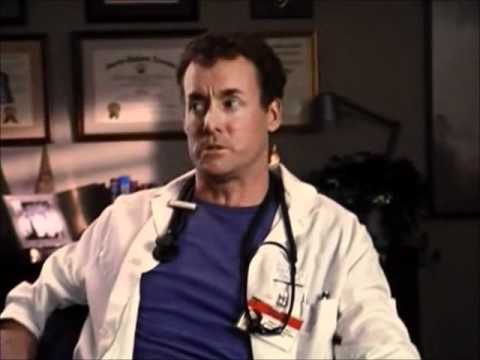 Historically we’ve been deferring to chat platforms for Day-0 communities, with relative success: At scale, most chat communities organically discover a need for a more structured counterpart to their chatty firehose, so they eventually come calling.

This has allowed us to focus on being the best tool available for discussions at scale. However, by not being the tool of choice for most greenfield communities Discourse often finds itself in the very tough position of being an additional comms tool, further down in the stack.

Moving up the stack

To address our untenable position of having to introduce Discourse to communities years deep in chat inertia, we’ve begun working on something rather radical:

Chat inside Discourse. Contribute to discourse/discourse-chat development by creating an account on GitHub. 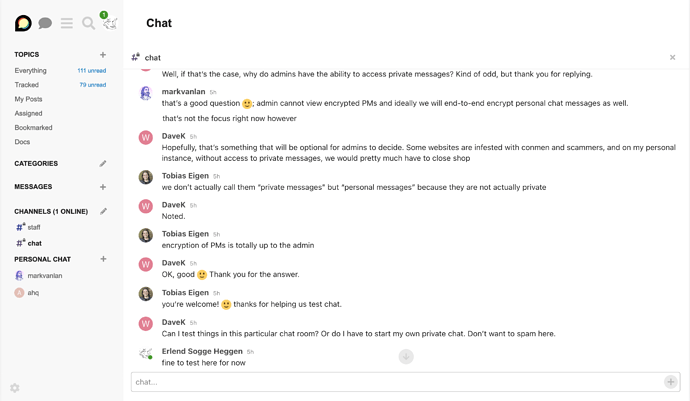 This plugin is now enabled for testing on a private category here on Meta. We will be chatting together in this closed space in much the same way that the MVP of Discourse Chat will be introduced to existing Discourse communities: Staff chat.

One of the complicating factors of communicating the long term plan for Chat is that we are inevitably targeting two separate markets:

These two verticals are largely identical; solving for one also solves for the other. Whether you’re kicking off a team project or a community, you need a good staff chat for your primary stakeholders to stay coordinated as well as socially connected.

There are currently two ways to play around with Chat:

Ooh, very nice. This is a must-have feature for my site, and I have a custom plugin to wrap Rumbletalk at the moment. Having it be part of Discourse core would be a definite plus.

This is probably getting way ahead of things, but — is there any thought of bridging?

Because while I love Discourse, the last thing I need is yet another source of instant messages. In Fedora, we’re in the midst of moving from IRC to Matrix. This would be very useful if we can bridge to matrix… and going in the wrong direction for communications fragmentation if we can’t.

Awesome decision. A game changer for adoption of Discourse.

Bridging is planned, albeit in a limited capacity. We’re looking into replicating what @merefield put together for Discord for other platforms.

Of course, the most exciting thing from my point of view would be for Discourse chat to act as a Matrix homeserver and Matrix client, rather than having a new separate protocol. But simple bridging would be okay as long as it’s relatively seamless.

Hey, just a quick question. Is this plugin a permanent overlay to Discourse, or is it just in the places you chose for it to be? That is, if you choose to install it, will your entire community change to that, or will it only change in the categories you select?

For our goat farmers and cheese makers community, my master plan long term is to move some people who spend time in Facebook for chats only over to our Discourse community.

For the professional Jai programming language developer online community I’m building from ground up, my plan is to demonstrate Discourse Chat as an alternative to Discord chat.

For some of my clients who use Slack basic features only, I already managed to move project management over to Discourse, but once this plugin becomes stable-ready-for-production, I’ll start offering it as a complete Slack replacement.

Finally, my big-dream-almost-unrealistic plan would be to convince Toptal management to abandon Slack and move onto Discourse completely. Slack sucks big time by not giving a way to organize knowledge into searchable, collectively editable, categorizable, watchable threads.

My first thought was… time to polish emoji reactions and support them officially?

I swear I’m not kidding.

time to polish emoji reactions and support them officially?

There is an official plugin similar to retort

My suggestions. I have not actually tested the plugin yet, but I find these even more important than bridging (also useful):

Search topics/posts integration
It would be interesting to add automatic searching when a user is attempting to post in chat, so when they type: Hi, I cannot find music... music post they need automatically appears as a link.

Anything encouraging others to join up or expound within a larger post appreciated.
Tag support would also allow chat integration plugin support, covering all existing Discourse bridging.

A post was merged into an existing topic: Small feature requests

if you choose to install it, will your entire community change to that, or will it only change in the categories you select?

Only the ones you select!

This is awesome! But as others suggested, having yet another source of instant messaging can be problematic. Although I love IRC, I think a better integration would be with XMPP as its federation is larger. I would not go the Matrix way, because Matrix federation is so greedy. There are good bridges between Matrix and ActivityPub and XMPP and ActivityPub being worked on.

The chat uses slug of category as name of that channel. That is not perhaps the best solution?

But as others suggested, having yet another source of instant messaging can be problematic.

For some reason, people see this Chat feature as a +1 source of instant messaging. Instead, I’d suggest to primarily see it (at this stage) as a replacement for existing instant messaging platforms that don’t give a way to organize knowledge into searchable, collectively editable, categorizable, watchable threads.

So, for example, if you’ve been using Slack basic features (mostly simple chat), you just stop using it and start using Discourse Chat – now you have -1 platform to think about and to integrate with.

Same goes for Discord and other “heavy” chats. If you only ever used it for simple stuff, you’re now better off migrating to Discourse Chat and discarding the old platform. Not only will it decease the number of platforms you use, but it will also make your chat integrate with your forum / wiki / knowledge base / documentation / project management more tightly.

Same goes for Telegram, Viber, and whatnot.

This only seems possible if you are talking about a very small group. I have Slack, Matrix, Keybase, Telegram, Signal, Google Chat, Twitter, Discord, Mattermost, and Rocketchat just to communicate with co-workers. Not to mention IRC, although Matrix bridges mostly take care of that. Oh, and Zulip. There’s probably more. And that’s not considering friends, family, hobbies. Literally all of those are for work-related communication.

Most of those are “capable” of replacing most of the others, but they do not. Instead they accumulate. 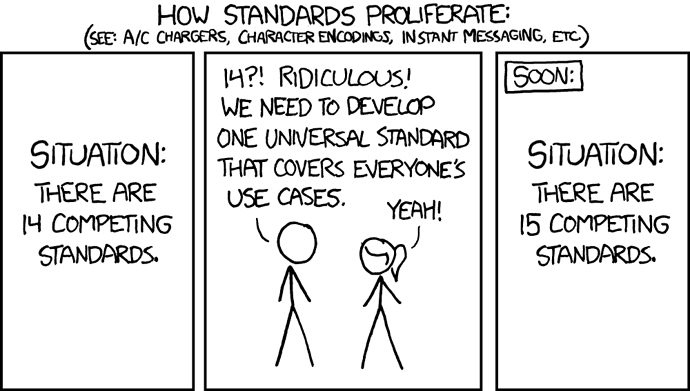 Note the parenthetical, which directly mentions instant messaging. This is why I very strongly hope any new things on the pile at least intercommunicate — and do so using an existing standard.

Don’t get me wrong — sure, try something new. But for me, the only really compelling new thing at this point would be interoperability.

All correct except that it has nothing to do with the idea I tried to convey. Maybe I failed to explain. Might try to explain in different words sometime later.

In all seriousness: I think it’s a great idea to integrate a chat into a discourse community. In our forum we ended up only using one single channel in Rocket Chat via Communiteq integration as well as for internal communication concerning one time questions which don’t have long term value.

IMHO: I think there are great chat platforms out there if there is a more complex and extensive demand in a community. Hence I would love to see a more KISS chat integration that might as well act as “Private Messages v2” and later on replace the current messages UX/UI in the long run.

I’m not fan to chats, but it is just me.

But how expensive is this? Meaning RAM, processors and storage.