Switch icons with name in the user menu

I’m unsure if this has been said before, as I just joined (i’ve used the search function). But what I’m talking about is this: 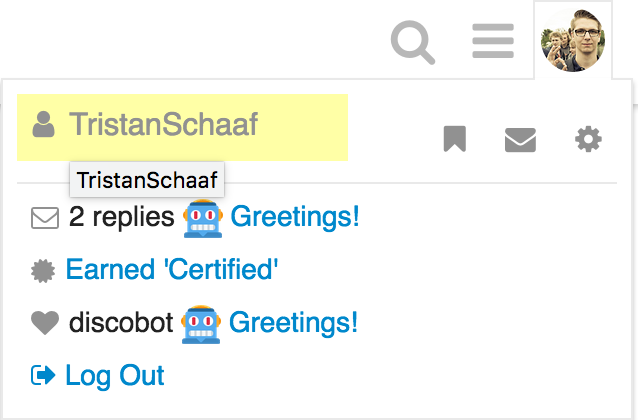 I also think they need to have some more obvious background coloring, or moved outside that menu as a whole, since the notifications take up the attention.

These are changes you can make using CSS, they should not be very difficult.

I also think they need to have some more obvious background coloring, or moved outside that menu as a whole, since the notifications take up the attention.

Where would you put the icons, what do you mean by “more obvious background”?
To understand well what you mean you should do a mockup.

Will do that later, I’m at work now so can’t dedicate that much time at it this moment.
The idea behind it is that, when having a notification, that will take up the attention of the user. Thus it won’t see the other options.
I, for some reason, have a hard time combining the “PM” and “Settings” icon under the “Notifications” tab in my mental model. I know the false user consensus is a thing, but still.

Was there any reason to hide these functions underneath a (the current) menu in the first place? Besides decluttering the top right corner?

These are changes you can make using CSS, they should not be very difficult.

I’m aware of that, but I’m talking about defaults.

under the “Notifications” tab

It’s really the “you” tab, of which “notifications” is a significant part – people talking directly to you.

That does make the reasoning behind it more sense.

I might go a bit offtopic here, but for future reference, since I do not have a community my own, nor the intention of building one. Does Discourse have a UX research team? I’m not saying they need to test this, but genuine interest. Does Discourse have the functionality of A/B testing?

I think the root of the misunderstanding is, conceptually that is the “you” tab, not the “notifications” tab. That’s why it has your picture on it… right?

I suggest spending a bit more time using Discourse, it is very odd to complain that the “you” menu has your name on it.

It was something I noticed getting it wrong several times the last week and thus worth a mention. Especially since my lack of experience with Discourse. Experienced users won’t complain about little quirks because they have come to terms with those and won’t even notice it anymore. UX testing is also done on people with little prior knowledge, so to gauge the difficulties of new users. When it comes to UX, suggesting to learn how to use a product is something you generally try to avoid.

That all is not to say I’m right and you’re wrong. I might be 1 out of a 1000 who has this issue. If that is the case, good job on getting the “you” menu right! That is what research is for.

I believe that is a no on the A/B testing?

I guess, also a no on the UX research team?

We’re industry experts in our respective areas, including UX and forum software in general. Feel free to look me up on Wikipedia if you don’t want to take my word for it.

That is not to say that we get everything right – software is an iterative process, and we design it with tons of live community input – but the core team has probably a hundred human-years of experience in the industry and in discussion / Q&A software, specifically.

I’m not saying you’re bad at what you’re doing. I’m also not disputing the skills you have in house. If anything I’m impressed with what has been achieved, regardless of skill level or reputation. I didn’t get an answer on the UX research team, so I assumed the answer was no, as it is usually the case.

Having a UX designer also doesn’t always mean you can commit to doing UX research. That’s why companies like Nielsen Norman Group, Baymard and the sorts even exist. One can learn a lot from the free articles such companies publish.

I’m just stating my mind and giving a suggestion in a community. My view of a community such as this, or Eve, is that the suggestions are filtered by the community. Good ones go in, bad ones go out. Suggestions still need to be made. If this is a “No” I don’t mind it. It’s something that caught my attention and I felt it was worth a suggestion.

I apologize, but the “I am an expert, and I have just arrived here and noticed something nobody else ever has” pattern is a bit of a trigger for me

I apologize if that was the impression given. I’m not an expert, my work experience does not allow that status, but I’m not an beginner either. I’m in the middle of my bachelor thesis. Thus the amount of research I do at this moment is quite high. I’ve seen some reliable sources that can be fitted to support my theory, this made me think the suggestion was valid.

I don’t want to question your authority, experience or skills. I much prefer to see your view on the subject and try to see the subject from another point of view. Afterward make a decision if I stand by my original point or not. Which has been shifted to a ‘Maybe?’. I don’t think my original point (shifting the icons to the left by default) can be answered without proper research.

I hope you can see that I’m not trying to come across as an expert of anything. Arguments do tend to bring that out in people, especially on the internet where incentive isn’t always communicated clearly.

Having a UX designer also doesn’t always mean you can commit to doing UX research.

I’ve been a UX practitioner for several years now. I’m one half of UXMastery.

As Jeff said, we tend to focus on feedback from our community. Research is important but most organisations don’t have the benefit of crowdsourced feedback in quite the way that we do. If your OP gets a whole lot of likes and many of those are from customers, then we’ll definitely consider your ideas.