I run an English-speaking community with a German-speaking category. Some users also want to follow what’s discussed in the parts that are not their native language and have tried to use Microsoft Translator on iOS for that.

Unfortunately, I doesn’t seem to be working at all. Is there something I can do on my side to enable Microsoft Translator to process the topic’s contents? Are there any other options available?

Have you tried proposing: ‎Google Chrome on the App Store

or even the desktop version to translate the web pages directly?

I’ve just tried it and it seems to be working fine! Thanks for the recommendation, which I’ll happily pass along.

Do you have an idea why Microsoft Translator doesn’t work? I assume it has to do with Discourse being more of a JS-based web app than a traditional web page.

The Microsoft app appears to be focussed on translating via the camera and microphone?

Apparently the Edge Browser might work too if you prefer Microsoft translation: ‎Microsoft Edge: Web Browser on the App Store (have not tried)

Microsoft Translator offers a Safari extension on iOS where you can send the current page (or the selected text) to the translation service via the Share sheet. I’ve tried it with other websites and it works quite well.

It would have been a good solution, as it doesn’t require use of another browser on iOS.

Ah interesting. Sure. Would have been more convenient. Possibly gets confused by the single page app nature of the pages, so doesn’t know when to rescan? Hard to say. Maybe it’s not compatible with the latest version of Safari?

Even better, Safari has a built-in translator. 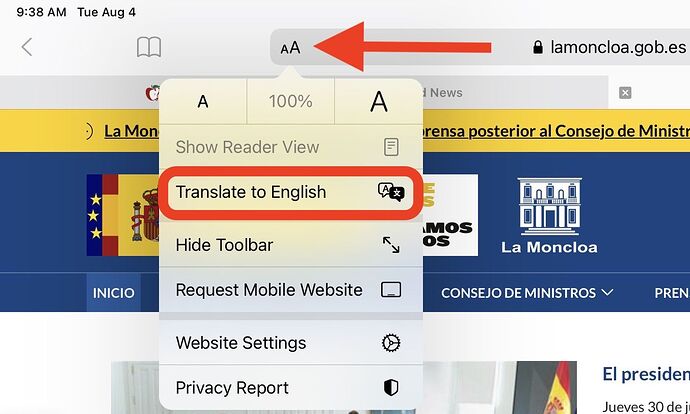 iOS 14: How to Translate Webpages in Safari on iPhone

In iOS 14, Apple introduced a Translate app that can translate several different languages in real-time, and Safari picked up new translation...

Thanks! I’ve tried the built-in translator, which would be the best option here.

From my tests, it doesn’t detect the language to translate from reliably and is offering translation to German on German-language topics or English on English-language topics. Given that it’s a fairly new feature, it probably gets better with time.