For English-speaking people, problems of this kind are not very clear. However, try, for example, to go to a German forum and understand something there without speaking German. Or on the Russian-language forum. To quickly translate from an unfamiliar language, Google Translate is used. And it is completely broken on this forum and many other forums using Discourse.

Isn’t maybe the problem that you switched Discourse interface into your own langage? In this case, the translation of the whole page doesn’t often work anymore as you have two languages mixed together (and the first one appearing is even already your own). You have to leave the Discourse parameters on the same foreign language as the forum posts, so that everything is in the foreign language on the page. Translation should work from there.

I just checked on a couple of foreign Discourse, and it’s working for me.
Please provide links of the forums you don’t manage to translate if the above doesn’t solve your problem.

Isn’t maybe the problem that you switched Discourse interface into your own langage?

No, this is definitely not a language confusion problem. Google translate has long been able to properly separate and translate this.
In my case, I checked it without even logging into the forum. In this case, only 1 language is used in the interface and content. And my interface language here is English.

Please provide links of the forums you don’t manage to translate if the above doesn’t solve your problem.

One could blame the problems on unstable work
Google Translator API, but the inability to translate many Discourse sites for a long time suggests otherwise. 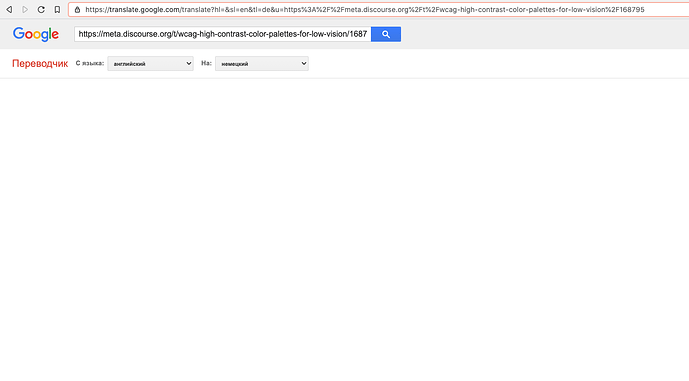 Isn’t maybe the problem that you switched Discourse interface into your own langage?

An interesting fact, if I am not logged into the forum, then the interface is shown to me in my system language and I cannot change it until I enter the forum under my account. If the problem of mixing languages really exists, then this behavior is also erroneous.

I do believe the mixing languages problem exists (only my own impression). Sometimes, on my end, it even causes to not have the translation available at all (as the browser thinks it’s already in my language). Maybe sometimes (often?) it still works, but I guess sometimes it doesn’t.

I have myself also had some troubles in the past where Chrome says the page can’t be translated when I try the first time. But when I try it again just a few seconds later, it then works. I didn’t pay much attention to it, I got used to the fact I often have to ask a second time for it to work. I don’t think this is related to Discourse in any way. It does it whatever the website (Discourse or not).

I tried these 2 sites from English to French on a French Chrome, and it works exactly like you would expect. No problem. I’m not sure there is any kind of global problem here. Maybe on your browser side or some Google limitations on the IP you’re accessing from or something like that? You should try to test more, I am not witnessing what you describe, personally.

Yes, I will definitely check more points now. I don’t like the unpredictability of Google Translate in Chrome on Discourse sites.

I found a solution to the problem with Chrome’s built-in translator so I removed that from the first post. The problem was on my side in the firewall rule. This greatly confused me with inconsistent manifestations.

At the moment, I can say that the official google translate plugin cannot translate this forum, but forum.ghost.org does translate without problems. Perhaps the matter is in what forum settings or styles.

PS I will try to check more sites on Discourse to understand when there is a problem.

I have not checked the entire list, but it is obvious that only a small part of these forums can be easily translated if the visitor has a Chromium browser installed (for example Brave) with the official google translate plugin. I have no doubt that some of the blame lies with this plugin, but it is absolutely useless to point google about this. A critical issue with the plugin only occurs with the Discourse engine (most Discourse forums, but not all) and discussions.apple.com forums.

Yes, you will need to report that to the plugin.

Until Google answers me, and I think this will never happen, it might be worth looking at why most Discourse sites have this problem and some don’t. After all, if a bug is in the Chrome browser and it only appears on your site, it is silly to hope that it will be fixed in Chrome. It’s the same here. Problem only on most Discourse sites and Apple forums.

After all, if a bug is in the Chrome browser and it only appears on your site

Your own research has already disproven this; for some Discourse sites it works, and others it does not. Therefore the problem is not Discourse.

Your own research has already disproven this; for some Discourse sites it works, and others it does not.

I cannot yet draw such a conclusion based on all the data collected. After all, this plugin has no problems with any other forum and site engines (even those with a lot of JavaScript, for example NodeBB). I can only 100% say that Google will not solve this problem, even if it is on their side.

You still have a choice: to help users (these are all visitors to thousands of Discourse forums, not just the local community) who use Chromium for a number of reasons, or leave it as it is (users’ problems are their problems).