My forum has forgotten my sidebar categories! On mobile they still appear, but on desktop it’s back to the “You have not added any categories” stage.

Update: I went to the mobile, clicked the pencil beside “Categories”, and clicked “Save changes”, and now the categories appear on desktop again.

Not sure if it was put for some specific reason (but I think it was a mistake).

In the CSS code of the sidebar:

There is a padding-left: 0 that is not needed, it should remain 10px, so it must be removed.

I don’t see that on iPad/Hub.

You have to open the menu, then you should be able to see this little bug.

Now I understand what you ment :

Yes, you are right. But… matter of taste. I like it more as it is now. Then all components are nicely aligned.

For the Sidebar, I think the following options are needed:

This would also be nice to have (but not having it wouldn’t prevent me from turning on this new feature):

Edit: The new user/notifications menu (the other half of this change) is great and helps keep track of differnet notification types really well.

But I think it has made one old flaw a little bit worse: It’s really hard to find the user’s settings page. It has been for a while as it’s just another unlabeled icon in a row (now column) of icons in a menu which looks like it’s about notifications rather than settings.

Including it in the sidebar might be the solution, as it could have a label.

Show categories in the proper order.

The categories list is alphabetical. Discourse categories have a specified order explicitly set by the admins, but the sidebar currently ignores that and makes quite a jumble of things.

Try out the new sidebar and notification menus! announcements

We initially had it implemented this way but found it even more problematic in earlier testing. Part of the problem is that the UI for choosing things doesn’t allow you to easily reorder them. At some point, custom ordering may be on the table, but we need a better UX for that if we want to support it. For now, alphabetical felt like the better tradeoff. I’m not sure I understand this one. Can you clarify what you mean by “causing a bit of confusion on the top side of the screen?”

But like others, I agree that by default the categories should be listed in the same order as on the forum overall. It’s a little bit of a deterrent for me as it focuses my attention -my eyes always go up the list…- on categories that I don’t prioritize, or aren’t prioritized by the forum (through admin settings or activity).

Seconding this.
Also because my own use of tags on one of my forums is customized (tags and inputs are hidden overall except for 1 category

After using it a bit, I still don’t have a definitive opinion. Plus things are changing. A few things bother me.
But I looked at the old hamburger menu on my forum and… I realized that the only purpose I had for it was to click the admin button. I almost forgot that it had other options in it, my brain simply ignored them for a long time.
In the current state, I can say that the new menu seems a real improvement.

Part of the problem is that the UI for choosing things doesn’t allow you to easily reorder them. At some point, custom ordering may be on the table, but we need a better UX for that if we want to support it. For now, alphabetical felt like the better tradeoff.

I saw this earlier but I think the tradeoff is bad. And there already is a UI for choosing the order of categories: It’s part of the category definitions themselves, and already used to determine the order they appear on the Categories page.

The sidebar configuration UI just needs to let us choose which categories appear. The order is already defined elsewhere, and shouldn’t be alphabetical (unless that’s the order the admin chose for categories on the site, of course :)).

The order is already defined elsewhere, and shouldn’t be alphabetical (unless that’s the order the admin chose for categories on the site, of course :))

I’m not advocating for any particular option but there is an argument to be made that the sidebar and the categories page are very different contexts and something which is appropriate for one may not be for the other.

Specifically, the categories page can contain a lot more detail about the categories which may take up significantly more vertical space. This makes it very pertinent to bring the most important categories to the top, making them immediately visible.

In the sidebar, this is less of a limitation and so it may (no idea) be more natural and easier to find categories at a glance in alphabetical order.

I don’t feel particularly strongly about alphabetical vs. custom order but for that reason, I do think that tying a custom order of the categories together would be wrong. At least forced together, defaulting to the same order would be fine but I suspect that would over-complicate the UI for it.

So the hamburger menu on my instance has some key additional links that we added, that we most definitely wouldn’t want hidden away behind an extra menu.

We also have the theme selectable from in there, so ideally those will also be always visible, and worst case behind an explicit ‘theme’ menu. Most definitely not hidden behind some generic menu.

Next, we have our categories in a deliberately chosen order, both top-level categories and the sub-categories, so I would want them to show like that by default before I’d turn this on.

And lastly, we don’t use tags at all, so we’ll definitely not want tags shown whatsoever.

Oh, actually, one more thing. I didn’t notice the new location of the hamburger at all until it was pointed out in this thread. So I think it would be good for existing users to have some bit of UI that displays the first time someone visits the site after the new hamburger is enabled, highlighting the change. If I have to I could add a banner notice in for a while, but it really shouldn’t be needed.

The admin settings looks a bit confusing to me. With the 2.9.0.beta10 update the option ‘Enables experimental sidebar’ was already checked, but without enable experimental sidebar hamburger being enabled, this makes no difference to the old situation. I don’t get a warning when I enable enable sidebar alone.

And why is a new notifications menu dependent on enable experimental sidebar hamburger?

Anyway, I like what I see with both settings enabled. It will probably help new users more than experienced Discourse users.

A minor detail: here on meta all tabs in the notification menu have ‘mouse-over balloons’. I think that is the “title” in the <button> element. In our Dutch language instance some are missing. Could be a translation thing.

Should the new menu font size be slightly larger?

I’m not sure how and if it scales with resolution and/or screen size, but the new hamburger text font size is a bit tiny for me (32", 1440p). 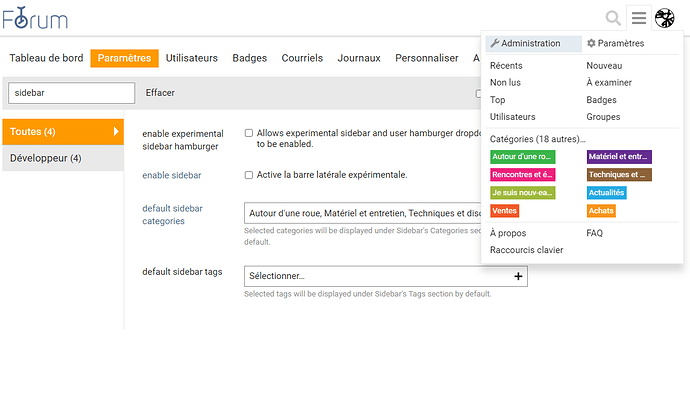 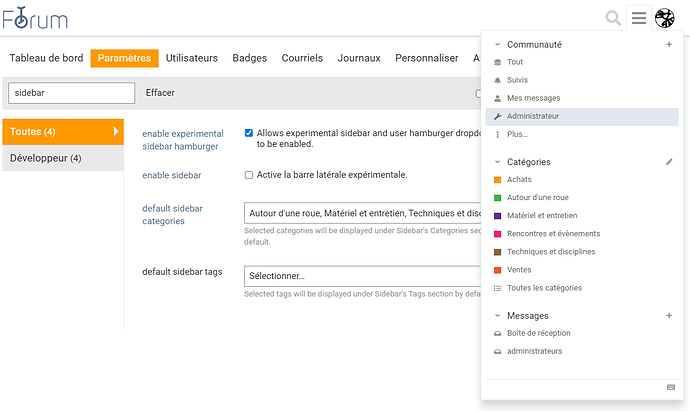 The regular font size on my forum (it’s the default one with Roboto): 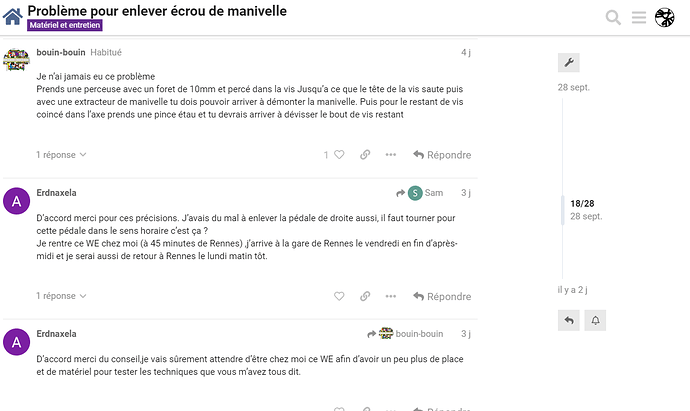 This fixes not being able to exit mobile view in the Discourse mobile app.

This makes the Sidebar less obvious when open… 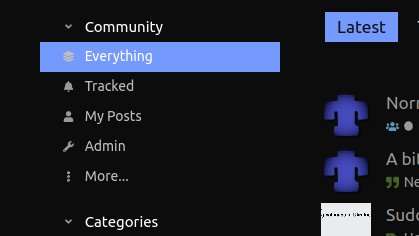 They’re currently experimental and are tucked away behind a couple of admin settings. If you don’t enable them for your site then you’ll have the same setup as before.

These features can be enabled by admins on all communities with experimental site settings that any admins for any community can turn on and are now enabled on Meta.

And after timeframe X there is no settings and old one is bye gone. Then the same shock effect hits again. So because we can’t avoid that increased huge amount of icons perhaps better solution is start using it right away?

I suppose that would be a decision for you and your community, but it’s still experimental at the minute and likely to be tweaked here and there. You may want to hold off until it’s closer to its ‘finished’ form?

Sure. And still the shock is there. You know a way better than me ever, but the consept is ready and the issue here is not if review link is visible or do we get tooltips here, there and everywhere. 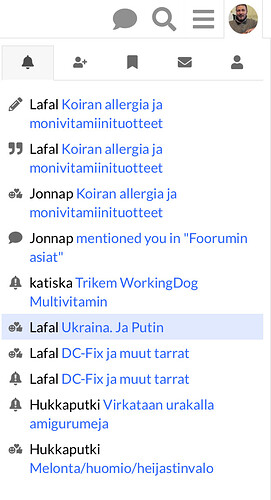 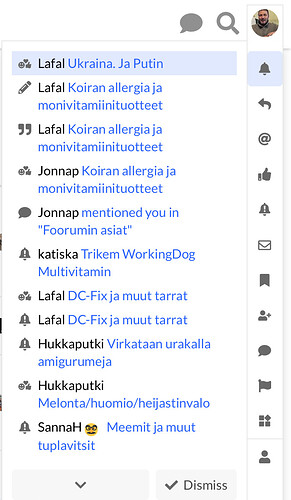 Well, I promise that was the last time I’m complaing about that.

My point stays. It just doesn’t matter if the new one is called as experimental. It just means there can and will be bugs and improvements. But it will come and the transition to new system is front of us and that transition should do now. Not next month or next year.

One strong point is that is the only way to get ideas from basic users. Those are majority of users, not power users.

I bet it won’t be long until there’s a theme component to remove the unnecessary/extra icons, or a plugin to put them back in the old place.