Maybe just remove the "Community" header in the sidebar? (A plea!)

Continuing the discussion from Try out the new sidebar and notification menus!:

Has there been any consideration of something other than COMMUNITY for the catch-all top-level menu item? I am a little sensitive to use of this word, and I know this comes a little like a mix of windmill-tilting and bikeshed painting, but… I think it would be better to use something else. If that section is “community”, why aren’t messages “community”? And here, there is a category named community, so that’s even more weird. And then Docs and FAQ are “community”?

This is still troubling me. I know it’s hard to come up with a good catch-all title, but using “community” feels a bit like “eh, that word is already basically meaningless due to overuse and misuse, so it’ll do”. Which is actually kind of distressing to me. I know I can change it on my own sites, but it’s going to cause me pain everywhere else in the world I encounter it.

I think, though, with the current menu, where the section shows just “Everything”, “My Posts” , and “⋮ More” , it works fine to have no label. Collapsing / condensing is already handled by More, so there’s not really a need for that. And as I think is already clear, there’s not really any consistency to what’s included so it’s not a meaningful grouping.

This also could solve the other oddity — the

for New Topic hanging off the “Community” header. Instead, that could just be replaced by “+ New Topic…”. Same overall space as now, and the new topic link is now clear, and also I won’t be so very sad.

Basically you want ability to change texts per user?

Anyway — I feel you, someway anyway. Community is more or less just another hype. Sorry, but I’m not part of some special community just because I’m admining a discourse-forum

I’m member in one forum, that’s it.

Some hockey or football enthuasists can build a community, sure.

But… should texts change world wide? No. I don’t value badges either but I don’t mind those here, there and everywhere.

Basically you want ability to change texts per user?

Sorry, possibly some of my attempts at humor are not translating. I strongly believe that removing this text by default is the right thing.

I think it is a bit of a misnomer for the items that get bundled in there. Have you got a preference for what it could be changed to?

A picture may be worth a thousand words… 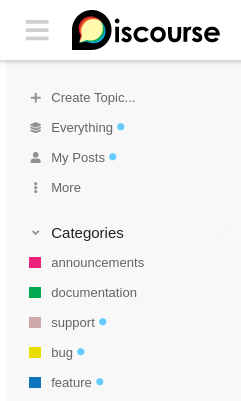 I glossed over the ‘no label’ bit in my response (we have two Community Moderators now, so I only have to read half the posts

). I was thinking for keeping the collapsible bit, but I suppose that’s not set in stone either.

If keeping something collapsible is crucial, one possibility might be “Shortcuts”. That would make most sense if everything there were individually configurable, though.

Personally, I don’t think that small amount of collapsing adds that much. If it’s important enough to be at the top of the menu, it’s important enough to be top-level. Or, move the whole section to the bottom, where it doesn’t really matter how much space it takes. (“More” as the very last item on the whole menu does feel a bit more “right”, anyway.)

I like this, personally. At the same time, I’m not bothered by the current implementation. Maybe there is some reason why we created it as collapsible.

I like this suggestion! IMHO, the items under the Community header are the core menu items. I find the Community header to be superfluous and would prefer it if it was removed—leaving more real estate on the sidebar for other items. Having said that, at least for me, this is a minor gripe. If removing that header is more complicated than it sounds, perhaps that energy would be better spent elsewhere

I think the current setup works great for everything else (e.g., Categories, Tags, etc.).

This also could solve the other oddity — the

for New Topic hanging off the “Community” header.

Oh wow, only now I realized this button exists
I don’t understand why I need to collapse the menu and your version looks more reasonable.

I like your suggestion very much, but it would then have a different design than the new message button in the sidebar:

They both do the same exact thing at the core, so I think they should share a very similar design.

They both do the same exact thing at the core, so I think they should share a very similar design.

Yeah, I think I would put “New Message” there as a list item. Alternately, the + could move down to next to Inbox —this would also improve consistency, as the icon (if any) by all headings would be the pencil for “edit this section”.

(Personal chat is a little different — arguably that could have both a + for “add new chat” and a pencil to edit which chats are pinned to the sidebar.)