After installation, users posting unformatted code will see a warning message instructing them how to format it correctly.

Sensitivity and whether it detects HTML are configurable via theme settings.

If you receive a warning for a post which doesn’t include any text, you can print debug information by opening the browser JS console, and typing debugUnformattedCodeDetector() Enter. This will print some information about which lines were considered ‘code’, and what the sensitivity settings are.

This is quite essential to our forum due to the fact that many new users ignore our topic about code formatting and most of our topics are about assistance in code. It makes our life much easier by informing them of informatted code. Thanks @lionel-rowe

v0.5 is now out. I’m gonna start documenting changes properly on this topic. I expect most updates from now will be dealing with edge cases.

This is great, thanks for sharing!

Will this recognize logs as “code”? If not consider this a feature request.

How do you identify an extract from a log-file? I guess it would suffice to look for a date/time at the beginning of two consecutive lines.

Another question: will ir work when people are using quote-formating (>) instead of code fences?

Will this recognize logs as “code”?

It will recognize logs as code if they happen to “look like” code (i.e. contain any of the patterns that would flag a post as containing code). You can test it out on your content at the demo link.

There are lots of ways to format a datetime, and not all log formats start each line with a datetime in any case. I guess detecting full ISO8601 representations (1970-01-01T00:00:00+00:00 etc.) would work, as these are very unlikely to appear outside of code or logs.

will ir work when people are using quote-formating (>) instead of code fences?

Anything in code blocks (fenced or indented) is ignored. Quoted blocks don’t receive any special treatment. Quoted blocks aren’t a correct way to format code, and may lead to unexpected results.

Block quoted (gets parsed away into oblivion):

Quoted blocks aren’t a correct way to format code, and may lead to unexpected results

That’s exactly why I think it shouldn’t be ignored. People keep using quotes to “format” their code…

We at the Home Assistant forums think that this is the best thing invented since sliced bread. Or maybe Home Assistant. Thank you so so much @lionel-rowe!!!

I don’t want to allow users to skip formatting or disable the dialog in the future. I want them to feel pain until they change their ways. I’m sadistic like that. Can you make the “Don’t show this message again” and “Post anyway” buttons optional? For now I’ve hid them with some CSS but would be better to just not include the HTML at all.

I wouldn’t recommend hiding them, especially if you leave the setting to include HTML detection on. Power users may still want to have their (sanitized) HTML parsed as such, not formatted as code. Two examples where this can be useful are kbd and abbr tags.

If you exclude HTML tags from detection (which may be viable depending on the scope of your forum), hiding the “don’t show this again” would probably be OK. I still wouldn’t recommend hiding the “post anyway”, though, because there are bound to still be some edge cases of false positives (I hit one the other day where I’d omitted a space before an opening parenthesis — poor typesetting, but not unformatted code). Then you’ll have a situation where users can’t post their question at all, and, unless they report the issue to you directly, you won’t even know about it.

Unsure if you are doing language detection or not, but if you are, can you add the estimated language name after the first code fence so that users will properly syntax highlight too?

Language detection is beyond the scope of this component, I’m afraid. Where possible, it looks for syntactical features shared by many languages, such as lines ending in semicolons, certain configurations of curly braces, and so on.

I am thinking about ways to enhance the UX, though. One big improvement would be to make it much more interactive. For example, instead of a simple modal, the user would be presented with a wizard that first asks them which language their post concerns (select from a dropdown), then a screen which asks them to select which ranges of their post are code (defaulting to lines that contain strings flagged by the plugin), then generating the appropriate markdown. This would still include a “skip and post anyway” option, though, for the reasons I mentioned.

I don’t have a timeline for this change, but it’d be good to know if it’s something people would be interested in.

Already hit the edge cases issue within 30 minutes or so of hiding the elements, so they have been re-added.

I would be super interested in the modal being more interactive!

Quick note, we will be official-izing this component soon and working closely with @lionel-rowe and @david to get there. Any ideas or feedback, now is the time to share it!

I tried posting the following:

Then I got a popup saying the post might contain code. I was curious, so I clicked the “Fix Code” button, but nothing actually happened. It’s not like the post even has anything resembling code anyway. So something seems a bit off on this.

(In fact, trying to post this topic made the same popup appear.) 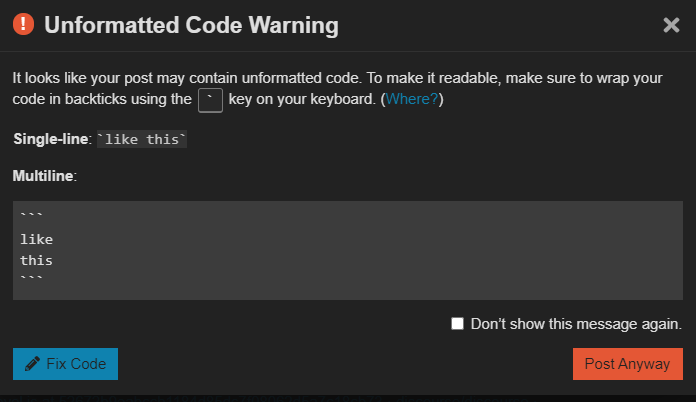 Thanks @seanblue, we made a couple of tweaks based on this feedback. Emojis are now ignored:

And we also changed the “Fix Code” button to say “Edit Post”. The idea is that you should go back and manually fix your post - it will never be fixed automatically.

Quick note, we will be official-izing this component soon and working closely with @lionel-rowe and @david to get there. Any ideas or feedback, now is the time to share it!

Not sure if it makes sense, but would be great if this could also alert on most common Markdown mistakes, that break the formatting.

It would also be great if there was a hint where the suspected unformatted code is.

I was just writing another reply and got the alert, although I haven’t pasted any code. After a while I realized it’s because I used the word topic_id… But it’s not obvious that the detector thinks this word is code (and most people wouldn’t think that) IMO.

I think that when a word has an underscore in it that doesn’t necessarily mean it’s code.

Thanks for all your feedback so far folks! We’ll be adding and tweaking a few settings to reduce the oversensitivity of detection.

@tpetrov one other thing — does the wording of the popup make it clear that you can choose to ignore it and post anyway if you don’t think your post contains code? Or does it make it seem like you’re forced to find and “fix” the perceived problem?

My concern is that a lot of people will not read through it…
You know, when people see a popup with more than one sentence text nowadays, they seem to ignore the text and look for the button Ok (I accept cookies, terms, etc,).

Still, maybe “It looks like your post may contain unformatted code” could be changed to “Do you use code in your post?”, as sometimes questions draw more attention.

I’m not a UX expert, but this button seems a bit nuclear:

- something I wouldn’t like to click. Which of course is the idea - that people will not simply skip it instead of trying to format their post better.

Oooh, I like this idea… but I just got a false positive:

It’s still early for our relatively small site but this is looking promising. In the month prior to changing this, 18 folks did that tutorial step and 4 flagged it wrong. In the month+ since 17 have done that step and 0 got it wrong. The new text adds a few more details about why you might flag a post but I’m guessing it’s the very small change to the final sentence that’s doing most of the work: We like our discussions friendly, and we need your help to keep things civilized. If you see a…

It might have been the broken links that tripped it up? They’re just taken from the templating engine and look like: [keep things civilized](%{guidelines_url}). Or maybe the HTML img tag?

Still, maybe “It looks like your post may contain unformatted code” could be changed to “Do you use code in your post?”, as sometimes questions draw more attention.

Not a bad idea, @david perhaps we can try changing the modal title to “Are you posting a code snippet?”

I’m not a UX expert, but this button seems a bit nuclear:

- something I wouldn’t like to click. Which of course is the idea - that people will not simply skip it instead of trying to format their post better.

I think you’re probably right. Next version will have that as a standard gray button.

It might have been the broken links that tripped it up? They’re just taken from the templating engine and look like: [keep things civilized](%{guidelines_url}) . Or maybe the HTML img tag?

Turns out it was both! Next version with default settings will no longer trigger for this post.

We’re rolling out new copy, and building a corpus of positive and negative test sample posts for the component. Bear with us, as this is shaping up nicely!