Update has stuck, what shall I do?

It’s been 30+ minutes already, and updates on my server never take so long. What should I do?

Apparently, in the very beginning of the update log there is a warning:
Warning: the running version of Bundler (1.14.4) is older than the version that created the lockfile (1.14.6). We suggest you upgrade to the latest version of Bundler by running gem install bundler - but I didn’t notice it at first since the update proceeded without interruption.

p.s. prior to that I’ve updated docker manager to 97c3b03 - the update has stuck once (it has been cleaning temp files and then got killed) - I’ve restarted it, and it succeeded. Docker_manager is now ‘Up to date’. Could it have somehow affected the Discourse update process?

I’ve navigated away from the update page, and now the log doesn’t show anything at all:

The status is as following: 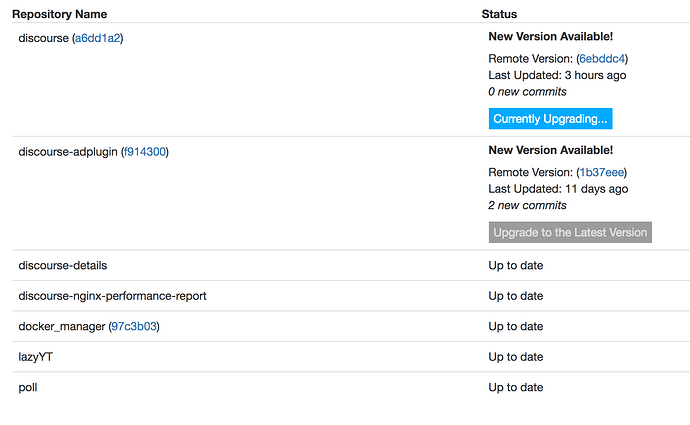 You might have run out of ram during the upgrade. If your system is up and you think it’s not still rebuilding you can click that ominious sounding “Make it stop” button (I can’t remember the actual words).

If all else fails, you can ssh in to your host (or use Digital Ocean’s console if you use Windows and don’t have a terminal) and

Thank you, Jay! I’ve clicked the scary red button and status went from “Currently updating” to “Up to date”, but suspiciously swiftly, which made me decide to run ./launcher rebuild app. Everything went well, my forum is up, running and up to date, for real this time.

For future reference, is it better to update using ./launcher rebuild app rather then from the admin panel?

p.s. and yes, it might have been the ram issue, after all (a spike before app rebuild) 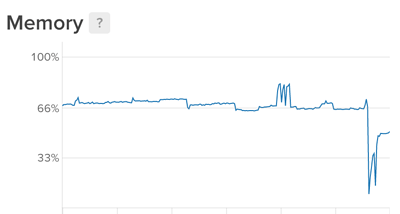