Almost down to 200kb with Brotli factored in – and unless you are on an Apple device, you benefit from Brotli.

Post History and viewing raw email is broken on 2.10

Is this the way it should look at mobile? 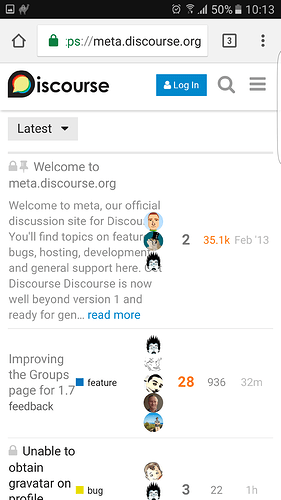 Also at other views, it doesn’t look correct. Sorry, I can only post 1 image as new user.

We’re aware of that though (cf. @sam’s post right above yours)

Summary: Set up advertisements on Discourse

IF YOU ARE RUNNING AN AD BLOCKER RIGHT NOW YOU WILL HAVE A VERY BAD TIME TRYING TO SET THIS UP! TURN IT OFF BEFORE PROCEEDING DOWN THIS PATH! You’ve been warned.

This is the officially supported Discourse ad plugin. Install and configure it to start serving ads on your Discourse forum. The plu…

For some probably unrelated reason, I’m also unable to edit that topic.

Unrelated. Occasionally edits to posts with links will generate a 500 error, but editing again causes it to work. I’ve run into it several times myself, here and on other Discourse instances. There is another topic on this.

The links overflowing summary is also unrelated, @sam broke that awhile back with a CSS change.

Ok, Ember 2.10 will be merged into master tomorrow after we increment version. Expect a few bugs…

I don’t have a user card background and yet my user card is huge and whitespace-y.

I remember the top half of the avatar was “floating” before.

I don’t have a user card background and yet my user card is huge and whitespace-y.

I noticed this a while back, just after the user card moved to using a component

Hmmm does anyone recognize the CSS mistake that is happening that’s causing this? Is there supposed to be an extra class or something?

edit: I think I found it

This should fix it:

If a topic has no tag and no category, then the title isn’t vertically centered when scrolling down

Seems like another unrelated bug to Ember, but I fixed anyway:

I’m happy to report that as of an hour ago or so, Ember 2.10 has been merged into Discourse! Keep reporting bugs as you find them please.

After upgrading to the latest Version, using git pull and rebuild app, it still says my installation is outdated. No errors or anything in the Logfile. No Update if I click on the notification.

I’m not not not sure I can keep up. When will the inclusion of ember-2.10 be stabilised on master?

It has been a terrible situation, I’m sorry. We are having some operations issues that required us to roll it back a few times. Since it’s the weekend and I have to go away I imagine I’ll merge it back in on Monday, and then we’ll keep it for good.