URLs being dropped from Thunderbird-generated replies

To be make my previous question a bit more precise, is it a bug on Thunderbird’s part that it puts class="moz-txt-link-freetext into hyperlinks in emails that it sends? Is it a bug on Discourse’s part that the presence of such a tag causes the <a>...</a>-enclosed URL to be dropped from the body of the message and subsequent <br> tags to be ignored?

Hi @Falco and @riking — Sorry to bug you, but since you’d looked at this issue previously: do you have any thoughts on my questions in the previous post about whether this is buggy behavior on the part of Thunderbird and/or Discourse? Thanks.

I tracked the problem down to extract_from_mozilla(doc) in lib/email/receiver.rb and made a simple fix which I’ve put in a PR https://github.com/discourse/discourse/pull/13176 .

I haven’t had time to write tests so the PR might not get accepted but feel free to use it (although be aware it’ll probably be wiped out by any upgrade unless the PR is accepted).

I’ve only tested on imported mboxes but I think it should work on newly received email.
Unfortunately I don’t think it will apply during a rebake (it didn’t for me) so might be pretty hard to apply retrospectively.

@BradCray, for info the PR won’t be accepted without tests and it’ll be some time before I get a change to look into doing that.

Thanks for the attempt at fixing this and update, @bsoares! Maybe your PR will inspire someone else who’s already familiar with discourse testing to pick up the testing aspect if you can’t get to it sooner (?). I tend to be a little surprised that this issue hasn’t generated more interest or concern, as my impression is that Thunderbird is a reasonably popular email client (though admittedly, I don’t use it myself).

Thanks for the comments @BradCray . Hopefully I’ll find time – work has said I can spend some time on it but it probably won’t be for a couple of weeks at least. I’m also surprised there isn’t more mention of this, as you say Thunderbird is a popular email client. We’re just switching to discourse and I’ve been playing with importing mailman mboxes, my colleague noticed the problem more or less straight away! Took a bit to diagnose because there’s nothing wrong with the Thunderbird emails, just an overzealous sig/reply hider in lib/email/receiver.rb!

@BradCray (and anyone else after a fix for this), I’m not going to have time to get a proper PR with tests any time soon, so what I have put in place for out discourse is a patch which should continue to work so long as the method in question doesn’t get changed (in which case I hope it gets fixed!).

)
and then put the following in containers/app.yml in the hooks: after_code: section (after the plugins if you have any):

This assumes you have /var/discourse/shared/standalone mapped to /shared in the volumes: section, so adjust to suit your environment.

You’ll need to rebuild the container with ./launcher rebuild app but you should retain the fix whenever you rebuild. Not sure if a web-admin induced update would apply it though.

[The attachment has extension .txt so it can be attached to this comment, you may want to get rid of it in the filename and the config]

I have the problem too. Therefore I would like to try the solution/workaround with the patch file. Unfortunately, the attachment lib_email_receiver_rb-thunderbird_links.patch was not uploaded correctly. Could you please resend it? Maybe simply as a code block?

Hi, I’ve attached the file again (with a ‘.txt’ added for upload reasons), and here’s the content anyway:

To fix a typo I’ve just spotted in my earlier post, to use this patch save this patch file in ~/lib_email_receiver_rb-thunderbird_links.patch.txt and then

and then edit containers/app.yml as described above.

Thanks, works like a charm, except for the case of links with alias (like this one for example), which get separated …

@Flominator Glad it’s at least partly working! I’d be keen to adapt the mozfilter part to not discard a link with alias. I hadn’t come across one like this, and haven’t been able to find documentation on thunderbird’s link classes. It’s not overly fancy though so it might not cope!
Would you be able to post or message me the HTML source in the email that created the post to have a look at? Thanks!

Hmmm, in that example, and in the full email source you messaged me (thank you!) the moz-do-not-send attribute should not affect the display of the <img> or <a> tags that that attribute appears in. The mozfilter is only looking at values in the class attribute, and I can’t immediately see anywhere else that it might get filtered.

As such I can’t work out why the link-with-alias’s content and href get separated out, unless for some reason the discourse importer is suddenly deciding to use the plain/text part of the Mime encoded email (which does have the text and URL separated). Why it would do that I don’t know.

Then the picture which in the mail in between the text (left) turns to be at the end in Discourse (right):

I’m still thinking this might be discourse using the other mime parts (in this case a plain/text part followed by an image/… part of the email to create its markdown version, though why I don’t know. Perhaps an HTML validator is rejecting the text/html part because of strictly-non-validating attributes like moz-do-not-send!?
Could you do one more test, with the same post (some text with an image in the middle, but also make some (but not all) of the text bold, even just one work. I think that will determine if the text part is coming from a text/plain or text/html block.

And sorry to ask, but just to make sure, you have incoming_email_prefer_html set to true (checked)?!

Could you do one more test, with the same post 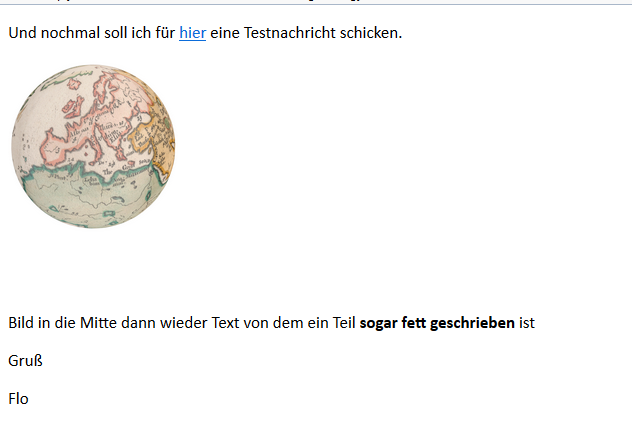 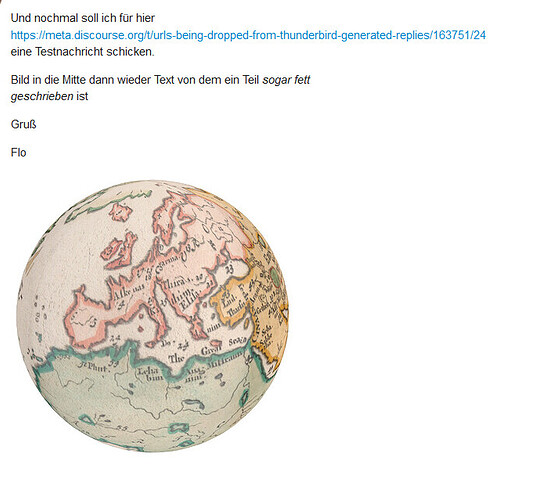 Thanks @Flominator . I see that the emboldened text has become italicised, so it’s definitely not using the HTML directly, but it is picking up on the emphasis somehow. I wonder if the text/plain part of the email gets some kind of markup/down added – would you be able to PM me the email source like last time?

Hi @Flominator , thanks for the raw email. Looking at the text/plain alternative part of the email does indeed put asterisks around the text that’s in bold in the text/html part. Most markdown renderers (such as the one in discourse) interpret this as italicised. Here’s the text/plain segment copied and pasted on its own:

which looks identical to your screenshot.

So what I think is happening is that the text/html segment is being rejected as invalid HTML (probably down to the non-standard moz-do-not-send attribute name in the a tags). This will require the patch to change how valid HTML is checked (possibly just removing those attributes) and I’m less confident how stable that will be without it going into the core code. I’ll have a look when I get some time.

Hi all following this topic,

This means that the patch attached in an above comment will fail (probably not “spectacularly” but it might then require a rebuild to get upgrades going again) when you upgrade to include this new commit (probably your next upgrade).
If you have it automatically being applied (e.g. with a git apply cmd in your app.yml as described above), you should remove that before your next upgrade. In fact a rebuild might be in order as that commit might fail to apply since the place in receiver.rb where it will want to apply the commit diff has already been changed by the patch.

I’m going to 1) remove the git apply cmd from app.yml, 2) rebuild app, 3) update (if it hasn’t already in the rebuild). I’ll let you know how that goes…

In the end I did the following instead because it doesn’t require any downtime during the rebuild.

I’m the author of this patch. It works great for me, and I found no drawbacks.