Anyone migrated to version 3 of Microsoft Translator API yet?

I’m using the translator plugin with Microsoft Translator. Recently, I received a notice from Microsoft informing me that I need to migrate to the latest version of their API before the end of April: 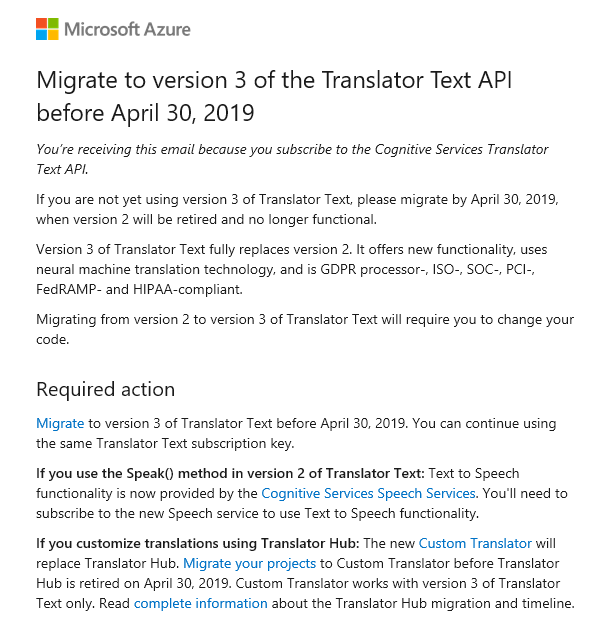 Has anyone done this yet? Are there any issues to be expected with the plugin?

Does the fact that nobody replied mean that nobody is actually using the translator plugin with Microsoft Translator API? In any case, if someone is using it, the good news is that Microsoft decided not to shut down version 2 of the API (yet): 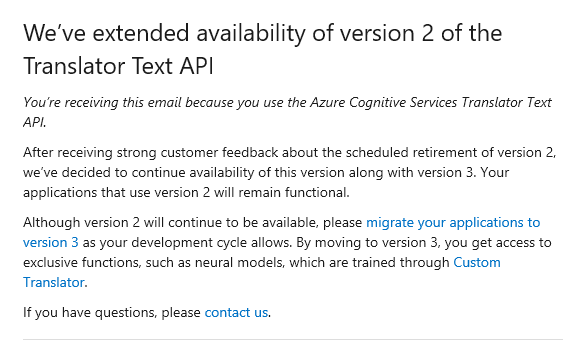 But the question remains: what needs to be done (and do the instructions need updating)? I am very hesitant to dive into that adventure because the last time I had to interact with Azure, it was a nightmare and if there are people who have less trouble finding their way around Azure, it would be great to learn from them…

One usefull bit of information I did find out is that version 2 of the API is not #gdpr compliant while version three is:

Neural translation with the V3 text API does not support the use of standard categories (SMT, speech, tech, generalnn).

You are using Version 3 of the Translator Text API If you are using the api.cognitive.microsofttranslator.com endpoint.

Okay, I did give it a try and logged into Azure and I even managed to find the translator service that I set up two years ago. But I have no idea what to do next.

Do I even need to do anything in my azure account or do I just need to change something in discourse? But the only thing that I can enter in discourse is the Azure Subscription Key.

I’m starting to suspect that the plugin is actually not compatible with the new translator API… For example, this blog post states:

At first glance, the biggest change between v2 and v3 is the output format. Previously it was XML, now JSON.

This sounds like the plugin needs to be changed to accept the new output format, right?

I’ve migrated the plugin to the new API

No action is required on the user’s end since the previous subscription key will still work.